The United States armed forces are not generally known to be staunch defenders of free speech, but that's the story that emerges from Molly Guptill Manning's fascinating new book When Books Went to War, a history of the American military's huge World War II program of printing and distributing books to service members. In 1944, with the presidential election looming, Republicans and Democrats in Congress fought over the details of a new system for tallying the troops' votes. When the Soldier Voting Bill was finally passed, Republican Senator Robert A. Taft quietly added a sweeping, vaguely worded amendment prohibiting the government from distributing any material that could be considered propaganda. For the military's Council on Books in Wartime, the amendment was a potential disaster for the popular program. The Navy protested that deleting politically offensive passages might "result in coloring the intent of the author" and giving the impression that soldiers were being presented with "half-truths." But the alternative—banning books outright—brought the council uncomfortably close to the Nazi’s vicious censoring of ideas that Americans were supposed to be fighting against.

The idea that "books were intertwined with the values at stake in the war" is central to Manning's study, which begins with an account of a book burning in Berlin in 1933, and describes how these public provocations shocked and enraged the foreign press. When the United States entered the war, it was American librarians who spearheaded a national campaign to collect books for soldiers and thus send them to the war zones armed with ideas. When the War Department took over in 1943, they worked with publishers to produce special lightweight volumes in a huge range of genres, from pulp cowboy novels to Victorian poetry, and murder mysteries to The Great Gatsby (the book includes an appendix listing all 1,200 titles.) They went to theaters all over the world, to black and white units alike, and even, if the titles passed the censors, to POW camps.

For the soldiers themselves, the books were more practical than symbolic. Homesick, bored and anxious, the young men seized on any reading material they could find to pass the time, and their letters vividly express the importance of the books (one private reports that "they are as popular as pin-up girls.") The huge reach of the Armed Services Editions (print runs began at 50,000 and grew from there) could turn a popular book into an instant classic. Betty Smith's 1943 novel A Tree Grows in Brooklyn—a coming-of-age story set among a poor but loving immigrant community in New York—resonated so deeply with the soldiers, who recognized its world as their own, that several were moved to write to the author. "A surge of confidence has swept through me and I feel that maybe a fellow has a fighting chance in this world after all," one battle-scarred young Marine told Smith.

In the wake of Senator Taft's Title V ban on the distribution of political material, the Council on Books in Wartime mobilized the media to protest censorship in the strongest possible terms. The spring and summer of 1944 saw a flood of furious editorials decrying the ban, while the council made sure that soldiers were well aware of its potential consequences. When Taft met with the army to discuss amending Title V, journalists overheard him claiming that three-quarters of soldiers would vote for FDR, and that overseas troops were so out of touch with current issues that they shouldn't be allowed to vote anyway. Once made public, his comments made the ban seem like a nakedly political ploy, and even his supporters backed away. Title V was amended so that the only permissible restriction on what books soldiers could read was the physical difficulty of transporting them.

We spoke to Molly Guptill Manning about the war books and their legacy. 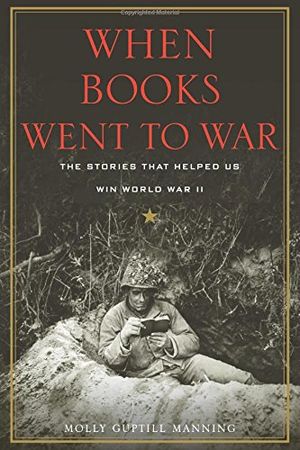 When Books Went to War: The Stories that Helped Us Win World War II

What were the origins of the Victory Book Campaign?

The book burnings in Germany in the 1930s sparked discussion in America and around the world about why books were under attack and how Americans could counteract this purging of ideas. In every country Germany invaded, books containing viewpoints antagonistic to the Nazi platform were destroyed. American librarians decided that the best way to fight back was to encourage Americans to read more, making books weapons in the "war of ideas." So they began collecting books to distribute to service members, which would provide much-needed entertainment and morale-boosting in the bare-bones training camps.

What came to be known as the Victory Book Campaign mobilized American civilians to donate 18 million books between 1942 and 1943. The librarians waged publicity campaigns, hosted collection contests, worked with organizations like the Boy and Girl Scouts for door-to-door collections, pitched stories to newspapers, and scattered book donation receptacles across their towns and cities.

Why did the donation campaign come to an end, to be replaced by the Armed Services Editions?

First, many of the donated books did not suit the reading tastes of young men (thousands of children's books were donated, for instance.) Librarians had to painstakingly sort the books they collected, in order to send only the best. And the donated books were primarily hardcovers, so as servicemen shipped out overseas, they proved too heavy and unwieldy to carry.

These problems exposed the need for paperback editions of books that young men would especially enjoy. American publishers banded together to form a group called the Council on Books in Wartime, and ultimately developed troop-friendly paperbacks called Armed Services Editions (ASEs), which were designed to fit in the hip or breast pocket of a military uniform and were printed in titles that soldiers eagerly snatched up.

How were the ASE books chosen? Were there any that struck you as especially surprising?

Great care went into choosing the ASE titles. Publishers first put together lists of bestsellers and other appealing titles; then a group of hired readers went through each book and highlighted any passages that were offensive, discriminatory or might give comfort to the enemy. These were reviewed more closely, and the Army and Navy had the final say.

The publishers were surprisingly liberal-minded when it came to the titles they printed. Rather than avoid books about Hitler or Nazi Germany, the council published Der Fuehrer: Hitler's Rise to Power, a biography of the Nazi leader by German-Jewish journalist Konrad Heiden. They also printed books considered indecent in the United States: titles such as Strange Fruit and Forever Amber were both banned in some states and cities because they contained sex scenes. [Strange Fruit, the story of an interracial romance, was also briefly banned from being distributed through the U.S. Postal Service, until Eleanor Roosevelt urged her husband to intervene.] The council’s hired readers urged against printing such "trashy" books, and the argument grew so heated that it was presented to the council's executive board, which ruled in favor of publishing them.

What was the lasting impact of the campaign?

The average WWII conscript had an 11th-grade education and did not read books. During the war, sometimes out of sheer desperation for something to do, the men would pick up books because they were the only entertainment around. Many service members came home with a love of books. Thanks to the popularity of the ASEs, publishers started to release cheap paperback editions for civilians, so veterans returned to a flourishing paperback trade.

The ASEs also motivated many GIs to go to college, having proven that they could enjoy reading and studying. Some two million veterans, who might never have enrolled in a university before the war, found themselves signing up for a free college education.

In 2002, the Legacy Project revitalized the ASEs and sent pocket-sized books to Americans serving around the world. Today, the Navy is distributing e-readers pre-loaded with popular books so service members always have hundreds of books at their fingertips. So the tradition of providing books to help men and women through their service far from home continues.