The headline said, “Bravery Wins Bronze Star,” but it was the picture that grabbed my attention. I had just entered the University of Wisconsin Law School. The image, in the Capital Times on September 29, 1967, took me beyond the arguments over war embroiling the nation. It showed the medal for combat valor being presented to the family of Thomas Broome, an 18-year-old killed in Vietnam. Photographer David Sandell froze the moment at the American Legion post in nearby Sun Prairie. 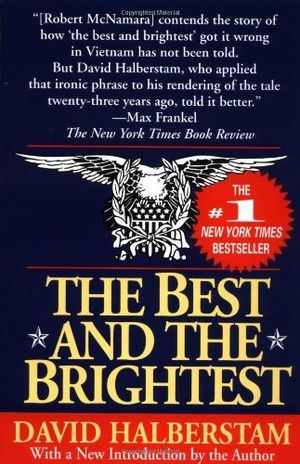 The Best and the Brightest

No matter what your position may have been or may be, this book fully and expertly explores the American foreign policy decisions and actions that led to this war and its execution and paints a clear picture of its catalytic role in the shaping of today's America.

Lt. Ron Weindel is handing the medal to Tom’s father, Stanley, who maintained the boilers for Wisconsin Porcelain—a job he loved so much he would later be buried in his bib overalls and engineer’s cap. In her grief, Tom’s mother, Alice, is like a figure in a Renaissance painting. The man in the Legion cap is Victor Ward, a World War II vet who had known Tom from birth. The girl is Tom’s sister, Fannie, 13. Behind her is Mayor Clarence Severson; Tom was the town’s first Vietnam death.

The young man is Tom’s brother, John, 17, who was leaving for the Army in ten days. He had promised that he wouldn’t go to Vietnam, but later went anyway, hoping it would connect him to the brother he missed. In Vietnam he operated a construction crane and won his own Bronze Star.

“We weren’t the only family that went through this,” says John, now a retired power plant worker. But for me, this extraordinary photo—with its panorama of complex emotions—will always stand for those who were lost and for everyone they left behind.

Penn Rhodeen is a writer who has practiced law in New Haven, Connecticut since 1971. He is the author of Peacerunner: The True Story of How an Ex-Congressman Helped End the Centuries of War in Ireland.