When the General Assembly of the United Nations opened 60 years ago this week, Fidel Castro, the revolutionary leader of Cuba, audaciously ensured that the world’s attention would be drawn to America’s “race problem.” On the evening of September 19, 1960, Castro—in New York for the international summit—stormed out of his plush midtown hotel following a fight over money. After a brief sojourn at U.N. headquarters, where he threatened to set up camp in the complex’s rose garden, he relocated to the Hotel Theresa, the so-called “Waldorf of Harlem.”

Harlem also boasted, however, an exceptionally strong sense of political vitality. Its streets fizzed with activism, as black nationalists and integrationists, Christians and Muslims, competed for influence, mobilized to protest inequalities, and organized to demand their rights. Two years prior, nine black mothers, outraged by the poor quality of the education on offer, kept their children out of the three all-black junior high schools to which they had been assigned and demanded that they be allowed to enroll them in better schools, elsewhere in the city (they won a partial victory several months later.) 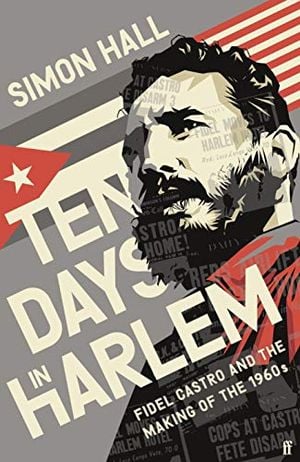 Police brutality, meanwhile, sparked growing pressure for meaningful reforms, as well as angry protests on the streets. On July 12, 1959, for instance, more than 500 black New Yorkers gathered outside a Harlem police station, after Charles Samuel, a black postal clerk, was beaten and arrested for intervening in the brutal arrest of Carmela Caviglione, who had been dragged away from a restaurant by her hair. And in the spring of 1960, months before Castro’s stunt, as the lunch-counter sit-ins rocked the Jim Crow South, the New York-based Congress of Racial Equality organized sympathy protests outside the F. W. Woolworth’s Store in Harlem.

Fidel’s sensational “Harlem shuffle” afforded him the opportunity to cause plenty of trouble for the American government. In fact, he had barely had time to check-in at the Theresa before his first guest came calling: the firebrand black nationalist, and rising star of the Nation of Islam, Malcolm X. Meanwhile, hundreds of African Americans gathered in the streets around the hotel every day, to cheer Fidel, who, on coming to power in Cuba, had outlawed segregation in schools, beaches, swimming pools, hotels and other facilities (both public and private) and committed his new government to racial equality.

Soviet premier Nikita Khrushchev had decided on a meeting with Fidel even before he had set sail from Kaliningrad, aboard the Baltika; mid-way across the Atlantic, he had confided to a close aide his hope that Cuba would become a “beacon of socialism in Latin America.”

Khrushchev also observed how the actions of the United States (which was increasingly hostile to the new revolutionary government in Havana) were, inexorably, pushing the Cuban leader closer to Moscow: “Castro,” he explained, “will have to gravitate to us like an iron filing to a magnet.” The Soviet leader well understood the romantic appeal of Castro’s revolution. But he was also keen to ensure that Cuba, and its leader – whom he had never met before – caused as much discomfort as possible to the United States of America. (A few months later, he would pledge support for “wars of national liberation” around the globe, as part of his efforts to extend Soviet influence and promote socialism across the developing world.)

On the morning of Tuesday, September 20, the Cubans had suggested that they would happily travel to the Soviet mission, on Park Avenue, but Khrushchev was having none of it. For one thing, he knew that a trip to Harlem would be a symbolic way to “emphasize our solidarity with Cuba and our indignation at the discrimination with which Cuba was being treated.” But, just as important, he understood that “by going to a Negro hotel in a Negro district, we would be making a double demonstration against the discriminatory policies of the United States of America toward Negroes, as well as toward Cuba.” It was a move also guaranteed to deliver newspaper headlines, both in the United States and around the world. Given the Cold War competition for “hearts and minds” across Asia and Africa, this was far too good an opportunity to pass up.

As Khrushchev’s motorcade approached the Theresa, the New York Herald Tribune described how it passed by “cut-rate department stores, cut-rate clothing, appliance, notions jewelry, and furniture stores, two huge movie theaters, the Harlem Lanes bowling alley, the Palm Café, and, on the corner diagonal to the hotel, a flashing neon sign proclaiming, ‘Herbert’s – cash or credit. The home of blue and white diamonds.” At 12:12 p.m., according to news reports, the Soviet leader arrived outside the Theresa.

Already, the area was packed with thousands of onlookers, as well as hundreds of police, including mounted units, detectives and security personnel. One member of Khrushchev’s entourage recalled how the noise was unbelievable. Antonio Núñez Jiménez, a senior Castro confidante who had been waiting patiently in the Theresa’s lobby, ran out to greet the Soviet leader and escort him inside. But as they made their way through the Theresa’s cramped, rather dreary lobby towards the rickety, manual-operated elevator, scuffles between Cuban, Soviet and U.S. security agents broke out. As the New York Daily News put it, in typically breathless style:

As he was ushered into Castro’s corner suite, which overlooked Seventh Avenue and 125th Street, Khrushchev was appalled by the poor state of the hotel: it was, he recalled in his memoirs, shabby and the “air was heavy and stale. Apparently the furniture and bedclothes had not been aired out sufficiently, and perhaps they were not, as we say, of the first degree of freshness – or even the second.” He was further shocked by the state of Fidel’s quarters: the bed was covered with books, and the floor littered with records, maracas and cigar butts. But while his suite reminded Khrushchev of a pigsty, the Cuban leader himself made a much more favorable impact: “This was the first time that I had ever seen him in person, and he made a powerful impression on me: a man of great height with a black beard and a pleasant, stern face, which was lit up by a kind of goodness. His face simply glowed with it and it sparkled in his eyes.”

The two men talked only briefly. Fidel “expressed his pleasure at my visit, and I spoke words of solidarity and approval of his policies.” “That was,” Khrushchev recalled, “all there was to it. . .”

Shortly after 12:30 p.m., they emerged onto the sidewalk, before crowds of cheering spectators, excited journalists and hundreds of police, who were desperately trying to maintain order. It was, declared the New York Times, “the biggest event on 125th Street” since the funeral of W. C. Handy, the “father of the blues,” two years earlier.

As the photographers snapped away, Khrushchev and Castro embraced. Given the physical disparities between them, it was a moment fraught with danger. As Khrushchev put it, “we enclosed each other in an embrace . . . He bent over me as though covering my body with his. Although my dimensions were somewhat wider, his height overpowered everything. Besides, he was a solidly built man for his height.”

While Castro returned to his suite, to feast on T-bone steak (medium-rare), candied yams, French fries and a thick chicken soup (all prepared by the Theresa’s chef, Marion L. Burgess, under the watchful eye of two Cuban officials), Khrushchev headed back to the Upper East Side, the cheers of the crowds still ringing in his ears.

Two days later, when President Dwight D. Eisenhower deliberately excluded Fidel from a lunch for Latin American leaders at the Waldorf-Astoria, the Cuban prime minister treated 12 black employees of the Theresa to steak and beers, while declaring himself “honored to lunch with the poor and humble people of Harlem.” He of course made sure to invite the press along, too.

It was impossible to escape the broader consequences of Fidel’s move to the Theresa. According to one Havana radio station, by moving uptown Fidel had “pulled aside the screen” and shown the world how African Americans were “kept apart in a quarter as if they had the plague.” Fidel’s move to Harlem was especially embarrassing for the U.S. government precisely because it challenged directly the story about race relations that they liked to tell, both to Americans and to the wider world. They sought to frame segregation and institutionalized white supremacy as a regional problem, largely confined for historic reasons to the South. The Eisenhower Administration, through a combination of court rulings, federal legislation and carefully crafted initiatives, was attempting to show the world that the nation’s race problem was in the process of being eradicated in a peaceful and democratic manner, as mandated by the country’s constitutional form of government. By shining the world’s media spotlight on Harlem, Castro exposed this as little more than a self-serving myth: the stain of segregation was alive and well in the urban north, including in New York, one of the country’s most famous and important cities, and a citadel of mid-century American liberalism.

Today, of course, the world does not need a Fidel Castro to draw international attention to the racism that continues to blight the “Land of the Free.” The police killings of Breonna Taylor, George Floyd and countless others—killings often captured on, or publicized through the power of, social media—mean that discussions of institutional racism, as well as mass protests for systemic and meaningful change, are operating at an intensity and on a scale that has not been seen for nearly 60 years.

When Fidel rocked up at the Theresa, in September 1960, the United States was on the eve of a historic presidential election, and in the midst of surging civil rights protests that augured a decade of liberal reforms and social activism that would define the coming decade and transform the nation – largely for the better.

Historians are notoriously bad at predicting the future, and 2020 is not 1960. But, as the saying apocryphally attributed to Mark Twain goes, while history may not repeat itself, it does sometimes rhyme.

Simon Hall held a Fox International Fellowship at Yale before moving to the University of Leeds in 2003, where he is currently Professor of Modern History. His new book, “Ten Days in Harlem: Fidel Castro and the Making of the 1960s” is published by Faber & Faber. Follow him on Twitter at @simonhallwriter.