Doors are kicked in, belongings are tossed on the street or carted off to high-cost storage, and evicted families are forced to move into another squalid rental or worse. That may sound like an endpoint, but often it’s just a wrenching start, leading to a deeper morass of lost jobs, missed school, family breakups, hunger, depression.

In an effort to comprehend the experience of impoverished families struggling to survive and hold onto their homes, sociologist Matthew Desmond moved into a trailer park and a rooming house in two blighted areas of Milwaukee. During 2008 and 2009, he documented the stories of eight families and two landlords, capturing how the toxic mix of extreme poverty and economic exploitation can leave individuals unable to keep a roof over their heads. The result, a widely acclaimed New York Times bestseller, is Evicted: Poverty and Profit in the American City. While his focus was on one troubled city, Desmond’s often heartbreaking account also explains how the reality of eviction touches millions of families across the United States.

Desmond, a 36-year-old Harvard University professor and 2015 MacArthur “genius” grant winner, drew on a rich history of ethnographic storytelling for “Evicted,” much of which has focused on the social and economic inequities of urban life. It’s an interest not recently discovered: Desmond, who grew up in Winslow, Arizona, first began researching the problems of homelessness while an undergraduate at Arizona State University. Inspired by detailed, on-the-ground observations and encounters of social scientists, journalists and novelists dating back to the 1890s and the Progressive era, Desmond recognized that ethnography “is what you do when you try to understand people by allowing their lives to mold your own as fully and genuinely as possible.” 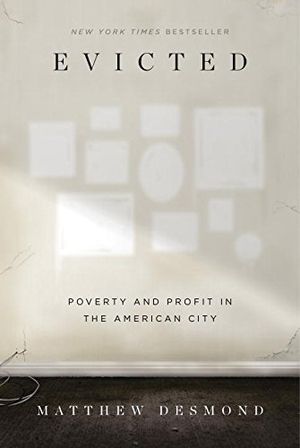 Evicted: Poverty and Profit in the American City

In this brilliant, heartbreaking book, Matthew Desmond takes us into the poorest neighborhoods of Milwaukee to tell the story of eight families on the edge.

You made the choice to focus on personal stories rather than policy. Why?

I was living in this trailer park in the inner city and met all these people who were very complex and compelling. Their lives were presenting me things that I needed to try and understand. So I thought the power of the work was ultimately in their stories. My job was to write about their lives with as much complexity and humanity as I could and earn the policy implications at the end. It needed to be at the end after the readers saw the wreckage first-hand—what this problem was doing to them and their families. And I think that means getting very close to them and writing about their lives in an intimate way.

How important is the tradition of ethnography to what you have written?

Central. This is a long intellectual tradition that I study and restudy. There are ethnographic books that I have read literally dozens of times. Books like Harvey Zorbaugh’s The Gold Coast and the Slum, a 1929 ethnography of Chicago about the ecology of different neighborhoods and how they fit together. The other end is “Black Metropolis,” a 1940s magisterial, exhaustively researched tome about the black belt in Chicago and all its varieties. Then came a wave in the ‘60s, including Elliot Liebow and Talley’s Corner, a brilliant book that is something I’ve memorized in a way. And there’s the anthropological tradition, reading folks like [Bronislaw] Malinowski, Claude Levi-Strauss and Margaret Mead. The New Journalism also was important to me, teaching me to write about life in a way that stays on the ground, like Joan Didion, Tom Wolfe and Joseph Mitchell writing for The New Yorker. Then there’s this amazing tradition coming from within the African American community, which is very ethnographic, like Ralph Ellison with Invisible Man and James Baldwin writing about life in Harlem.

What about turn-of-the-century writers like Jacob Riis, whose ethnographies not only provided insights but were part of a progressive tradition to influence social problems?

You read Jacob Riis [How the Other Half Lives, 1890], going into these tenements and documenting the life and the squalor and writing about it in a clear-eyed and compassionate way—those stories are deeply connected to the poor. And that was my wager with their world: If I get down onto the ground with this problem, try and see it as closely as I could and write about it with complexity and humanity, maybe that would make a difference in and of itself.  I am heartened by the fact that we have this wonderful tradition of ethnography and in-depth journalism that’s focused on these moral questions and made a difference.

Are there any other important influences?

I think I’ve read all of W.E.B. Du Bois, which is a lot. He started off with comprehensive field work in Philadelphia, publishing a book in 1899 called The Philadelphia Negro. It was this wonderful combination of clear statistical data and ethnographic data. He also wrote with moral clarity and urgency. One of the reasons he’s stood the test of time isn’t just his intellectual vision, but he also wrote beautifully.

If you were writing 100 years ago, how different would the result be?

So that’s sort of a good news story here, actually. If I wrote in Jacob Riis’ time, I’d be writing about teeming slums in our cities and kids dying of tuberculosis or outhouses in Philadelphia or kids losing their toes because they were living in homes without heat. He took on a battle in The Battle with the Slums—and we won. I’ll be the first to admit—and Evicted is pretty clear about this—we have a long way to go. But we made enormous strides in terms of housing quality.

And what about 50 years ago?

If I wrote in Michael Harrington’s time, roughly 50 years later when he published The Other America [1962], I’d still be writing about poverty, and also entrenched racial injustice. This is also a world without food stamps and without a major investment in the welfare of families. It’s hard for us to remember that poverty in Harrington’s day was much, much harder and deeper.

How has working on this book affected your life?

When I was doing it, it was about letting their problems become your problems. It was about being very open on a day-to-day basis to what was going to happen—sleeping at their houses, watching their kids, going to funerals with them, sitting at AA meetings with them, going to worship services with them. So letting their lives become a little bit like your life. In the long run, it’s given me friends who I still talk to a lot. It’s given me relationships. You’re trying to make a difference—you know people that are intimately affected by these issues, and I think it raises the stakes.

It’s not an abstraction.

It’s not an abstraction. It’s not a dorm room debate. It’s not like, ‘What would that ideal utopian world look like?’ We have a problem; I have people that I admire that are being crushed by this problem. What can we do? That has driven my thinking about the policy implications. What is realistic and doable and powerful?

You wagered that the book would enter into the public discourse and make a difference. Has that worked out?

It’s too early to tell. We’re having a larger conversation in the country about inequality today and there are a lot of different people coming to my talks. Tenants are coming, landlords are coming, all sorts of heroes that have been struggling with these issues for years and years. Community organizers, folks who work with the homeless, lawyers working on these issues and policymakers at all levels of government are talking about this. They haven’t had a book that reflects these issues for a broader audience.

So what has this work taught you about the character of America?

One thing is there is so much more potential here than we allow to blossom. You meet folks who are funny and really smart and persistent and loving that are confronting this thing we call poverty, which is just a shorthand for this way of life that holds you underwater.  And you just wonder what our country would be if we allowed these people to flourish and reach their full potential. But I’m optimistic about the character of America—optimistic that there are a lot of people who care deeply about this and we can make a difference.

Steven Beschloss, author of The Gunman and His Mother, has been published by The New Yorker, The New York Times, The New Republic and many others.