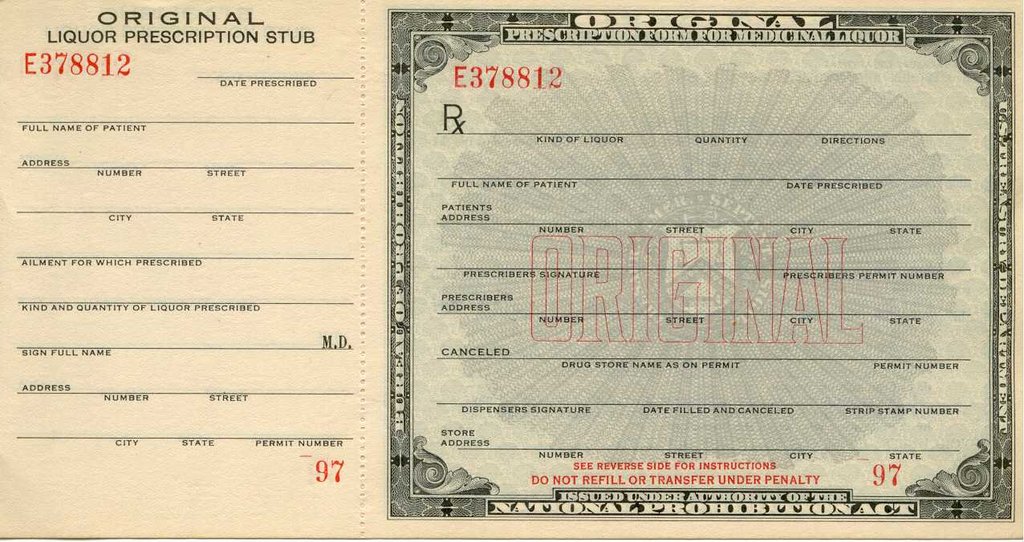 Perscription for alcohol used during Prohibition. (Text by Megan Gambino.)

Rub a little whiskey on a baby’s gums. You’ve probably heard that home remedy for teething. But, what about a few teaspoons of bourbon to nip asthma symptoms or some sips of brandy to treat diabetes?

During Prohibition, the U.S. Treasury Department authorized physicians to write prescriptions for medicinal alcohol. Licensed doctors, with pads of government-issued prescription forms, like the one shown here, advised their patients to take regular doses of hooch to stave off a number of ailments—cancer, indigestion and depression among them.

This privilege was one of the few legal exceptions to the 13-year ban on the production, sale and distribution of alcohol, initiated in 1920 by the 18th Amendment. The National Prohibition Act, which enforced the ban, also allowed farmers to produce wine for their own consumption and priests, ministers and rabbis to serve it during religious ceremonies.

“Presumably, doctors were doing examinations and diagnoses, but it was mostly bogus,” says Daniel Okrent, author of Last Call: The Rise and Fall of Prohibition

. Every ten days, patients willing to pay about $3 for a prescription and another $3 or $4 to have it filled could get a pint of booze. “There may have been some people who were being prescribed because there was a perceived medical need, but it was really a way for some physicians and pharmacists to make a few extra bucks,” he says.

Click on the bullseyes within the document to learn more about this short-lived practice.