He stands on the deck of the USS Malvern in December 1864, under the lens of Alexander Gardner, one of the country’s most famous photographers. He is the youngest lieutenant commander in the Navy, and in fact the Malvern is his ship, although his posture in this unusually casual portrait—recently donated by the collector Peter Tuite to the U.S. Naval Academy Museum in Annapolis, which has granted Smithsonian permission to publish it for the first time—is more a pool sharp’s than a naval officer’s. No matter. He has just returned from a whirlwind leave in which he was awarded the Thanks of Congress, promoted a full rank and honored in New York, Philadelphia and tiny Fredonia, New York, his hometown.

Only four years before, he was expelled from the Naval Academy in his senior year. (He had “a talent for buffoonery,” a superior observed.) But soon he was readmitted to the service, where his talent for combat was never more evident than in late October, when he led his men up the Roanoke River to Plymouth, North Carolina, on what was regarded as a suicide mission—to sink the CSS Albemarle, a 158-foot ironclad that had run the Army out of Plymouth and the Navy off the Roanoke. Under fire from the ironclad and from shore, his launch steamed full speed ahead into a log boom built to foil raiders, mere feet from the Albemarle. As Rebel gunners struggled to aim a cannon low enough to destroy him, he slipped a mine known as a spar torpedo into the river. Standing coolly in the prow of his launch, he waited. Bullets hit his sleeve and his boot; buckshot removed the back of his coat; still he waited for the torpedo to drift under his target. Just as the Rebel cannoneers fired (and missed), he pulled the detonation cord. Minutes later, the Albemarle was sunk.

Now he is back with the fleet, under Adm. David Porter, the hero of Vicksburg. It is Porter who stands behind him, scowling under his Brillo beard. Nonetheless, the admiral waits for the lieutenant commander. He is William Barker Cushing, and his face is on the cover of Harper’s Weekly. He has just turned 22, and youth must be served. 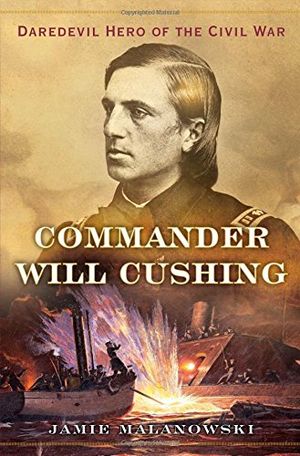 Commander Will Cushing: Daredevil Hero of the Civil War