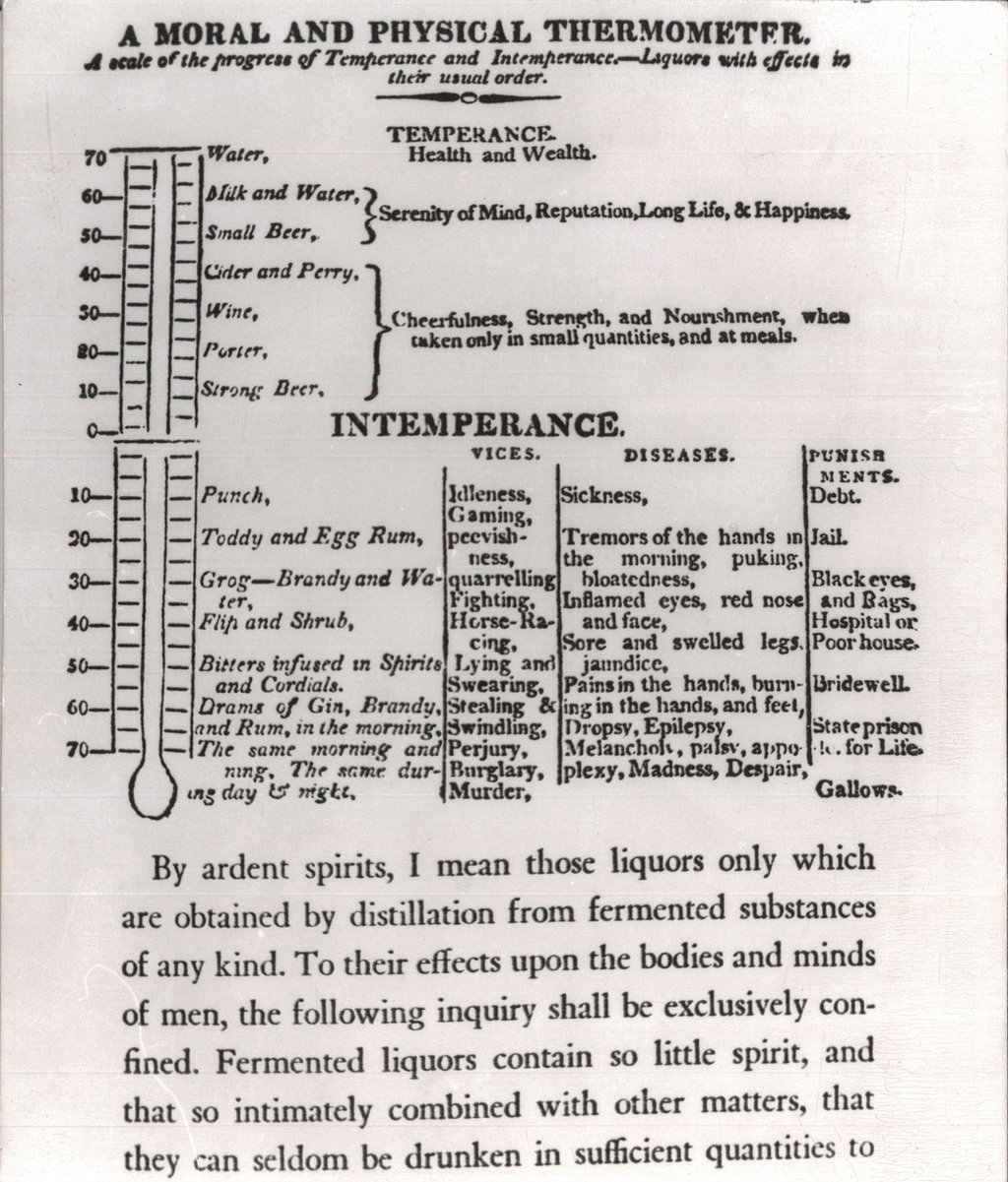 After the Revolutionary war, Americans were drinking staggering amounts of alcohol. Tastes were swiftly changing from ciders and beers, the preference of colonial times, to hard liquors from the nation’s earliest distilleries. By 1830, each person, on average, was swilling more than seven gallons of alcohol per year.

“The tradition in a lot of communities was to have a drink for breakfast. You had a drink mid-morning. You might have whiskey with lunch. You had a beer with dinner, and you ended with a nightcap,” says Bruce Bustard, a curator at the National Archives in Washington, D.C. “There was a fair amount of alcohol consumption by children too.”

So, when Benjamin Rush, a signer of the Declaration of Independence and foremost physician, spoke of the evils of hard liquor, people thought he was nuts. He published an essay, “An Inquiry Into the Effects of Ardent Spirits Upon the Human Body and Mind” in 1785, and to a later edition of the essay, released in 1790, he attached a dramatic illustration titled “A Moral and Physical Thermometer.”

The thermometer, now on display in “Spirited Republic: Alcohol in American History,” an exhibition at the National Archives through January 10, 2016, charts the medical conditions, criminal activities and punishments that could come from the frequent drinking of particular cocktails and liquors. Punch, for instance, could cause idleness, sickness and debt. Toddy and egg rum might elicit peevishness, puking and a trip to jail. And, drinking drams of gin, brandy and rum day in and day out was rock bottom as far as Rush was concerned. That habit could lead to murder, madness and, ultimately, the gallows.

Already a vocal proponent of women’s rights and mental health and prison reform, Rush emerged as a great champion of temperance, says Lender. His ideas may have been shocking in his time, but his essay became a bestseller and gradually much of the medical community would see, like he did, that chronic drunkenness itself was a disease. In the 1820s, when the temperance movement was picking up steam, early advocates adopted Rush’s thinking, cautioning against distilled liquors while condoning the drinking of beer, cider and wine in moderation. This distinction between hard liquors and other alcoholic beverages later fell away with the decades-long push for teetotalism, or a complete abstinence from alcohol. Prohibition took effect in 1920, and the 21st amendment repealed the ban on the production, sale, importation and transportation of alcohol 13 years later.

“The conception we have of addiction today can generally be traced back to Benjamin Rush,” says Lender. “There was a point, Rush believed, that the substance, in this case alcohol, controlled the individual rather than the other way around. He thought there was a physical dependence engendered in the body. He was a pioneer.”

Click on the pins on the document to learn more.

“Spirited Republic: Alcohol in American History” is on display in the Lawrence F. O’Brien Gallery of the National Archives through January 10, 2016.