A notorious quack peddled cures at an Arkansas resort in the 1930s. Nowadays the con game is all for show 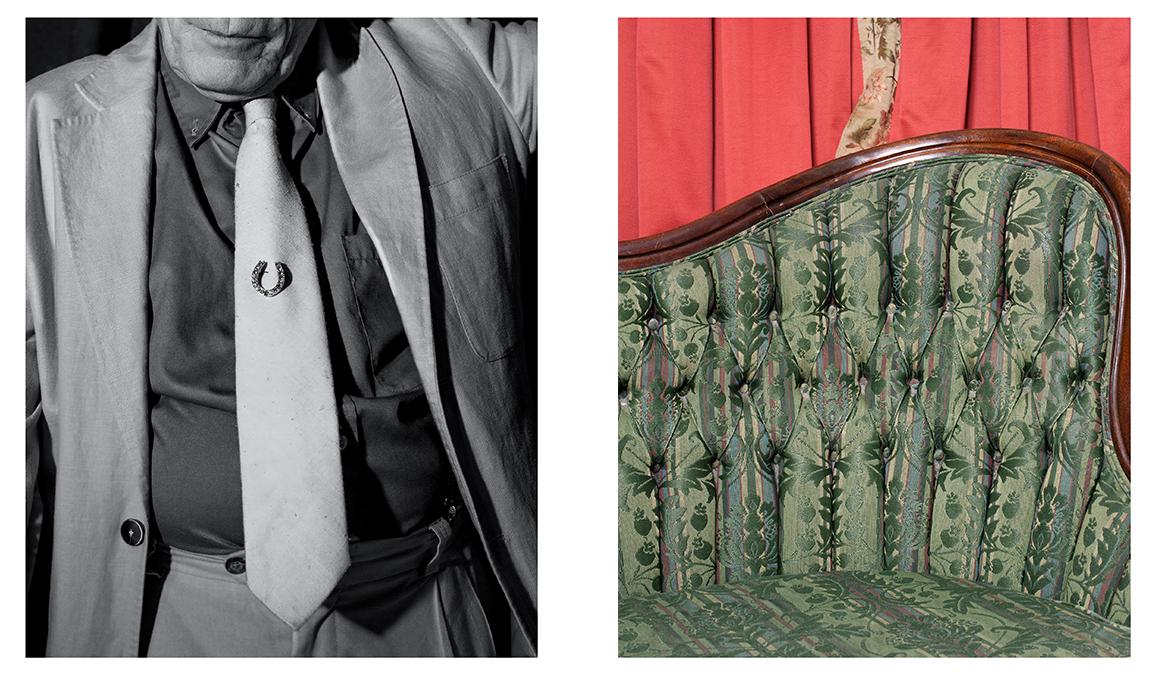 Left, local actor Keith Scales portrays Norman Baker in a one-man show at the Crescent Hotel and is an encyclopedia of information about Baker’s time in Eureka. Right, detail of a couch and drapes in the Governor’s Suite, formerly Baker’s office, at the hotel. Antone Dolezal & Lara Shipley

They found the bottles buried on the edge of the woods behind the hotel last spring. Specimen bottles mostly, each about the size of a jam jar give or take, many intact, some still filled with clear liquid yellowing to brown then molasses black, the wax and rubber seals of the glass stoppers cracked but somehow holding after 80 years in the ground; others pristine, as if they’d just been shipped from the lab. In the first hour or so the groundskeeper unearthed scores of them, but even in the bright light of morning it was impossible to judge which body parts they held. By the end of that day the staff had pulled hundreds from the tree line down the hill and everyone in Eureka Springs knew what they’d found. The next day everyone in Arkansas knew and by the end of the week everyone in America knew they’d found bottles and jars and “body parts” behind the Crescent Hotel, and that the sheriff and the coroner had come and gone, and the archaeology team from the university in Fayetteville was on its way.

Built in 1886, the Crescent Hotel in Eureka Springs, Arkansas, is the grandest resort in the Ozarks. By the time of the Great Depression it sits empty. In 1937 it becomes the Baker Hospital. Norman Baker claims to have a cure for cancer. The colorful mailers and brochures he sends out refer to the area as the “Switzerland of America,” under the cheery banner, “Where Sick Folks Get Well,” and promise that cancer is curable without the knife or radium or X-ray. But Norman Baker is a quack. That’s why the medical board ran him out of Iowa, then chased him down to Mexico.

He is conventionally handsome. Sharp-featured and clear-eyed. Confidence-inspiring, straight out of a B-movie casting call, he has a well-cut head of distinguished gray hair and a strong jaw balanced on a celluloid shirt collar. Is the gaze level? The handshake firm? Are the palms cool and dry? You bet.

His patients—the suckers and the gulls and the true believers—are weak with sickness, desperate, pale. They come from everywhere, and pay cash for the treatments. They pay and pay. Baker promises life, he promises vigor. No surgery. No radiation. Just Formula 5 and the power of positive thinking.

In the leanest years of our history, he doesn’t hide the money he grifts from the sick and the hopeless, he broadcasts it. He brags it. He is loud with it. He is the picture of vulgar American excess.

“Formula 5” is alcohol, glycerol, carbolic acid, ground watermelon seed, corn silk and clover leaves. It is administered by injection at the site of the cancer —up to seven times a day. Baker stole the recipe from another con man. It does nothing.

Illness is an island. There is no loneliness like sickness. You feel it in these rooms. Not isolation, but
desolation.

The Crescent, restored, is still open and more popular than ever. In part because it bills itself as America’s Most Haunted Hotel. On the ghost tour they tell you these stories: Michael, the stonemason flirt from Ireland falling to his death during the hotel’s construction, now and forever romancing guests in Room 218; Breckie, the 4-year-old boy taken up by illness a hundred years ago, lately playing in the hall and photobombing tourist selfies and snapshots; Theodora, 80 years dead and still trying to find her key in front of Room 419, an obsessive-compulsive packer of guest suitcases when angry; the Nurse, pushing a gurney through eternity on the third floor; and perhaps most famously, the Girl in the Mist, who from time to time to time—always around 10:30 in the moonlight—will fall or fling herself from one of the east side balconies into the garden below. She is shrouded in mist as she falls, as is her story. There’s no record of an event like this at the hotel, but folks claim to have seen the ghost, a white radiance plummeting from darkness to darkness, and they wonder...was she pushed? Did she jump? Was she—is she—a character straight out of Dreiser, pregnant and unwed and ruined, killed by despair and Victorian convention?

Here the implausible yields to history, as the hotel was, for a few years anyhow, a distinguished college and conservatory for young women. From 1908 until 1924 the hotel bolstered its summer tourist revenue by becoming a destination boarding school for the edification of American womanhood. According to the Encyclopedia of Arkansas, an early advertisement in Cosmopolitan magazine reads as follows:

But there’s no evidence that any fallen or falling woman was a student.

On the fourth floor, in what used to be the faculty lounge, is now a small museum and library where the history of this place is made vivid. Historian and artist and storyteller Rebecca Becker keeps the memory of the conservatory days alive. There are exhibits and display cases and even a small stage. And Keith Scales is in charge of the ghost tours that begin here, and the ghost stories, and they work together to make the hotel the lively old dame she is.

The Ozarks are a crossroads, and over the last 10,000 years or so Eureka Springs has attracted pilgrims and seekers of every kind. It was said the waters healed the sick and made you whole again, so the Osage chief who carved out the holy basin next to the spot where the Basin Park Hotel now stands on Spring Street would recognize the impulse if not the architecture. This has always been a boom-and-busttown and a hide-out and a rest cure, a place to lay low or live high. Bank robbers, bootleggers, railroad magnates and cathouse madams all made their fortunes here. Gangsters from Chicago kept the hotels and roadhouses and nightclubs busy after World War II, and when the local economy swooned in the 1970s, hippies saved the place and its storied gingerbread homes and it became an arts oasis. It remains so.

Over the years, Scales has performed a one-man Norman Baker show many times on that small upstairs stage. He and Becker do their best to make the Crescent a history project rather than merely a haunted house.

In addition to the ghost tours and the haunted hotels and the springs and the baths, Eureka Springs has galleries and restaurants and bars and a beautiful old Carnegie library. There is a Passion play here as well, and an opera company, and the Christ of the Ozarks statue, seven stories high.

The eroded Ozarks Plateau upon which all this rests is hundreds of millions of years old. Walk ten feet into the trees and you’re part of prehistory. The woods resonate with that ancient animism. The forests hum with it. You can hear them breathe.

There’s something heavy in the quiet here, though, some weight to the air. Especially at sundown, or right before dawn when the mist hangs in the cuts and hollows. There’s something eerie in it, dreamlike, something deep and uneasy.

In the hotel, it’s the same. Every stairwell and landing is fraught, every empty hallway feels crowded, and every room you enter feels as if someone just left. You are alone but never alone here. And to the suggestible, to the willing, that’s the point of the place. To be a little frightened by the supernatural. To feel alive in the company of the dead. In the dark, everything is a ghost story.

But even the skeptical are moved here—if not to fear then to sadness. The sharp historical sense of dread and of pain and of loss can be overwhelming if you open yourself to it. Because worse than any monster is a man like you or me. Weak. Greedy. Unaccountable. Selling hope to the hopeless. If you checked in to the Baker Hospital, your room holds everything you ever lost.

The morgue smells of dust. It smells of dampness and dust and stone. It holds the heat of the day in the front room, but the farther in you walk, the cooler it gets. The morgue is not in the basement, but it is dark and low-ceilinged and you imagine the weight of the hotel on top of you. The refrigerator where they kept the bodies is the last stop on the ghost tour. In an alcove are shelves with more of the specimen and sample jars of the kind that were found down the hill. Many of these hold indeterminate bits of flesh and were displayed in the lobby of the hotel when it was the cancer “hospital.” There was a “ghost sighting” in this room—right where you’re standing—on a recent ghost-hunters’ TV show. It plays on a loop behind you.

There’s a commercial kitchen utility counter and sink against one wall, which some people mistake for an autopsy table. The morgue was probably a pantry, but for the few years of Norman Baker’s Cancer is Curable Hospital, the dead were brought down here to wait for the hearse from the local funeral home.

On the day Germany invaded Poland, September 1, 1939, Norman Baker was arrested for mail fraud. That’s how they got him: the brochures. He was tried and convicted and sent to Leavenworth. Norman Baker was a charlatan in the long terrible tradition of American charlatans. A liar and a thief who sold broken promises. Norman Baker died a Florida retiree in 1958. He had cirrhosis. And cancer.

“I think they’re pig parts,” Scales says of the contents of the specimen jars. Not surgical excisions. Not even human bits cribbed from the local mortician. Pickled trims and ends bought from the local butcher, maybe; or specimens ordered from a medical school supply house. We’ll get the results once the university tests them.

But the jars will make no sense even then, even as an advertising device. Baker claimed to cure cancer without surgery. Why bother displaying fake tumors?

So maybe in the middle of that first long night you wake. You fumble for the light and walk to the window. Behind you the old hotel creaks and groans. Outside, the invisible valley is all silence and darkness. What you see on the glass is your own reflection. The only ghost in this room is you.

Lara Shipley is an assistant professor of photography at Michigan State University.

Antone Dolezal is a visual artist who incorporates photography, video, sound, text, bookmaking and archives in his work.