Michael Cudlitz remembers the moment clearly. He was standing on a dike in Europe while filming episode five of “Band of Brothers,” the epic 2001 HBO miniseries about American soldiers fighting in World War II. With blaring lights and cameras rolling in the background, he fired furiously at the actors playing German soldiers.

Cudlitz fumbled as he pressed a new clip into his M1 Garand rifle, then brought the weapon back to his shoulder. Shooting blanks, he took aim at a soldier dressed in a Wehrmacht uniform and squeezed the trigger, watching the “enemy” fall to the ground.

“I call it my holy shit moment,” says the actor, who portrayed cigar-chomping staff sergeant Denver “Bull” Randleman. “There is the smell of cordite and sulfur in the air. For a second, you feel like you caused that. There is something very visceral about it. We got the tiniest taste of what these guys might have gone through.”

“Band of Brothers” first aired 20 years ago, on September 9, 2001—two days before the 9/11 attacks shook the country. The Emmy Award–winning production offered viewers a gritty look at the lives of soldiers on the front lines of World War II’s European theater, realistically showing what the men experienced in combat and how they put their lives on the line for their beliefs.

Produced by Tom Hanks and Steven Spielberg, the miniseries is based on historian Stephen Ambrose’s bestselling 1992 book of the same name. Both follow the real-life experiences of Easy Company, part of the 506th Parachute Regiment of the 101st Airborne Division, from basic training through the end of the war in Europe.

James Madio, who costarred in the ten-part miniseries as T-4 Frank Perconte, says that “Band of Brothers” changed him and all those who watched it. He went from a World War II “illiterate” to an active supporter of veteran causes.

“When you look back and think of the bravery and camaraderie and the sacrifice of that generation and how unified America was because we were attacked, the story continues to gain strength as it goes,” says Madio, who has also appeared in Jersey Boys and Basketball Diaries. “To some degree, we wish we could go back to that American way.”

Two days after the series’ premiere, the United States suffered the most significant attack on American soil since Pearl Harbor. Peter Crean, a retired Army colonel who served in both the 101st Airborne and 82nd Airborne, remembers 9/11 well. Just after learning of the attack, the then–35-year-old soldier wrote a portent passage in his Palm Pilot: “My generation just had its Pearl Harbor. We are at war and we don’t even know who with yet.”

“Just like the real ‘Band of Brothers,’ we were in a war we didn’t ask for,” says Crean, who lost two friends at the Pentagon on 9/11 and now serves as vice president of education and access at the National World War II Museum in New Orleans. “They were civilian soldiers who defended their country after it was attacked. The book and series showed us that we had been here before and we would get through this.”

From the beginning of the project, the actors understood they were participating in something special. Hanks and Spielberg, who had filmed the equally realistic, albeit fictionalized, Saving Private Ryan three years prior, spared no expense in making the miniseries as accurate as possible. Uniforms, weapons, scenery—everything was exact to the tiniest detail. With a budget of $125 million, “Band of Brothers” was then the most expensive production of its kind. 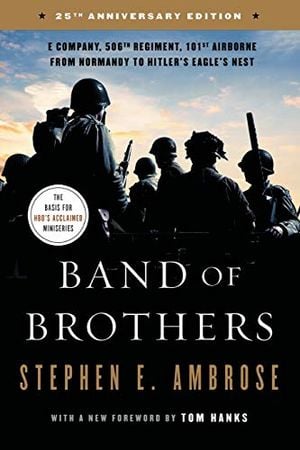 Stephen E. Ambrose’s classic bestseller and the inspiration for the acclaimed HBO series about Easy Company, the ordinary men who became the World War II’s most extraordinary soldiers at the frontlines of the war's most critical moments

Easy Company’s 140 paratroopers were dropped behind German lines on D-Day, June 6, 1944. They could only hope that the amphibious landings at Normandy would succeed, giving them the chance to survive what could have easily been a suicidal mission.

The unit managed to successfully link up with American soldiers advancing from the Omaha beachhead. Under the command of legendary Army officer Richard Winters, Easy Company went on to participate in the liberation of France, the attempted liberation of Holland in the botched Operation Market Garden, the defense of Bastogne during the Battle of the Bulge, the liberation of concentration camps, and the capture of the Eagle’s Nest—Hitler’s hideaway in the Bavarian Alps.

Each episode in the HBO series began with interviews featuring the real-life soldiers. (As a segregated unit, all of Easy Company’s paratroopers—and the actors who later portrayed them—were white, with Irish, Italian, Jewish or German American heritage, among other European backgrounds.) Then in their 70s and 80s, the men discussed their experiences and offered insights on how the horror of being in battle affected them. Today, most—if not all—of the original members of Easy Company are deceased.

Both Madio and Cudlitz formed close bonds with the real soldiers they played. Like the rest of the cast, they spent time with the men and their families, learning about who they were in order to develop their characters.

“I must have stared at my phone for 45 minutes before I called [Randleman] for the first time,” Cudlitz, who is also known for his roles in “The Walking Dead” and Grosse Point Blank, recalls. “I kept going over in my head how I was going to start this conversation. And the more I did that, the stupider it sounded. I wanted to get it right. I mean, that was the point behind the whole project: We wanted to get everything right.”

Madio, who was only 26 when filming began, says he knew nothing about World War II, let alone the Normandy invasion, before winning the role. He was a quick study, though, and became extremely close to Perconte—so close, in fact, that Perconte asked the actor to attend a reunion with him and other veterans in Europe after the show wrapped.

“Frank had just lost his wife, and his son couldn’t go on the tour,” Madio says. “He asked me if I would go with him. I spent two weeks with Frank and the other vets as we went around Normandy, Holland and Germany. It was amazing.”

The miniseries experience left most of the actors feeling like they were indeed a band of brothers. (The phrase refers to a passage from William Shakespeare’s Henry V: “From this day to the ending of the world, / But we in it shall be remember’d; / We few, we happy few, we band of brothers.”) Before production began, the group attended a “mini bootcamp” where they trained, drilled and learned how to be World War II soldiers. Filming, combined with getting to know the men they were portraying, left the actors with an intense feeling of solidarity.

“We get together once a year at my place in Los Angeles,” Cudlitz says. “Whoever is in town shows up.”

He adds, “We’ve also bonded with the [veterans’] families. We told the stories of their fathers, grandfathers and great grandfathers with respect, reverence and love.”

“Band of Brothers” was a life-changing experience for Madio. He came away with a deep admiration for the Greatest Generation and its sacrifices, and he continued to wear the dog tags he’d received during production for two years after the show ended. Today, Madio volunteers with the United Service Organizations (USO) to entertain American troops in faraway places.

“It changed me as a young man,” he says. “I was this kid from the Bronx with no education on World War II. I went to Europe for a year and got to meet these guys who fought there. It taught me respect and understanding for what they did. It shaped me into the man I am today.”

Madio and Cudlitz regularly participate in “Band of Brothers” trips sponsored by the National World War II Museum. Both plan to be a part of the museum’s 20th anniversary program, which is scheduled for January 8, 2022, in New Orleans. The symposium will be livestreamed for virtual audiences free of charge.

Twenty years later, “Band of Brothers” continues to resonate with audiences. The message of sacrifice for a cause greater than the individual—along with the realistic portrayal of the average American at war—reminds viewers of how the country can coalesce into a formidable force when it needs to.

“‘Band of Brothers’ is important because it shows ordinary people doing extraordinary things,” Crean says. “These were citizen soldiers. None of these men planned to be in the military. They answered the call when their country needed them.”