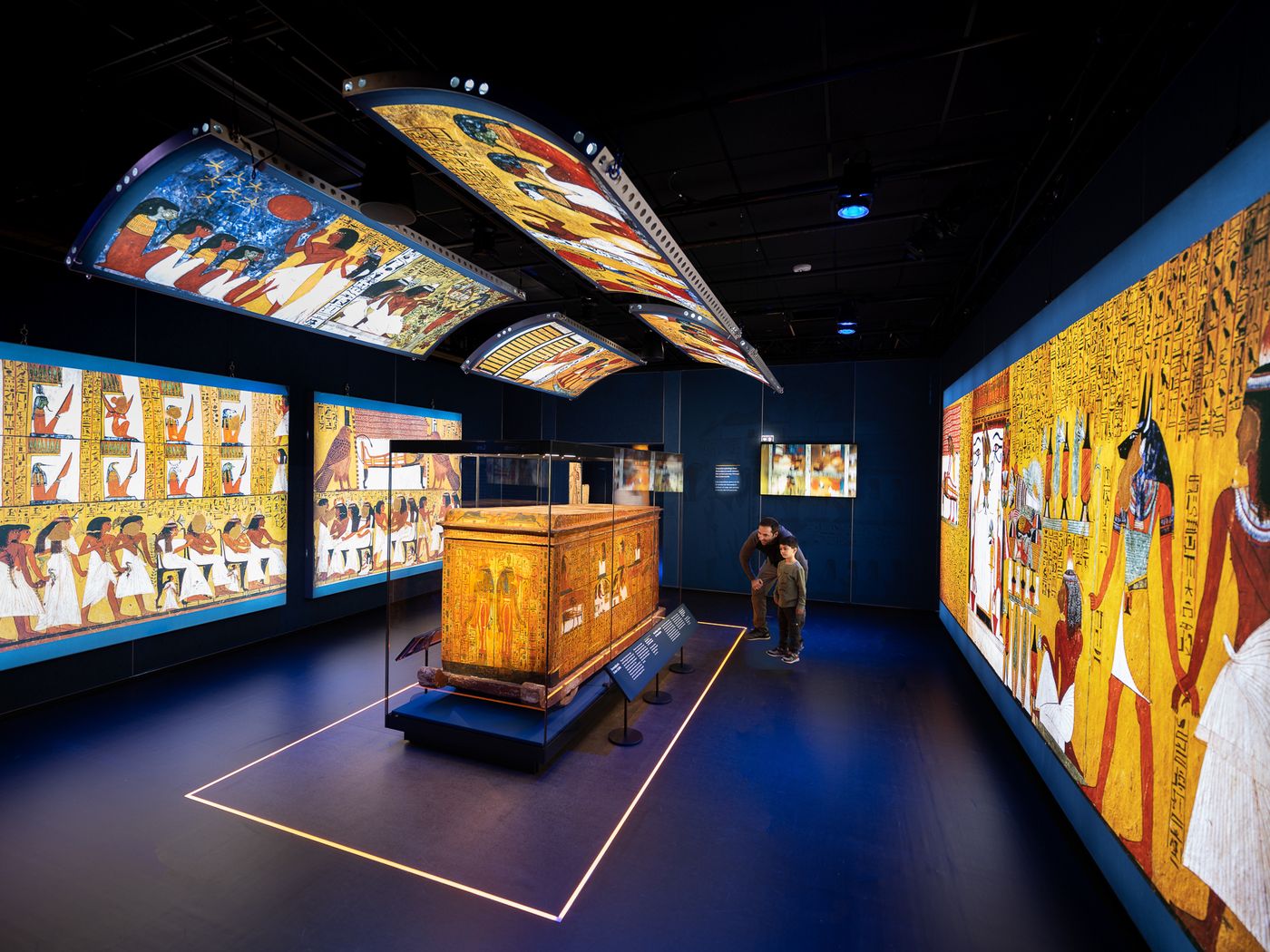 Ancient meets ultramodern in “Ramses the Great and the Gold of the Pharaohs,” now on view in Houston. Immerse Agency

Spears clash and arrows whiz through the air, their ricochets pulsing through the speakers in a dark room. Lions leaping mid-attack flash before transfixed museumgoers. Then the images change—a carved relief, a set of captives, a bombardment of troops. Suddenly, all three screens, including the large map stretched across a tilting triangular platform, fill with figures and enemy chariots swarming in time with the booming narration.

This dynamic recreation of the 1275 B.C.E. Battle of Kadesh, Ramses II’s greatest military achievement, is a feat of technology, its layered display creating an immersive experience without the use of 3-D glasses. The CGI spectacle marks one of several areas where ancient meets ultramodern in “Ramses the Great and the Gold of the Pharaohs,” an internationally touring exhibition that made its world premiere at the Houston Museum of Natural Science (HMNS) in November. The show’s embrace of new tools—a trend that is becoming more and more prevalent in traveling exhibitions—is all in the name of giving visitors a richer Egyptology experience.

“Technology can make the exhibit and the objects a thrill, an adventure, a mystery … that takes you 3,000 years back to the time of the pharaohs,” says the exhibition’s curator, famed Egyptian archaeologist Zahi Hawass.

Regarded by many as one of Egypt’s most powerful pharaohs, Ramses II, the third king of Egypt’s 19th Dynasty (roughly 1292 to 1190 B.C.E.), was also the country’s most recognizable ruler for centuries. He inspired English poet Percy Bysshe Shelley and was portrayed iconically by actor Yul Brynner in the 1956 film The Ten Commandments. His incredibly long reign spanned 67 years, from 1279 to 1213 B.C.E., according to Hawass, who previously scanned the pharaoh’s mummy. (Other sources place Ramses’ reign at 66 years.)

“We know things that Ramses left as official records of his reign, but then we have this much, much larger body of material of people who worked for the administration,” says Emily Teeter, an Egyptologist and associate of the Oriental Institute of the University of Chicago. “We know about the men who were building the royal tombs. We know about the priests, about the craftsmen. It was this enormous bureaucracy.”

The son of Seti I, Ramses earned the rank of army captain at age 10 and ascended to the throne as prince regent at age 14. Almost immediately, he found himself facing the Hittite army (of what is now modern Turkey) in the Battle of Kadesh. How much of Ramses’ battle heroics and ensuing victory was embellished by the pharaoh is still debated today, but scholars agree that his peace treaty with the Hittites in 1259 B.C.E. was the earliest known.

In addition to military conquests, Ramses’ accomplishments include one of the most expansive building campaigns in ancient Egyptian history, made possible partly by the economic wealth accumulated during his reign, says Teeter. “He has a lot of buildings all over Egypt: temples, tombs, statues, obelisks,” adds Mostafa Waziri, secretary-general of the Supreme Council of Antiquities, which consulted in the creation of the Ramses touring exhibition.

Pillars of Ramses’ reign include the rock-cut Abu Simbel temples in Nubia, which honored the sun gods and memorialized his beloved queen Nefertari after her untimely death; Nefertari’s highly decorated tomb in the Valley of the Queens; and the pharaoh’s own funerary temple, Ramesseum. As Egyptologists have recently acknowledged, Ramses also usurped many existing monuments—another point of note in the exhibition. Some scholars, including Teeter, say these seizures were meant to add weight to the creations rather than delegitimize the previous builders’ work.

“He remains this byword word for pharaonic bigness even to this day,” says Tom Hardwick, consulting curator for HMNS’ Hall of Ancient Egypt.

While plenty of the 181 artifacts on loan from the Egyptian government have connections to the great pharaoh, others—including intricate jewelry dated to the Middle Kingdom (1980 to 1630 B.C.E.) and a recently discovered trove of mummified animals found at the Saqqara necropolis, near modern-day Cairo—highlight the breadth of Egyptian culture beyond Ramses’ shadow. Some of the pieces appeared in a global 1980s Ramses tour prompted by the royal mummy’s examination in Paris the previous decade, says Waziri, but other artifacts hadn’t left the country prior to this newest exhibition. (“Ramses” is set to travel to nine other cities before it wraps its world tour in 2025. Dates and locations are still to be announced.)

The show’s organizers, HMNS and World Heritage Exhibitions (WHE), weave a multifaceted narrative. An introductory video relays basic information about Ramses. Then a doorway opens, offering visitors a glimpse of the first artifact on display: a 7.5-foot-tall, red granite statue of the pharaoh’s head that stands at the back of a corridor adorned with panoramic night shots of the Nile River. The exhibition unfolds similarly across its 12 rooms, which detail different aspects of Ramses’ life, including his roles as a builder, religious leader and warrior. Objects are placed alongside interactive elements, including video timelines and scale models.

Treasures like Ramses’ gold ring and painted reliefs of his conquests speak directly to his rule. Artifacts dated to before or after the pharaoh’s reign—including the inner coffin lid of 21st-dynasty high priest Pinedjem I, which was later stripped of its gilding, possibly by grave robbers, possibly by official decree—provide further context on ancient Egyptian life. (Ramses’ tomb was similarly ransacked, with his bones found in a wooden coffin plundered of its gold adornments.)

The show mostly uses video sequences that provide additional context: for instance, highlighting and translating the hieroglyphics on an obelisk, offering 360-degree views of a digitized artifact next to the actual static object, and arranging statue fragments to present viewers with a sense of how the artwork might have once looked.

Of course, video isn’t always as simple as it appears. The Ramses exhibition’s Battle of Kadesh sequence, which took more than six months to create, utilizes everything from projection mapping and see-through LCD monitors to 3-D assets, according to WHE president Anthony Tann. Drone footage of Ramesseum and Abu Simbel use a kind of CGI rendering to reconstruct how the feats of architecture might have appeared in their original splendor. Bright coats of ruby, ocher, emerald and turquoise paint highlight the chiseled images bedecking the temples’ walls, providing a striking juxtaposition to the faded hieroglyphics of today.

“Watching an archaeological site transform into what it was in the past is very engaging, and it really sparks people's imagination,” says Tann. “So, as they walk through the exhibit and they look at other artifacts, it engages their imagination to think, ‘Well, what did that look like?’”

The museum also leveraged new technology in its recent renovation of its Hall of Ancient Egypt: A projected CT scan reveals surprises hidden beneath a mummy’s wrappings, while a video screen shows millennia of deterioration at Abu Simnel compressed into just three minutes. Before viewers’ eyes, one of the grand statues in the temple’s facade crumbles and collapses; paint fades until only sandstone remains.

“Educators and researchers know different people learn in different ways,” says HMNS president and CEO Joel Bartsch, who was involved in both the touring exhibition and the local remodel. “So, I’m unapologetically happy to show the animations, the videos … as long as the foundation of [the visitor] experience is grounded in the actual objects.”

Set just outside the main exhibition for an additional cost of $22, visitors can take a virtual reality tour of Abu Simbel and the Tomb of Nefertari, led by the spirit of the pharaoh’s beloved queen herself. Part educational tool and part thrill ride, with a dash of narrative flair and the aroma of incense, the immersive experience acts like “a theme park ride inside an exhibition,” says Tann.

His team created the tour by stitching together thousands of photos in a 3-D video game engine—a process known as photogrammetry. Of course, bringing a Hollywood-style experience into the museum setting brings its own set of blockbuster-style flaws, from a convoluted plot that tries to please everyone to a seemingly whitewashed Nefertari (a longstanding issue in popular depictions of ancient Egypt).

The exhibition’s best moments, like a room devoted to the grave of royal tomb builder Sennedjem, incorporate the subtlest technology. “In good hands, [the technology isn’t] distracting from the objects, which are part of the museum’s mission,” says Hardwick. “They’re adding to them. It’s [context that] I, as someone who's spent far too long studying Egypt, take for granted.”

Hawass, who previously served as Egypt’s minister of state for antiquities, is currently leading what he describes as “the largest excavation to ever happen” inside Ramses’ tomb. The work is slow, as the great pharaoh’s tomb was built in an area with poor quality stone that has, in recent years, suffered from extreme flooding. But the team has already begun restoring decorative panels depicting scenes from the funerary Book of Gates, among other religious texts. And Hawass theorizes that a recently uncovered tunnel in the tomb may lead to the burials of several of Ramses’ sons.

These discoveries could be just the beginning. “What you can see above the ground represents maybe 40 percent of what the land of Egypt hides,” says Waziri. “We have a lot of discoveries in Egypt. It happens almost every month.”

“Ramses the Great and the Gold of the Pharaohs” is on view at the Houston Museum of Natural Science through May 23, 2022. The show will then travel to as-yet-undisclosed venues around the world.

Emma Schkloven is an award-winning features and culture writer. Her work has been picked up by the Washington Post and the AP. She lives in Texas with her queso-loving cat. www.emmawrites.us.