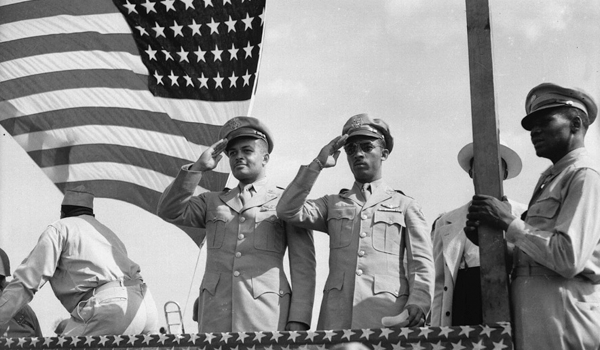 Teenie Harris knew everyone, and everyone knew him.

From the 1930s to the 1970s, Charles “Teenie” Harris worked as a photojournalist for the Pittsburgh Courier, one of the most influential black newspapers of the 20th century, capturing the everyday experience of African American life in the Steel City. His photographs depicted a black urban community that, despite the segregationist policies and racist attitudes of mid-century America, was innovative, thriving and proud. (His camera is in the collections of the Smithonian’s National Museum of African American History and Culture.)

During World War II, African Americans from Pittsburgh and all around the country fought and died abroad even as they were marginalized at home. Through his photography, Harris captured the realities—points of pride and points of sorrow—of a “separate but equal” service to one’s country, through his coverage of the Double Victory campaign, a nationwide effort launched by the Courier to enlist African Americans to fight for their country and their rights at home.

Harris also photographed over 1,500 soldiers in his studio, located on Centre Avenue in Pittsburgh’s Hill District; these portraits were a part of his contribution to the war effort. His images preserve the legacy of black patriotism during a time of visible discrimination.

The unique experiences of those black soldiers frame the conversation of this photo essay, which includes selections from the more than 80,000 photographs, negatives and film that comprise the Teenis Harris Archive at the Carnegie Museum of Art. Interspersed with these images are the lived experiences of Master Sergent Eugene Boyer, Sr., a veteran of World War II and Korea, and that of Staff Sargent Lance Woods, 60 years Boyer’s junior, a veteran of Iraq and Afghanistan. I spoke with them both in 2017.

This article was adapted from an essay written for Carnegie Museum of Art's award-winning online journal, Storyboard.

“The day that I was drafted in 1945, I go down there to the draft board, and you’re waiting to get assigned to a unit in the military, and they’ve got you all lined up, and they say, ‘This guy, you go to the Navy. This one to Marines. This one to the Army.’ I was literally praying, ‘Please don’t let me go to the Navy,’ because the only thing you could be in the Navy was a cook. And a server. For a guy who comes in the military expecting to defend his country, here you are, you’re serving dinner to these officers, and they weren’t always very nice. But the feeling of the Navy was, that was the only thing you were capable of doing.”

“In the Army, it’s all hurry up and wait. You know, so everything’s rushing a million miles an hour and then you sit down for six months, six weeks, you know, six days. Nothing is immediate, I feel like. Until it is.” -Staff Sergeant Lance Woods, U.S. Army

“Hurry up and wait. You sat on your duffle bag, and you waited for wherever they were sending you. You were always moving, after a year or so in one spot, you were always being transferred someplace else…. They’d send you there and you’d do everything that had to be done, and you were there maybe six months, a year, and then you were off to someplace else.” -Master Sergeant Eugene Boyer Jr., U.S. Army

“I got on a bus one day. I was probably 16 or 17, and the war was going on. There was a black pilot, he was a lieutenant, on the bus, and he had dark glasses on. I found out he had gotten fragments in his eyes in an air[strike] and his vision was impaired…. For me, that was the greatest thing that could’ve happened. I really saw a black fighter pilot, so you know now, it’s possible. That was a great feeling.” -Master Sergeant Eugene Boyer Jr., U.S. Army