“A sovereign should not be with the army unless he is a general!” said Napoleon, evidently uttering these words as a direct challenge to the [Russian] Emperor. He knew how [Czar] Alexander [I] desired to be a military commander,” – Leo Tolstoy, War and Peace

Workers’ strikes and bread riots raged in the Russian Empire’s capital city of Saint Petersburg. Nicholas II, who had been visiting military headquarters in Mogilev, more than 400 miles away, began a journey home on March 13 to suppress the uprising. Just two days later, before he could even reach the capital, he abdicated the throne, leaving Russia without a sovereign for the first time since 1613, when the Time of Troubles that preceded the accession of the founder of the Romanov dynasty, Michael.

By the time Nicholas left Mogliev, his authority had already collapsed as military regiments joined the demonstrations. That same day, the Duma, Russia’s representative assembly, responded to the unrest in Saint Petersburg with the announcement, “In view of the grave situation of internal disorder, caused by measures taken by the old government, the Interim Committee of Members of the State Duma has found itself obliged to take into its own hands the restoration of state and public order.” Two representatives of the Duma traveled more than 150 miles to meet Nicholas’ Imperial train in Pskov and delivered the announcement to him. Nicholas, for his part, had little political capital left to do anything but accept the Duma’s demands and abdicate his position.  He made changes to the draft document provided by the Duma representatives, however, abdicating on behalf of not only himself but also his 12-year-old haemophiliac son, Alexei. Nicholas feared that he would be separated from his ailing son and that the child would be used a figurehead to legitimize the new government. A new Russian government, which would become known as the Provisional Government, was taking shape.

Since succeeding to the throne in 1894, Nicholas had endured numerous crises and challenges to his authority, including defeat in the Russo-Japanese war of 1904 and the political upheaval that followed the Bloody Sunday massacre of 1905. Whenever Nicholas came into conflict with the Duma, which he would repeatedly, he would dismiss the representatives and call for new elections. This time, however, he was unable to dismiss the Duma. Without the support of the military, which was suffering massive battlefield losses to Germany as part of World War I, Nicholas’s power was limited. The military had supported the protestors in Saint Petersburg rather than suppressing them at the Czar’s command.

In Pskov, Nicholas received telegrams from his generals imploring him to abdicate for the sake of the war effort. Adjutant General Aleksei Brusilov, who led a successive offensive on the eastern front in 1916 messaged by telegraph, “At this moment the only way to save the situation and create the possibility to continuing to fight the external enemy…is to abdicate the throne” while Adjutant General Aleksei Evert telegraphed, “Counting on the army, as presently constituted to repress internal disorders is impossible…There are no means whatsoever of stopping a revolution in the capital cities.”

From Pskov, the czar issued a manifesto announcing his abdication, citing the interests of the military. It read, “At this moment, a moment so decisive for the existence of Russia, Our conscience bids Us to facilitate the closest union of Our subjects and the organization of all their forces for the speedy attainment of victory. For that reason We think it right – and the Imperial Duma shares our view – to abdicate the crown of the Russian state and resign the supreme power.”

In private, Nicholas was devastated that his generals no longer had confidence in him and recorded in his diary, “All around is betrayal, cowardice and deceit!”

The czar had another compelling reason to abdicate at the behest of the new Provisional government: the unrest in Saint Petersburg threatened the safety of his wife, Alexandra, and their five children who were living at the Alexander Palace, an Imperial residence just outside the city. That same fateful March 13, the Chairman of the Duma advised the Imperial family to flee the palace as quickly as possible, but Alexandra refused because her children had the measles with complications that could worsen during travel. The electricity and water stopped functioning at the palace amidst the unrest. Alexandra wrote to Nicholas on March 15, “The children lie quiet in the dark…the lift does not work, a pipe burst – Olga [age twenty one] 37.7, Tatiana [age nineteen] 38.9 and ear begins to ache – Anastasia [aged fifteen] 37.2 (because of the medicine they gave her for her head) Baby [Alexei] still sleeping.”

Alexandra and her one healthy daughter, 17-year-old Maria, visited the palace garrison in attempt to ensure they still had the support of the troops stationed there. Despite the Czarina’s efforts, the troops deserted soon afterward, leaving the palace vulnerable to being sacked by unruly protestors. Maria also came down with the measles, which developed into life-threatening, double-lung pneumonia, ensuring that the family had no intention of leaving their home. Rumors of an armed mob, determined to storm the palace, circulated among the household. Alexandra’s friend, Lili Dehn, who was staying at the palace during the upheaval, recalled in her memoirs. “The intermittent firing of guns was audible.” Nicholas saw a quick abdication as a way to return home as quickly as possible so a new government could command the support of the military and protect his family from violent revolutionaries.

For the councils of Workers’ and Soldiers’ deputies, or soviets, which emerged as key counterweights to a Duma more focused on Russia’s upper and middle classes,, Nicholas’s abdication was an opportunity to bring a permanent end to Czarist rule. , Nicholas inserted a provision into the abdication manifesto to leave the throne to his younger brother, Grand Duke Mikhail, but the soviets demanded, “No more Romanovs! We want a Republic!” Mikhail was technically Czar for a day before issuing his own abdication manifesto, stating that he would not assume the throne unless invited to do so by a representative assembly. The Romanov dynasty, which had ruled Russia for more than three centuries, was at an end.

After a brief return to Russian military headquarters in Mogliev to say a final farewell to the military, Nicholas joined his family at the Alexander Palace on March 22. Nicholas and Alexandra expected their time at the Alexander Palace to be temporary, hoping to spend the rest of the war with their royal relatives in the United Kingdom then retire to one of their estates in the Crimea. In Saint Petersburg, a wave of optimism greeted the abdication. Nicholas’s cousin Maria Pavlovna later recorded in her memoirs, “[Saint Petersburg] rejoiced. The statesmen of the former regime were under lock in state buildings or in prison; the newspapers sang laudatory hymns to the revolution and freedom and reviled the past with an astounding fury.”

Maria Pavlovna recalled that this revolutionary enthusiasm did not extend to the upkeep of the city, “The streets were carelessly cleaned. Crowds of idle, dissolute soldiers and sailors wandered continually about, while the well-dressed people who owned carriages and cars hid away in their homes. Police were not to be seen. Things ran themselves, and very badly.” The old regime was gone and the new Provisional government now had the formidable tasks of restoring order and providing a reliable supply of food to the cities.

The same day Nicholas was reunited with his family, the United States became the first foreign government to recognize the Provisional Government. The American ambassador to Russia, David R. Francis, had just been appointed by President Woodrow Wilson in 1916 and did not speak any Russian, but he saw the Czar’s abdication as a chance for the United States, another country created through revolution, to become the most important ally of the new government and receive more favorable trade contracts. Russia’s transformation from an autocracy to a republic also had the potential to increase popular support in the United States for joining the First World War on the side of the allied powers. Francis telegraphed Secretary of State Robert Lansing, “The revolution is the practical realization of that principle of government which we have championed and advocated, I mean government by the consent of the governed.” Two days later, Russia’s First World War allies, Great Britain, France and Italy also acknowledged the Provisional Government.

Hundreds of European and North American journalists, diplomats, merchants and medical staff became stranded in Saint Petersburg by the political upheaval and German U-boat blockade in the Baltic Sea. To them, the abdication of Nicholas II seemed sudden and unnecessary. As historian Helen Rappaport explains in her recent book about foreign observers in Saint Petersburg in 1917, Caught in the Revolution, the expatriates compared the Russian autocracy to their own political traditions and speculated about how events could have unfolded differently.

American photojournalist Donald Thompson thought that if Nicholas had returned to Saint Petersburg sooner, been driven down the main thoroughfare, “and stood up in the back of his automobile and talked, as Teddy Roosevelt would have done, he would still be Czar of Russia.”

The centennial of the Russian Revolution has brought great new scholarship to what we know about the events of 1917, Rappaport’s book included. Historian Robert Service explains in his latest book, The Last of the Tsars: Nicholas II and the Russian Revolution, that Nicholas never expressed personal regret for his loss of power, focusing instead on the hope that the new government would lead Russia to victory in the war.

Nicholas had already lost his freedom as well as his throne. Pierre Gilliard, the Swiss-born French tutor to the Imperial children recalled in his memoirs that the day before Nicholas’s return, Alexandra “summoned me and told me that General Kornilov had been sent by the Provisional Government to inform her that the Czar and herself were under arrest and that those who did not wish to be kept in close confinement must leave the palace before four o’clock.” The arrest was ostensibly for the protection of the Imperial couple from the unrest in Saint Petersburg. Their children and dozens of members of their household decided to remain with them under guard at the palace. Gilliard observed that Nicholas “accepted all these restraints with extraordinary serenity,” a view shared by other members of his household and his guards. He spent time with his family, went for walks in the heavily guarded palace park and caught up on reading, completing Tolstoy’s War and Peace for the first time in the months following his abdication.

The fall of the Romanov dynasty in March 1917 did not spark violence or a counterrevolution – that would come a few months later when the Bolsheviks seized power in November 1917. Instead, the mood in Saint Petersburg was optimistic, as the fall of Czarism seemed to be a golden opportunity for Russia to remake itself into a more egalitarian society that addressed the concerns of peasants and workers as well as the educated middle class. The new government, however, would face two key obstacles to maintaining power: the ongoing problems maintaining Russia’s participation in the war and the long-awaited return from exile of Vladimir Lenin who promised peace, land and bread.

Next: The Provisional Government and the return of Lenin The Last of the Tsars: Nicholas II and the Russia Revolution 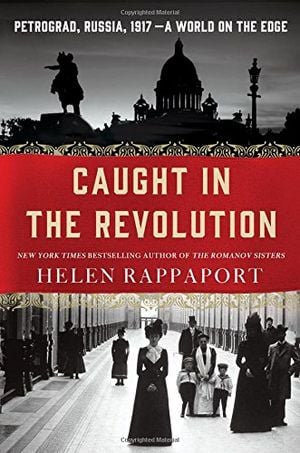 Caught in the Revolution: Petrograd, Russia, 1917 - A World on the Edge

Dr. Carolyn Harris teaches history at the University of Toronto, School of Continuing Studies and writes about history and royalty at Royalhistorian.com.