As the communications intern for the Movement of Life Initiative, I’ve had the pleasure of doing a variety of fun projects, but my favorite was accompanying our marine team this winter to Fort Pierce, Florida, to continue their work with Harbor Branch Oceanographic Institute at Florida Atlantic University. Our mission was to tag as many bull sharks and cownose rays that we could with aTeacoustic transmitters, allowing us to collect location data and determine the movement patterns of these two species.

When I arrived in Florida on January 14, I first caught up with Chuck Bangley, a postdoctoral fellow at the Smithsonian Environmental Research Center (SERC), and fellow SERC intern Michelle Edwards. They had been there since the previous Wednesday, and already had managed to tag four cownose rays and two bull sharks. Matt Ogburn (our fearless leader and principal investigator of SERC’s Fish & Invertebrate Ecology Lab) and Jay Fleming (the professional photographer documenting our expedition) joined the team on Monday night.

My favorite day of the week was undoubtedly Wednesday. We met at the boat at 6 a.m. to load up and trailer down to the lower St. Lucie River, where we’d try our luck catching our target species. The team was dragging a little—we’d had a long field day on Tuesday without too much excitement (only one small bull shark), and the morning temperatures were a little chillier than expected. But as we traveled to our first sample site and the sun began to peek out above the clouds, I began to get excited about the impending field day.

When we arrived, we began the process of cutting up bait (usually mackerel and mullet) and organizing the boat to deploy the first longline. A longline is a long rope attached to two anchors, where we can clip on 50 baited hooks. Christian Jones, a visiting scientist from NOAA Fisheries, took the lead on setting the line, methodically clipping the hooks full of bait onto the anchored rope as it dragged from the boat.

After 30 minutes had passed, Christian hooked the float and began pulling in our catch. I was in charge of taking the leaders from the line and discarding the unused bait or handing off whatever was on the end to Michelle. She was in charge of measuring and processing the catch and reading the data out to Mike McCallister, the research coordinator for the Fisheries Ecology and Conservation Lab at Florida Atlantic University and captain of the boat that day. Within the first five leaders, we had caught bull sharks and catfish (not our target, but the individuals still need to be measured and weighed for the sake of the study).

To process the fish in the boat quickly, we tied off the longline to the boat and began tagging the two sharks we had in the tank on board. One shark was a little over two and a half feet (0.8 meters), the same size that we had been catching previously, while the other was nearly 5 feet (1.5 meters). I was able to tag both sharks’ dorsal fins and assist in measuring and weighing both. It may seem a little unnerving to work with bull sharks, typically revered as one of the most aggressive shark species, and before the trip I wondered what it would be like to work with this species. I found that once you get into the rhythm of prepping the shark for surgery and collecting data, you quickly forget about their supposed “aggression” and instead focus on how to tag the shark as quickly and efficiently as possible to lessen its time out of the water.

Chuck was in charge of implanting the acoustic transmitters in the body cavity of the sharks. We put the sharks in a state of tonic immobility by turning them over, which has the same effect as anesthesia, but requires less time for the sharks to recover. The surgeries are quick, and afterwards the sharks are seemingly unfazed by their new accessory. Once released, each shark’s acoustic tag emits a unique signature that can be picked up by arrays of receivers along the East Coast of the United States as the shark journeys through its seasonal migrations. The receivers can then download the shark’s location and send that info to the scientists who tagged the shark!

The rest of the day wasn’t nearly as exciting as the first longline sample, where we ended up catching five sharks. We only tagged three of them to speed the process of taking them off the longline and setting them free—when we start pulling up the longline we don’t have any idea how many sharks are hooked, so speed is key. Unfortunately we didn’t catch any more for the rest of the day, but overall it was great to be out on the water working with these incredible creatures and getting to know my fellow scientists better. I’ve learned in my first years of conducting scientific studies that it’s not just about what you study, but who you study with that really makes the difference in what you get out of your science. Being in an environment that is quick to encourage and applaud, yet doesn’t hesitate to correct in a supportive way, is one of the best ways to experience research in the field. 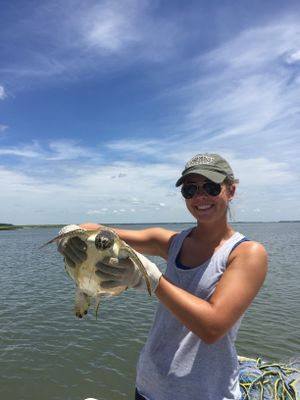 Claire Mueller worked as an intern with the Smithsonian Conservation Biology Institute from July 2017 to May 2018, as part of the Smithsonian’s Movement of Life Initiative. During her internship, she joined marine ecologists of the Smithsonian Environmental Research Center and created videos of their work tagging sharks and cownose rays. She graduated from Erskine College in 2016 with a B.S. in Biology, and studied with the Smithsonian-Mason School of Conservation during her fall 2014 semester. Claire now works as an environmental educator in Hunting Island, South Carolina. (Photo courtesy of Claire Mueller)