The Smithsonian’s National Portrait Gallery announces a new commission by New York City-based artist Maren Hassinger to premiere in the museum’s Great Hall June 25 at 2 p.m. Rescheduled from the summer of 2020 due to the global pandemic, the in-person performance is the latest iteration of the museum’s “IDENTIFY” series dedicated to performance art. “Birthright” (2022) explores the complexity of individual family histories through collective ritual. This live performance is based on the artist’s 2005 video of the same name, which documents the artist’s encounter with her uncle in an exploration of the paternal branch of her family tree.

“We are delighted to at long last premiere this new work by Maren Hassinger at the National Portrait Gallery,” said Charlotte Ickes, curator of time-based media art and special projects.

Hassinger’s performance offers visitors a participatory, hands-on experience. After screening her 12-minute video artwork “Birthright,” Hassinger will teach visitors the meditative ritual of twisting pieces of newspaper that she performs throughout the video. As visitors manipulate the newspaper, they are invited to share their own family stories. An American Sign Language interpreter will be present.

Hassinger’s “IDENTIFY” commission is the culmination of a trio of events from fall 2021 to summer 2022 celebrating the artist’s first public projects in Washington, D.C. In fall 2021, the Portrait Gallery and the Smithsonian American Women’s History Initiative hosted a virtual screening of Hassinger’s video “Birthright” (2005), which was later acquired for the Portrait Gallery’s collection. Following the screening, Hassinger premiered the site-specific sculpture entitled “Monument,” which she created outdoors in collaboration with volunteers in Washington’s Dupont Circle neighborhood. That project was part of “Monument and Marker,” presented by the Golden Triangle Business Improvement District and the Smithsonian American Women’s History Initiative, “Because of Her Story.”

Born in 1947, Hassinger came of age as an artist in the avant-garde of Los Angeles in the 1970s. In addition to her solo practice, she participated in the loose artist collective Studio Z in Los Angeles, alongside notable peers including Senga Nengudi, Ulysses Jenkins and David Hammons, before relocating to New York in 1984. Her work spans sculpture, video, performance and public art. In the mid-1990s, Hassinger was the director emeritus of the Rinehart School of Sculpture at the Maryland Institute College of Art in Baltimore. Her work is held in the permanent collections of major institutions in Baltimore, Chicago, Dallas, Los Angeles, New York and Washington. 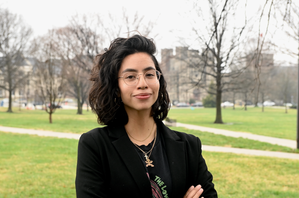