Movies and TV shows capitalize on our fear of parasites. This isn’t surprising when parasitic diseases are responsible for so much human suffering and death. Fortunately, most parasites don’t infect humans, though they can have some creepy and complex relationships with their animal hosts.

As you plan your next parasite-themed movie night, consider some of these classics and discover what makes real-life parasites so cool.

We can’t have a list of famous parasites without the “Alien” franchise. So much has been written about the Xenomorph life cycle and the infamous scene of the young “Chestburster” emerging from crewman Kane’s body, ultimately killing him. This is the real-life behavior of parasitoids, a subset of parasites that eventually kill their host. One example are ichneumon wasp larvae that the adult lays inside a caterpillar. The larvae kill their hosts by consuming them from the inside and bursting through the body wall to go on its merry way.

As grotesque as this destructive parasite behavior is, it’s actually uncommon among parasites. In fact, most parasites do not kill their hosts. Parasite-host relationships develop over thousands or millions of years and are finely tuned for the parasite to survive and reproduce.

Think about it: parasites, especially internal parasites like tapeworms that live in an animal’s intestine, are dependent on their hosts for protection, nutrition and reproduction. If the host dies, the tapeworm dies too. It cannot leave to find a new host, so killing its current host would not be a successful strategy. Parasites that only cause illness or don’t cause symptoms at all will reproduce more and their offspring will also wreak less havoc on their hosts’ bodies.

Would we notice if politicians were infected with mind-controlling extraterrestrial insects? Hopefully the answer is yes, but in the TV show “Braindead,” it wasn’t so obvious. Arriving with the bloom of Washington, D.C.’s famous cherry trees, parasitic insects enter through their host’s ear. In this case, politicians were infected and compelled to do the parasites’ bidding by trying to push through zany legislation. Thankfully, the parasites were thwarted before they could invade Wall Street, the Silicon Valley and Hollywood where similar extreme behavior and political stunts could go unnoticed.

There are several real-world parasites that use mind control to manipulate their hosts into helping them survive and reproduce. Gordian worms, or Nematomorphs, are an intense example. These worms infect insects like praying mantises, crickets or grasshoppers when their eggs are consumed along with the plants they’re laid on. The insect host then carries the developing worm in its body cavity. When the worms transform into adults, they grow long and thin, taking up most of the room inside the insect and pushing its internal organs aside.

When the worms are ready to emerge, the insect is compelled to throw itself into open water, risking drowning or being eaten by predators like fish. That is when the worm makes its move. It emerges from the cloaca, or back-end, of the insect and swims away to find more worms and mate. The insect is left ravaged and some die, although if the insect is able to avoid drowning and survives the worm’s forced exit, it can be reinfected for a repeat experience.

Tongue-biting isopods captivate in “The Bay” (2011)

With a blend of real-life organisms like Pfiesteria algal blooms and tongue-biting Cymothoa isopods in the Chesapeake Bay, the film “The Bay” has a double-dose of animals on the attack. In this movie, leaked video reveals a cover-up of a shore-side town on the Chesapeake Bay that is devastated by tongue-biting isopods that take on parasitoid behavior. Tongue-biting isopods are crustaceans that are closely related to pill bugs, or roly polies. They don’t infect humans. Instead, they live in the mouths of fish.

Tongue-biting isopods are just one example of animals we wouldn’t expect to be parasitic. Lots of animal groups have parasitic and free-living members, although the parasitic forms may look completely different from their relatives. Parasitism, which is a form of symbiosis, has evolved many separate times in several branches of the tree of life. Other examples of animals with surprising parasitic members, include barnacles, snails, flies, and wasps.

In “The Thing,” a parasitic alien reanimates after being frozen for more than 100,000 years and infects and assimilates into its host’s cells to imitate the host and ultimately spread. The team of Antarctic researchers must eliminate the parasite before it assimilates into all life on Earth.

It would be a long shot for an organism to wake up after being frozen since the time of the Neanderthals, but we can’t rule it out as impossible.

Tardigrades, or water bears, are microscopic animals known for surviving some of Earth’s most extreme environments. They have reanimated after being frozen for 30 years. Bdelloid rotifers – microscopic aquatic invertebrates — have come back after 24,000 years. Even some nematode worms can reanimate from incredibly cold temperatures as low as -196 degrees Celcius (-320 degrees Fahrenheit) if the cool-down and warm-up is slow and steady enough.

Sorry, this film isn’t about parasitic frogs. Instead, it’s about a birthday bash in the Louisiana swamps that gets crashed by a whole ecosystem, including geckos, snakes, turtles and even leeches, with deadly consequences. In the film, poor daughter Iris didn’t actually die of leech bites even though she fell into a leech-infested pool, but they weakened her and drove her toward her demise.

Death by leeches is rare and usually driven by other factors, like if the person is taking blood-thinners and has hundreds of bites. Even then, it wouldn’t be certain death.

Leeches produce saliva with anticoagulants that enter the wound while they feed. This prevents the wound from clotting even after the leech has left. For most people, leech bites slowly bleed for a few minutes to possibly hours after the leech lets go, but it will stop on its own eventually.

It is much more common for a leech bite to become infected than for it to cause serious blood loss. This can happen when the leech is removed forcefully, like being burned or salted. When this happens, the leech regurgitates blood back into the wound to get away quicker. Bacteria from the leech’s digestive system enter the bite site, resulting in an infection.

The safest way to remove a leech is by using your fingernail to release the suckers at the ends of the leech, pull it off and toss it back in the water. Then, consider whether you want a photo to remember your harrowing encounter, or possibly just a band-aid.

Parasite don’t have to be scary

It may be hard for you to love parasites like I do, especially after watching their famous, fictional counterparts. But these organisms are incredible and fulfill crucial roles in ecosystems that others can’t.

They are indicators of ecological change that might go unnoticed until it is too big to ignore. Which parasites are found in ecosystems, how many parasites are in those ecosystems and what they infect are all clues about how small changes in the environment can have big consequences in the future.

Hopefully you come away from this a little less scared and a more curious about these cool creatures.

Related Stories:
Why We Need to Save the Parasites
This Smithsonian Scientist is on a Mission to Make Leeches Less Scary 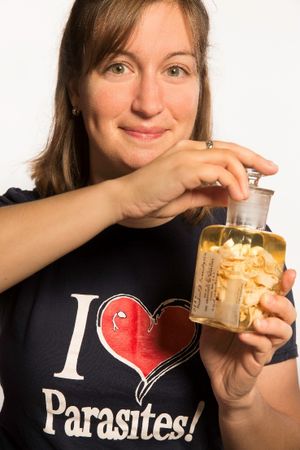 Anna Phillips is a research zoologist and curator whose research focuses on the systematics, evolution and host-parasite associations, mostly leeches and tapeworms. Her work uses morphological and molecular data to describe new species and determine the evolutionary relationships of these groups of worms, but this is not possible without fieldwork to collect specimens. Anna has conducted fieldwork on 6 of the 7 continents to collect parasitic worms in faraway places, such as Rwanda and Brazil, and some not so far away, like South Carolina, West Virginia and Arkansas. She is the curator of the U.S. National Parasite Collection.