When eight inches below the ground warms to 64 degrees, the invasion of the Washington metropolitan region will begin. Countless young cicadas will erupt from the soil, molting into adults who will then buzz nonstop at a decibel level close to the noise of a loud rock concert or a jet engine.

“Probably somewhere in the vicinity of a trillion cicadas will be out. It will be hard to walk outside without stepping on them,” said Floyd Shockley, the collections manager for the Department of Entomology at the Smithsonian’s National Museum of Natural History. “They will be singing all day from approximately 10am to 5pm, every single day. It will be a constant buzz for three long weeks.”

It’s been 17 years since the cicadas of Brood X last appeared. But although the stories from 2004 may vary from this year’s cicada tales, some things will remain the same.

This time — just like last time and countless times before — entomologists from the Natural History Museum will be on hand to collect cicada specimens from Brood X for use as vouchers, or samples that represent a species in a particular moment. These lucky few will head to the museum’s cicada collection, which has specimens from nearly every brood and every cyclical emergence across the Eastern United States since the 1880s.

“We’ve had cicadas in the collection from the very beginning when it first came to the Smithsonian and we have maintained them ever since,” said Shockley. “Every time a brood comes out, we collect a few vouchers.” 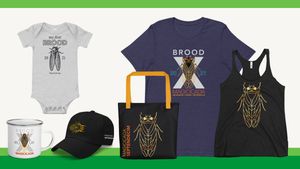 Nearly ONE TRILLION cicadas are expected to emerge across 15 states as a part of Brood X.They'll be hard to miss - covering trees, houses, and sidewalks and buzzing in unison for about six weeks

Even when cicadas aren’t buzzing audibly in the background, the insects are still around. The larger part of their life cycle is spent as nymphs, or immature cicadas, feeding off tree roots’ sap under the ground. Once matured, the adults then burst forth for several frenzied weeks of mating.

“The cicadas we’re familiar with, the adults, aren’t around for very long. They only live 4-6 weeks,” said Shockley. “The nymphs live their entire lives underground and only emerge as adults to find mates and die.”

Periodical cicadas belong to “Broods,” which are groups that are generally separated geographically. In the 1800s, scientists hypothesized there were 30 Broods, but only 17 have ever been documented. Brood X actually includes three different species. In the Washington metropolitan area, the dominant species will be Magicicada septendecim.

Dating (and mating) in the District

This cicada year, Brood X will spread its wings, covering the region with lovesick insects.

“It’s going to be pretty intense. You’ll really see them pick up in residential areas where people like to have trees,” said Shockley. “It’s going to be a population explosion even just a few blocks away from downtown.”

But periodical cicadas are not the only insects that have mass mating events. Many species use this evolutionary strategy to ensure their survival.

By emerging in one giant swarm, the periodical cicadas ensure that enough of their offspring will survive for the next cycle. For locals, that will be in 2038. When that comes, scientists will take voucher specimens again for the entomology collection at the National Museum of Natural History.

A place above ground to call home

For over 140 years, the museum’s National Entomology Collection has stored voucher specimens from most of the nation’s cicada broods and their cycles.

This year, Shockley and his colleagues also plan to put some of the vouchers from brood X into the museum’s Biorepository, which houses cryogenically preserved specimens for future analysis. There, vouchers can be accessed by entomologists around the world who may want to use tissue samples for their own research.

All of the collection’s cicada vouchers act as snapshots in time for each brood’s locality and distribution across the Eastern US and could one day be used to study how broods change over time in response to environmental change and other factors.

“There are over 140 years' worth of broods in the collection. Someone could come along and see how they change in terms of morphology, distribution and so forth," said Shockley. "These are all types of research that can come out of vouchers, which is why we want to make sure we capture them every time that it happens.”

Abigail Eisenstadt is a Communications Assistant at the Smithsonian's National Museum of Natural History. She brings science to the public via the museum's Office of Communications and Public Affairs, where she tracks media coverage, coordinates filming activities and writes for the museum's blog, Smithsonian Voices. Abigail received her master's in science journalism from Boston University. In her free time, she is either outdoors or in the kitchen.