From our canoe I could see something moving under the surface of the murky water —something big. It was the fall of 2017, and I was leading an expedition to discover and study the mysterious fishes deep in the Brazilian Amazon.

We were paddling down the Javari River, a 736-mile tributary of the Amazon River that is surrounded by the highest concentration of uncontacted tribes in the world.

To reach the Javari we flew more than 2,000 miles from Sao Paulo, Brazil and travelled another 12 hours by boat. When we finally reached the Javari River, the water level was low after a recent drought. Our boat ran aground several times, potentially stranding us far from help.

Now deep in the jungle, tales of violent attacks on outsiders by Javari tribes like the Korubo or “clubber Indians” haunted our team. But the urgency of our mission outweighed the anxiety and risk. New hydroelectric dams and increased mining activity posed immediate threats to the new species we hoped to document.

We paddled the canoe closer, and a huge “S” appeared beneath the surface. Was it an anaconda?

The Amazon and its tributaries contain over 3,000 species of freshwater fishes—roughly three times more than the entirety of North America. The fish living in hard to reach areas like the Javari are not well studied and some may be completely unknown.

Our goal was to add Amazonian fishes to a digital genetic library called MiFish, that would enable scientists to determine a river’s inhabitants from just a scoop of water. This work has the potential to make scientific surveys faster and cheaper at a time when funding is tight and many species are running out of time.

After a few paddle strokes, fins and a massive head revealed the identity of the serpentine giant: it was the biggest electric eel (Electrophorus electricus) I had ever seen in 20 years studying freshwater fishes.

I was ecstatic to find such a large specimen swimming in the main river. Electric eels are usually restricted to small tributaries and pools buried deep in the forest. The electric fishes of South America (Gymnotiformes) are a specialty of mine—I have discovered more than 80 new species of electric fish.

All fish in this group, commonly known as knife fish, can produce electricity. But only the electric eel uses it as a weapon. A 7-foot monster like this could produce a shock of up to 650 volts, more than five times the electricity of a standard wall socket, enough to stun an adult human. Some of my research on this unique group of fishes can be seen in a special exhibit at the National Zoo.

Apart from providing essential genetic data for the MiFish library, such a huge fish could teach us how long electric eels live. The layers of a small bone, called an otolith, inside each fish’s ear can be counted like the rings of a tree to determine its age. But for the fish to give up its secrets, we would have to get it in the canoe.

We encountered the giant electric eel in the final days of our 18 day journey along the Javari River. We collected more than 15,000 specimens representing more than 450 species. Approximately 45 of these species were previously unknown to science. We also collected over 700 tissue samples for DNA analysis.

We used tissue samples from identified species like this electric eel to create a genetic barcode for each species in the MiFish library. The library can then be used to decode what is called environmental DNA (eDNA). As fish go about their business in the river—getting eaten or losing scales—they inevitably leave a trail of their DNA floating behind them.

This library can turn the traces of DNA in a test-tube of river water into a list of the fish species that live there. With a genetic library to interpret them, surveys using eDNA can capture vast amounts of biological information quickly, cheaply, and accurately.

Back in the canoe, the electric eel was swimming in water too deep for us to jump in and ensnare it with a net. We followed the eel until we got close enough for one of our fishermen to spear it. For 20 minutes the eel thrashed to get free. Finally, we pulled it from the water with rubber gloves to shield ourselves from its electric shock.

We brought the behemoth back to our main vessel, the “Água Viva,” and preserved the fish in five sections using formaldehyde, and then transferred the pieces to a 55-gallon plastic drum filled with alcohol. These chemicals preserve the fish for future study, and ensure its body will further our understanding of its species.

Our expedition on the Javari was the first in a series trying to bridge the gap between traditional biological surveys and new, faster genetic approaches. Accelerating biodiversity screening in remote regions like the Javari is the only way for us to understand what it would mean to lose them.

Our next journey begins in March of 2019 in a faraway and largely unexplored portion of the Rio Negro between Brazil and Venezuela. 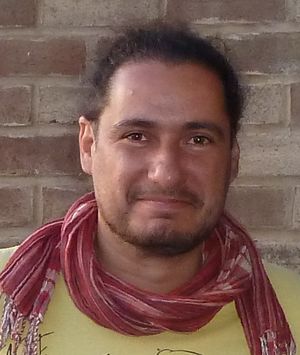 C. David de Santana is a Research Associate in the Division of Fishes at the Smithsonian’s National Museum of Natural History. His biodiversity research program focuses on describing and understanding freshwater fish biodiversity by working in museum collections, the laboratory of molecular biology, and doing fieldwork. Some of de Santana's research on electric fishes can be seen at the Amazonia house of the Smithsonian’s National Zoological Park. This material is based upon work supported by the Global Genome Initiative under Grant No. GGI-Peer-2017-149.