On four small islands in the Caribbean, St. Croix ground lizards rustle in the leaf litter, fighting and foraging. They're blissfully unaware that they are endangered and until recently one of the world's rarest lizards. St. Croix ground lizards lost the struggle against the voracious appetites of invasive small Indian mongooses and land conversion by 1970. Totally extinct from their namesake island, only 400 lizards remained on two offshore islands. New populations created by translocating individuals from those two islands in 1989 and in 2008 increased the populations in total to nearly 3000 lizards. The conservation translocations helped the species grow in numbers, but the genetic health of the species declined across those islands due to isolation. Now, scientists are working to save St. Croix ground lizards from extinction and bring them home to their namesake island.

As a researcher the Smithsonian’s National Museum of Natural History (NMNH), my science aims to expose new ways to understand species persistence. While I’m in the field, I collect abundance and physiological information from living animals. But, when I am in the museum, I gather morphological and genetic data from specimens that were collected before and after the small Indian mongooses were introduced to the Caribbean nearly 150 years ago. My preliminary findings indicate that some ground lizard species—but not all—adjust to predation morphologically by becoming longer and slenderer after mongooses establish. The sticking point? St. Croix ground lizards have not made such an adjustment.

Thus, a team of conservationists representing over twenty organizations have joined forces to help the lizard adjust to the fast-paced world. In June 2017, we made available more genetic variation by introducing new adults to the newest populations created in 1989 and 2008 on Ruth and Buck Islands.

We spent six days catching the tiny lizards, assessing their health, and collecting genomic samples for the NMNH’s Biorepository. We packed groups of lizards into sturdy containers and transported them by boat from the native cays to the island to where individuals were previously translocated and released them. Our hope is that we are proactively mitigating the adverse effects of island isolation and that, in the years to come, we will find the signal of the translocated individuals in the genomes of lizards of future generations.

Luckily, we finished our project before the hurricane season started. NOAA (National Oceanic and Atmospheric Administration) predicted in May that the 2017 hurricane season would be intense…and so it was. On 20 Sept. 2017, Hurricane Maria came within miles of a direct hit on the islands where the St. Croix ground lizards and some members of our team live. An out-pouring of humanitarian support allowed our friends, families and colleagues to begin the long process of rebuilding. But after the shock passed, we wondered about the lizards.

A month later, we returned to the islands to see how the lizards were doing.  Maria destroyed the trails on the islands so we navigated the island by satellite signal only. Fortunately, we found large adults of 2-3 years of age as well as new juveniles in each of the places that we had hoped. St. Croix ground lizards came out the other side of the hurricane intact! We don't mark individual lizards so we must wait patiently, for several years, to see if genetic signatures of the translocated lizards indicate that our 2017 reinforcements survived long enough to pass on genes—despite the natural disaster so soon after their translocation.

Scientists call hurricanes a stochastic threat—happening from time to time. They vary in intensity from island to island and in their effects from species to species. In contrast, persistent threats are always present—like the mongooses living on St. Croix for the past 150 years. While many species are resilient to catastrophic events in the Caribbean, repatriation is critical to protect the St. Croix ground lizard from the combination of persistent and stochastic threats. 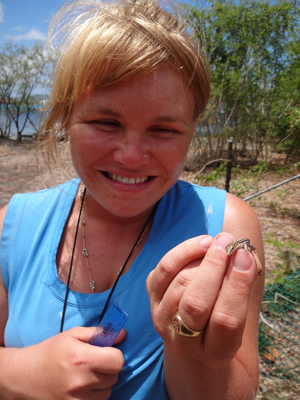 Nicole Frances Angeli is a research associate and former Predoctoral Fellow at the Smithsonian's National Museum of Natural History. She studies how species can survive in a changing world where threats still exist. Using museum specimens, natural history, and old maps to understand historic declines, her work is informing conservation actions for endangered and widespread species today. Her favorite field trip for the Smithsonian was to St. Thomas where the type specimen of the Puerto Rican ground lizard was collected by a pharmacist in 1862. When she's not in the collections, she is taking a long ocean swim!