Did you know that the Smithsonian’s National Museum of Natural History has over 33,000 egg clutches (groups of eggs laid at the same time) in its bird egg collection? That’s more than 109,000 individual egg specimens! It is a hidden gem that rivals the fanciest Easter basket imaginable. The eggs vary in size, shape, color, and pattern and reflect the diversity of life on this planet. So, how did the collection start? And why do we have so many bird eggs?

The Smithsonian played an important role in the development of oology (the collection and study of bird eggs) as a science in the United States and supported the first eggers. Now, the term “egger” might conjure up images of teens in the night throwing eggs at a house, but I assure you it is used to describe contributors to one of science’s unique resources, museum bird egg collections.

Formally known as oologists, eggers collected bird eggs and started their own private collections in what was originally a European pastime in the 1830s. This activity migrated to the States in the mid-1800s and collecting hit its heyday around the turn of the twentieth century.

As oology’s popularity increased in the early 1900s, two groups of eggers emerged: hobbyists and oologists. While hobbyists collected for just that reason, a hobby, oologists followed strict protocol for marking and documenting their eggs as scientific specimens and published their findings. They even set up a vast trading network in the new publication “The Oologist.”

In the end, Congress passed the Migratory Bird Treaty Act in 1918 which made it illegal for just anyone to collect bird eggs or keep them without a federal permit. So, most of the vast collections were deposited in museums like the Smithsonian’s National Museum of Natural History.

Even though egg collecting is not as prevalent as it once was, the importance of the collection has not diminished. The attention to detail and superb record keeping of the early eggers proved to be very useful to scientists. In particular, they were pivotal in banning the use of DDT (Dichlorodiphenyltrichloroethane) which bolstered bald eagle, peregrine falcon, and brown pelican populations, helped farmers understand lighting for the best egg development, and contributed to countless climate change studies.

Oologists’ records and NMNH’s bird egg collection have and continue to "egg on" groundbreaking scientific research.

I see and work with this legacy every day. And, now, you can experience it for yourself. A spectacular selection of our bird eggs is on view in Objects of Wonder through 2019. 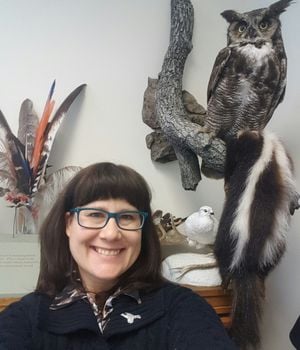 Christina Gebhard is a Museum Specialist in the Division of Birds at the National Museum of Natural History. She helps manage the third largest Ornithological research collections in the world. She began her collections management and specimen preparation career while still in college at the Burke Museum of Natural History and Culture, University of Washington. Her expedition experience has taken her to Africa, Asia, and Central and South America. She holds a BA in Zoology and a BFA in Metal Design from the University of Washington.