The fragile Japanese narrative handscroll Miraculous Interventions of Jizo Bosatsu (F1907.375a) dates to the thirteenth century and has one of the earliest depictions of the bodhisattva Jizo in Japanese art. Buddhist themes were popular in early Japanese narrative painting beginning in the late twelfth century. Among Japan’s most revered bodhisattva Jizo was worshiped as a protector of children, women, and those in distress. In this handscroll, which measures approximately forty-six feet in length, various miracles performed by the compassionate Jizo are interspersed with five sections of text that explain the surrounding scenes.

The scroll, last remounted over one hundred years ago, has deep creases, flaking pigments, and delaminating layers of support papers. These unstable conditions make conservation treatment and remounting necessary. Prior to beginning the extensive conservation treatment of this handscroll, which will take more than two years to complete, a scientific analysis project was launched to determine the pigments employed in both its creation in the thirteenth century and later restorations over intervening centuries. The scroll’s length required tools that could collect information from large areas. For this reason, conservation scientists at the Freer and Sackler turned to spectral imaging technologies.

X-ray fluorescence (XRF) imaging spectroscopy obtained elemental information from the inorganic materials present in the pigments as well as the scroll. XRF is routinely utilized in conservation labs to characterize objects, including metals, ceramics, and paintings, without touching them. Using such an instrument to scan the scroll was challenging due to the topography of the surface. Small areas at a time were analyzed to allow for physically close measurements. By examining the collected data we can map the relative amounts of elements common to mineral pigments, such as copper, lead, and mercury.

One examined section of the handscroll depicts a ceremonial dance performed at the Kasuga Shrine in Nara, Japan (left). The element map analysis confirmed the presence of gold in the dancer’s mask (middle). Mercury is in the red pigment of the dancer’s costume (right).

While information about the natural elements in a painting is useful, we need to know about the chemicals present to identify the pigments. Organic dyes, such as indigo, also would not be detected through XRF. For this reason, we established a technical collaboration with the Scientific Research Department at the National Gallery of Art to borrow its reflectance imaging spectroscopy (RIS) equipment. Postdoctoral fellow Francesca Gabrieli briefly joined us in our research to lead the image collection and data interpretation.

Reflectance imaging spectroscopy is similar to using a digital camera. Instead of collecting three bands of light (red, green, and blue), RIS captures hundreds of bands that provide chemical information based on the interactions of pigments with light. When viewing the collected data, scientists can enhance the contrast by selecting specific bands that highlight faint pigments.

Reflectance imaging adds information to the XRF data. While the gold reflectance signal is unique (middle), the elemental map confirms its identification. The mercury sulfide pigment vermilion has a distinct reflectance feature (right).

Through continued research we will explore which pigments were used in this thirteenth-century object and how they differ throughout the length of the scroll. In future studies we will examine the evidence and the extent of previous restoration work. Our findings will guide us in conservation treatment for years to come. 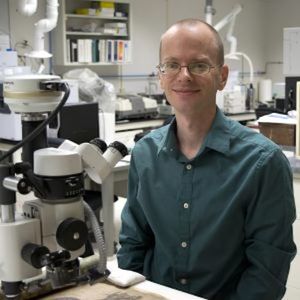 Matthew Clarke, Ph.D., is a conservation scientist in the Department of Conservation and Scientific Research at the Freer Gallery of Art and Arthur M. Sackler Gallery, the Smithsonian’s National Museum of Asian Art.