The cicada’s role in Chinese culture is a longstanding and fascinating one. Meanings associated with the insect range from simply indicating the onset of summer to more complex themes, such as rebirth and immortality. The cicada can even represent the pathos of nature, in which we are all prey in the end.

In general Chinese lore, cicadas are creatures of high status. They are considered pure because they subsist on dew and lofty because of their perch in high treetops. An ancient analogy in China suggests that a high-ranking official should resemble a cicada: residing high, eating a pure diet, and with sharp eyes.

Also in antiquity, the headgear of rulers and nobles incorporated a golden image of a cicada with prominent eyes. The emblem signaled refinement, modesty, and a full awareness of one’s surroundings.

Since ancient times, the cicada has been seen as a symbol of resurrection, an association that owes to its fascinating life cycle. Newly hatched insects drop from branches to burrow into the ground, where they nourish themselves on tree roots for as long as seventeen years before emerging into the sunlight. Then, they climb high into the trees, and their outer skin splits open to allow the full-grown insects to appear.

This process was seen as an analogy for the spirits of the dead rising on a path to eternal existence in a transcendent realm. In the Han dynasty, jade amulets shaped like cicadas were placed on the tongues of corpses, no doubt to symbolize a hope for rebirth and immortality.

The cicada is the most conspicuous summer insect and sometimes represents the season. Its desiccated image when the autumn chill sets in, however, stands for pathos in some Chinese works. Take for example, an anecdote from the Zhuangzi, a compilation of writings by Zhuangzi (late fourth century BCE) and others. While out in a chestnut grove aiming to shoot a jay, Zhuangzi was distracted by a cicada carelessly settling in the shade. A mantis devoured the insect before it was, in turn, caught by the jay. Unsettled by the natural cycle of one species preying on the next, Zhuangzi decided not to shoot the jay. The tale has been turned into a pithy saying about the circle of life: “As the mantis catches the cicada, the jay is just behind.” 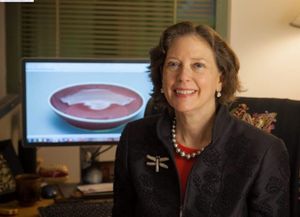 Jan Stuart is the Melvin R. Seiden Curator of Chinese Art at the Freer Gallery of Art and the Arthur M. Sackler Gallery, the Smithsonian's National Museum of Asian Art.