We’ll all miss him and his pencils. He got into the scrimmage himself, so engrossed that players would run right into him. He’d just get up and smile and go right back to work, apologizing for interrupting the play.
–Harry Stuhldreher, University of Wisconsin football coach, 1946.

In 1936 John Steuart Curry became the first artist-in-residence for the University of Wisconsin’s College of Agriculture. An article in Life magazine called it “one of the strangest jobs ever offered a U.S. artist,” jokingly describing Curry’s duties as “to mingle with the undergraduates, ramble over Wisconsin farmland for pictures and occasionally drop remarks about the Appreciation of Art to students." In keeping with the Wisconsin Idea—that the state university should serve all the state’s citizens—the position was actually intended primarily as a resource for rural Wisconsinites. The college’s forward-thinking Dean, Chris Christensen, felt strongly that educated, culturally sophisticated rural citizens were essential to both the economy and a healthy democracy.

But in truth, the university’s expectations for Curry were remarkably open-ended. Although the Department of Rural Sociology offered him a generous $4000 salary and a spacious studio, Curry did no formal teaching and had most of the day free for his own work. This surely rankled faculty over in the Department of Art, many of whom considered his realism conservative and his Midwestern subjects provincial. Curry’s wife Kathleen later recalled that very few art students sought him out during his afternoon open studio hours. Instead he interacted with students in the Farm Short Course, a fifteen-week winter program for young farmers, and mentored rural artists through noncredit workshops, critiques, and an annual juried show.

The artist chosen for this role couldn’t afford to be seen as an outsider. Curry, having been raised on a Kansas farm, understood and respected rural communities. Admiring healthy livestock or joining a hunting party was natural for him, and made it clear that despite his fame, Curry was a regular guy. As Christensen said, “We all like him—his stamina, his personality, his pictures … He makes sketches of the football players, and hangs around the stock farms talking to the boys about the beauty of a sow’s profile.”

When he first arrived in Madison, coverage in the local paper made a point of emphasizing that Curry was “not arty,” with “no pretensions about him.” It helped that he was a passionate sports fan who spent a surprising amount of time at boxing rings, on the football practice fields, and cheering on the games at Camp Randall Stadium. Curry had been a star half-back at Geneva College in Beaver Falls, PA back in 1918, and his reputation in Madison was boosted by portraits of local athletes like UW’s star player David Schreiner (An All American, 1941) and pro wrestler Jimmy Demetral. Curry also made a series of lithographs depicting UW football players in 1937, based on sketches done at games and the practice field.

After Curry’s death in 1946, an anonymous reporter from the Wisconsin State Journal described him this way:

He was the mild man in the velvet jacket with the pipe, and the softly curling tonsure; a painting-man. But he was also the man who watched in tense joy at every boxing match, sketching the gladiators as they fell and rose, the loyal Badger on every 50-yard-line and every practice field—and he could out-argue every Barbershop Quarterback in town.

Although Curry often did sketch on the scrimmage line, the photograph featured here was almost certainly staged. The College of Agriculture deployed good-humored press coverage to deflect criticism of its new artist-in-residence; there are quite a few photos of Curry sketching horses and cows while wearing a suit and tie, and others where he is conspicuously dressed in overalls or hunting caps. Together these images painted a picture of the artist as a humble man’s man, not at all ”arty” or elitist, with a self-deprecating sense of humor about his fame and position. 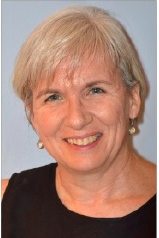 Jody Clowes is the director of the James Watrous Gallery in Madison, Wisconsin, a program of the Wisconsin Academy of Sciences, Arts & Letters.
Instagram