Fifty years ago—on July 20, 1969—the world held its collective breath as U.S. astronaut Neil Armstrong took "one giant leap" and landed safely on the Moon. That one unforgettable moment showed us that what we once thought impossible was now within our reach.

Though the "public face" of the U.S. space program in the 1960s was male, many women played essential roles in building the Apollo program and making the Moon landing a success. As we mark the 50th anniversary of Apollo 11, here are a few women whose stories deserve to be celebrated.

When the Apollo 11 spacecraft took off on July 16, 1969, return-to-Earth specialist Poppy Northcutt watched nervously. The NASA engineer—and the first woman to work in a technical role in Mission Control—had helped design and build the engine that would be used in the craft’s descent on the Moon. During the mission, an unexpected challenge arose when flight control could not figure out why the craft’s return trajectory map was incorrect. The team looked to Northcutt to recalculate the trajectory, ensuring the crew returned home safely.

“I thought it was important that people understand that women can do these jobs—going into science, going into technology, doing something that’s not stereotypical,” Northcutt says in a 2019 PBS documentary, Chasing the Moon.

Mathematician Katherine Johnson started working in NASA’s “colored computers” lab in 1953. As an African American woman working in a predominantly white, male environment, Johnson faced persistent discrimination in the workplace but her brilliance carried her forward—a story portrayed in the popular film, Hidden Figures. From the Mercury missions to the Moon landing, Johnson did the math that made space exploration possible. During the Apollo 11 mission, she calculated trajectories and executed backup navigational charts in preparation for possible failures. Johnson’s team checked and re-checked the math behind every part of the mission, from takeoff to splashdown.

On July 20, 1969, as the Apollo 11 lunar module approached the Moon’s surface, its computers began flashing error messages. For a moment, Mission Control faced a “go / no-go” decision, but with confidence in the software developed by computer scientist Margaret Hamilton and her team, they cleared the astronauts to proceed.

Hamilton, then the 32-year-old Director of the Software Engineering Division of the MIT Instrumentation Laboratory, developed the coding used in Apollo’s on-board flight software and lunar landing machinery. She insisted that the system be error-proof and added a program to recognize error messages and force the computer to prioritize the most important tasks. Thanks to Hamilton, the system performed as needed at a crucial moment, and the Apollo 11 crew landed on schedule.

“Because software was a mystery, a black box, upper management gave us total freedom and trust. We had to find a way and we did,” Hamilton said of her work on Apollo 11. “Looking back, we were the luckiest people in the world; there was no choice but to be pioneers."

In 1969, most Americans weren’t thinking about what the Apollo 11 astronauts would eat during their historic flight, but Rita Rapp made it her personal mission. As head of the Apollo Food System team, Rapp designed a nutrition regimen and food stowage system for the astronauts, focused on delivering the right mix of calories, vitamins, and nutrients to get the job done.

Rapp, who held a Master’s in anatomy from the St. Louis University Graduate School of Medicine, took pride in providing the Apollo crews with the flavors and comforts of home. Working with the astronauts, her team experimented with new recipes in the food lab. They eventually replaced the conventional “tubes and cubes” style of space food with everyday meals like grits, shrimp cocktail, beefsteak, cereal, fruits and vegetables, and the astronauts’ personal favorite—homemade sugar cookies.

At the company’s factory in Delaware, a talented group of women set to work constructing Apollo spacesuits out of nylon, latex, Teflon and Lycra—the same materials used to make Playtex bras. The seamstresses, including Hazel Fellows, pictured, sewed 21 layers of thin fabric together with a 1/64th-inch tolerance stitch to keep the astronauts comfortable and, more importantly, alive. The resulting state-of-the-art spacesuits withstood the lunar vacuum and extreme temperatures but were also soft, flexible and attractive. Redesigned versions of the original suit were eventually worn by all 12 Apollo astronauts who walked on the Moon.

Neil Armstrong’s spacesuit, recently conserved by the National Air and Space Museum, remains an iconic symbol of American achievement and a lasting testament to these women’s design ingenuity and skill.

To learn more about the “HerStory” behind the moon landing, take our Women of Apollo quiz.

Sign Up to Join the American Women's History Community
You'll get the latest news, updates and more delivered directly to your inbox.

The Smithsonian American Women's History Initiative is supported in part thanks to people like you. Make a gift now and help us amplify women's voices, reach the next generation, and empower women everywhere. 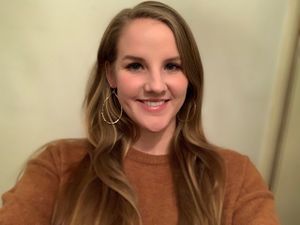 Maddi Hellmich is a Smithsonian Women’s History Initiative intern with the Smithsonian’s Office of Advancement and Office of Communications and External Affairs.