He’s a whistle-blower who carried an actual whistle, which he wore around his neck during his 12 years as a trainer of killer whales at SeaWorld theme parks. The whistle, intended to get the attention of the 8,000-pound animals swimming around in the tank, saved his life on occasion, but it easily could have cost him his life if a whale had grabbed it to pull him into the water. As a precaution, John Hargrove writes in a new book, Beneath the Surface, the lanyard had a breakaway ring—and thus served as a “kind of rosary, a subtle reminder of how suddenly the hour of death may come upon you when working with orcas.”

Hargrove was one of the first voices heard in Blackfish, the 2013 documentary that raised questions about SeaWorld’s practices; it was released three years after the death of a SeaWorld trainer named Dawn Brancheau, who was attacked by an orca during a performance. Hargrove’s book elaborates on some of the documentary’s claims but also testifies to the thrill of standing athwart four tons of muscle rushing through the water at 30 miles an hour. And, equally, the nearly mystical experience of bonding with an intelligence eerily similar to our own, yet ultimately unfathomable—and uncontrollable.

Hargrove, who quit SeaWorld in 2012, suffered numerous broken bones and nearly destroyed his sinuses. It was a risk he ran with his eyes open, and one that, in the end, he seems to feel was almost worth it. “I owe those whales,” he says in an interview. “They gave me so much in my life and my career.” But the whales’ physical and emotional well-being, he grew to believe, was incompatible with captivity. Confined to unnatural social groups for the convenience of their owners, bored and restless, forced to perform tricks for food that trainers withheld as punishment, they occasionally slipped, he writes, “into the dark side.”

SeaWorld won’t discuss Hargrove’s book before it appears, but vice president of communications Fred Jacobs writes in an email that “John Hargrove joined ranks with animal rights extremists after leaving SeaWorld and has eagerly embraced their habit of misleading the public to advance an agenda.” The company disputes most of the assertions in Blackfish, but it has outfitted some pools with fast-rising floors, so that a person who falls into the water with a whale can be quickly lifted to the surface. (After Brancheau’s death, the Occupational Safety and Health Administration prohibited trainers from performing in the water with orcas.) Trainers have begun carrying emergency compressed air. And the San Diego park plans to begin construction this year on a new orca habitat, called Blue World, that will more than double the swimming space.

Hargrove, living now in New York City, has adopted a pet of his own: Beowulf, a 98-pound pit bull-Dalmatian cross. She is, he says, as close as you can get to a killer whale in dog form. 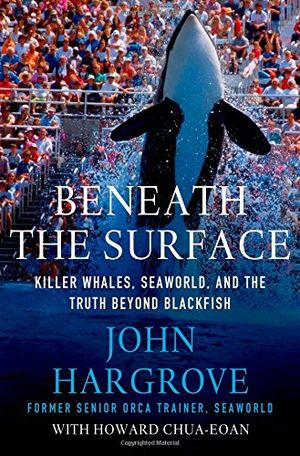 Beneath the Surface: Killer Whales, SeaWorld, and the Truth Beyond Blackfish Death at SeaWorld: Shamu and the Dark Side of Killer Whales in Captivity