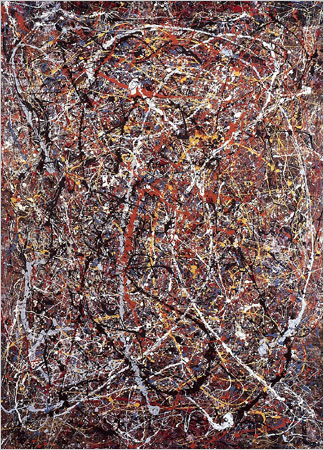 That’s the (edited) title of a documentary released in November about at septuagenarian retired truck driver who may have bought a Jackson Pollock painting for $5 at a thrift shop in San Bernardino. Emphasis on may, since no one from the art world’s formidable establishment will authenticate the painting.

Anderson Cooper on the May 6 airing of “60 Minutes" revisited the topic, well covered when the movie first came out. Using footage from the movie and his own interviews, Cooper captures the trucker Teri Horton's one-woman war against the “the art-world conglomerate conspiracy."

Horton claims she has physical evidence that proves the painting was at least once in Jackson Pollock’s hands—a fingerprint on the back of the painting that matches one found in his Long Island studio. But no authenticators take her fingerprint evidence seriously, and so far have denied her painting. Another artist, still living, has even claimed he may have painted it.

As this New York Times article points out, this story has legs because it's not really about whether the painting is a “real" Pollock, but a story about class. Horton claims she’s not being taken seriously because of her education and occupation, not because her painting is a fake. It’s hard to argue with her view of things when the former director of the Metropolitan Museum of Art coolly asserts, “She knows nothing. I’m an expert. She’s not." Horton’s been offered millions for the painting already, but won’t sell until she gets $50 million, which is what she believes it’s worth. She says she’ll burn the painting before she sells it for less.