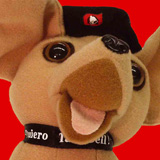 It's not a particularly new idea, but the Palau de la Virreina in Barcelona is staging an exhibit that traces the crass commercialization of "Guerrillero Heroico." The description of the show claims Alberto Korda's iconic 1960 photograph of Ernesto "Che" Guevara is "the most reproduced image in the history of photography."

The exhibit tracks the ways in which the image of a communist freedom have been used to buy and sell all manner of things--among them beer, soda and tacos. The commercialization of "Guerrillero," and the unintentional irony that inevitably ensues, have fascinated me for a long time.

My most recent brush with this image and its contradictions came a few weeks ago, when an American friend living in Venezuela e-mailed telling me she had just set up a new business, venezuelamania.org.The idea came to her after she had spent a year in Caracas seeing street vendors selling hats and t-shirts that pair the Che image with photos of Hugo Chavez, Venezuela's controversial president. She figured she might be able to market t-shirts and hats in the States and Europe, and the Web site was born.

"No, I'm not trying to spread a message or fight capitalism," she wrote. "Actually, I'm capitalizing on capitalism."

Much of the merchandise is made in China, to add another layer of strangeness. The marketing of a single photograph has truly turned Che into a populist hero.