Archibald MacLeish (1892-1982) was among other things a Pulitzer Prize-winning poet and playwright, Librarian of Congress, a Harvard-trained lawyer, a professor, a magazine journalist and a man who had what his son describes as the metabolism of a pygmy shrew. He was way beyond versatile; protean is a word that comes to mind. Sons of famous fathers, as our new President knows, bear a special burden. What was it like to be the younger son of the remarkable and many-faceted Archie MacLeish? William MacLeish has spent much of his life working out the answer to that one, and this book tells what he’s found.

The "uphill" in the title was the name of the farm in Conway, Massachusetts, that Archie and Ada bought in 1927. It was the MacLeish family’s ground zero, the place where the three children were raised and where Archie wrote finely crafted poems, cut hay and raised a few cows between periodic, sometimes extended diversions in precincts like New York and Washington, D.C.

But "uphill" has a second meaning in this memoir of a father and son. For Bill, it was an uphill struggle to understand his father, to find his own place in and out of his shadow, and to resolve, or at least identify, the complex mix of pride and love and envy and resentment that he felt about him. "For half a century I borrowed [his fame]," he writes, "using it as collateral to advance my own station. I came to think of it as a sun under which I could sit and get a nice tan." Eventually, and painfully, he found a sort of balance in his accommodation to Archie, and was able to view him as both cultural icon and parent. At the end he can write, with hard-won satisfaction, that "I’m a recovering MacLeish."

Archie, the son of a successful Chicago businessman, stayed on the prep school—Ivy League track until he was out of Harvard Law School and practicing law in Boston. Then, at 31, he made the first of several abrupt career changes, sailing to Europe with Ada to write poetry and run with the Lost Generation of American artists in 1920s Paris. Then or later the MacLeishes seemed to meet everybody worth meeting—Hemingway, Fitzgerald, Picasso, James Joyce, FDR and JFK, Dean Acheson and Felix Frankfurter, Katharine Hepburn and Richard Burton. Archie honed his art for five years in Paris and established himself as a poet, incidentally writing a line that comes as close as any to a definition of poetry: "A poem," he wrote in Ars Poetica in 1926, "should not mean but be." 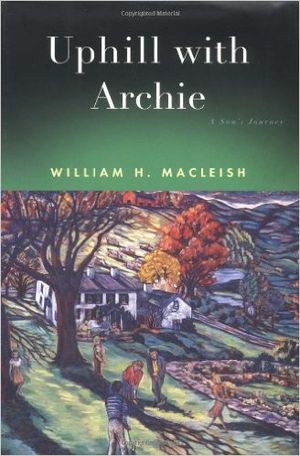 Uphill with Archie: A Son's Journey

Partly an homage, partly an attempt to come to terms with the man (and the legend), "Uphill with Archie" speaks to all sons and daughters who have never completely resolved their feelings about powerful parents.

But poetry was an uphill way to make a living even in good times, and when bad times arrived in the 1930s, Archie went to work for fellow Yale grad Henry Luce as a writer for Fortune. In 1939, with the first of his three Pulitzers already in his résumé, he withstood right-wing fulminations that he was a "fellow traveler" and became Librarian of Congress, moving on to a post in the wartime State Department a few years later.

In the end, Archie returned always to Uphill Farm. He wrote every morning in a stone shed within hailing distance of his farmhouse, winning a second Pulitzer for his Collected Poems in 1953 and a third for the verse play J.B. in 1959.

Bill’s memoir metamorphoses from his father’s story to his own as he embarks on a career as a journalist, oceanographer and college administrator, displaying a versatility almost matching the old man’s. Like sons from time immemorial, he could never get as much of his father as he wanted. "I was desperate for Archie," he recalls of his school years. "He was just too infrequently present, too insubstantial." Perhaps inevitably, the son’s life sounds a bit pale next to his father’s; it could be the hint of mystery Archie always preserved about himself. In a Smithsonian article about Archie (October 1983) that was the genesis of this book, Bill described Archie as a "secret man, as tightly chambered as a nautilus." Archie, his son wrote, was "more a figure of a father than a father, not so much a parent as someone on whose voyage I was a passenger."

Bill’s most fascinating career interlude was a stint as an assistant to Yale president Kingman Brewster in 1969-70, a time when the verities of the safe world that the MacLeishes and most of the rest of us inhabited were being bombarded regularly. Bill heard Brewster stun the Ivy establishment by declaring that he thought it impossible for Bobby Seale or any other black revolutionary to receive a fair trial in America, and he listened anxiously as Abbie Hoffman railed at a crowd 35,000-strong on May Day at New Haven Green.

It was during Archie’s final years—he was two weeks short of 90 when he died in 1982—that the father-son relationship finally ripened to something like mutual appreciation. Bill tended the dying Archie when his mother couldn’t, and recognized the moment when Archie finally decided to let himself die. "I don’t like this play," the old man said. To his son, his last words were, "You get along."