During a tour of Georgia some 40 years ago, jazz star Dizzy Gillespie made an unexpected stop at a grave marker by the side of the road on the site of the old

Westmoreland Plantation. In this solitary setting, Gillespie took out his trumpet and played a hymn in honor of Thomas Wiggins, who died in 1908 and was buried at that spot.

Throughout his life, Wiggins was known simply as “Blind Tom.” Music fans today wouldn’t recognize that name, but they all know the tradition that he started in the latter half of the 19th century as the very first African-American music celebrity.

Long before the abolition of slavery in the United States, African-Americans were already gaining a reputation as skilled instrumentalists. Even in the Deep South, they were often preferred over white musicians. But these performances were usually restricted to informal settings, dances and social events, and kept out of the concert halls where “serious” music was played.

“Blind Tom” broke through these barriers and achieved widespread fame in his day, performing in packed theaters in the U.S. and overseas. His tours generated a steady stream of feature stories and reviews in newspapers and magazines, and Wiggins achieved a celebrity status that no other black performer of his day could approach. His concerts brought in staggering sums—as much as $5,000 a month at his peak, the equivalent of $100,000 today—but he enjoyed few of the benefits of this wealth. The family of his former enslaver, who conveniently became Wiggins’s legal guardian after abolition, got rich off the pianist’s talent. 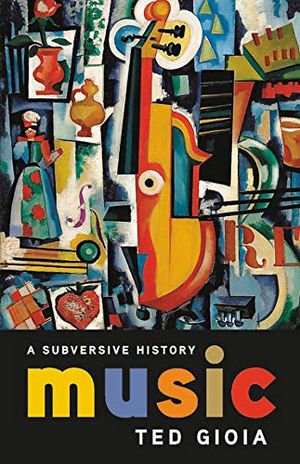 A preeminent music historian and critic presents a global history of music from the bottom up. Histories of music overwhelmingly suppress stories of the outsiders and rebels who created musical revolutions and instead celebrate the mainstream assimilators who borrowed innovations, diluted their impact, and disguised their sources. In Music: A Subversive History, historian Ted Gioia reclaims the story of music for the riffraff, insurgents, and provocateurs.

By any measure, Wiggins was a remarkable prodigy. At age 2, he could imitate sung melodies, and at four was already playing piano. When he was five, Wiggins composed his first piece of music. Friends and neighbors of slave-owner General James Neil Bethune were soon clamoring to hear the youngster perform, and the family accommodated these curiosity-seekers. But when Wiggins turned eight, Bethune decided that he ought to get paid for these exhibitions, and launched the music prodigy on his public life of concertizing.

Wiggins was a well-traveled performer even before his teens, but his appearances were not piano recitals in the conventional sense. Instead, they consisted of a series of gimmicky stunts. A key goal of a “Blind Tom” concert was comedy of the lowest sort, and surviving accounts stress how audiences often responded with cruel laughter to his onstage activities.

In addition to his blindness, Wiggins demonstrated signs of what we know today as autism at a young age. During his harsh childhood in Georgia, he was often confined to a high-sided wooden box—in the days of slavery, that was a childcare option for a youngster who might wander off and get hurt while parents were working. This sensory deprivation may have heightened the child’s perceptions of sounds, but it also left lasting damage to his psyche and emotions.

His behavioral quirks added to the circus-like marketing of “Blind Tom,” which proved to be just as shameful as his financial exploitation. A publicity poster from 1860 announced that he was the “greatest living musician,” and promised that audiences would witness amazing feats. But the details make clear how gimmicky the show would be—Wiggins would play two pieces of music at once (conversing at the same time), perform with his back to the instrument, and engage in various types of mimicry both musical and verbal.

In short, the first black musical celebrity in American history was promoted as an “idiot savant,” a kind of keyboard freak show for curious spectators. The othering of musicians is probably as old as music itself—shamanistic cultures even prized practitioners who demonstrated abnormalities—but Wiggins’s treatment represents an especially grotesque chapter in this long, cruel history.

In subsequent decades, many blind black musicians would find their disability attached to their name, part of their ‘branding’. After Wiggins’s death in 1908, the music industry promoted Blind Lemon Jefferson, Blind Willie Johnson, Blind Blake, Blind Willie McTell, Blind Boy Fuller (a double-whammy there, both blind and a boy, although Fuller didn’t start recording until his 20s), and many others. When I’ve given classroom talks in recent years about the Blues tradition, students are often puzzled, and certainly uneasy, about this way of referring to music pioneers. I can’t blame them—these stage names are part of the music’s history, but perhaps one that we would prefer to forget.

It’s worth considering what Wiggins might have done in a different time and place. An observer who heard him playing at age 11 noted the “startling beauty and pathos” of his “strange, weird improvisations.” You can’t help but be reminded of jazz from this description—yet that genre wouldn’t even exist for another half-century. This side of Wiggins’s musical talent evidently shook up listeners. One critic dismissed the performances as “wild barbaric, racial laments” and another, searching for a descriptor, could only explain that they sounded like “echoes of plantation songs.”

Still other accounts hint at supernatural and clairvoyant powers that “Blind Tom” was said to possess. Newspaper stories testified to his ability to describe landscapes he couldn’t see with uncanny accuracy, or to learn music from birds and the natural world. His reputation for psychic powers spread so widely that Harry Houdini, the famed magician who worked to debunk the claims of spiritualists, felt compelled to denounce “Blind Tom” as a fraud.

Yet it’s clear that many observers believed that Wiggins had a genuine spiritual presence and talents that went far beyond playing the piano. In another culture, he would have become a shaman or a mystic. In a later day, he could have flourished as a jazz or Blues icon. But in his own time and place, this first black star of American music was permitted only two roles: a gimmicky stunt for audiences and a money-maker for his bosses.

The death of “Blind Tom” in 1908 was a front-page story in newspapers nationwide. Many readers had seen him perform during his decades of touring, and the published accounts included firsthand stories and tributes. But what the newspapers didn’t report was that Wiggins was buried in an unmarked grave. The brilliant musician who had earned so much for those who exploited him wasn’t even allowed a headstone.

A grave marker was finally erected on his burial spot in 1976. A handful of books and articles have appeared since then, and Wiggins is now more than just a tragic footnote in American music history. But, sad to say, he is inevitably remembered less for his artistry than for the degraded spectacle of his life and times.

But make no mistake, Thomas Wiggins was a music pioneer, and deserving of our respect. In the century following his death, African-American performers would change the whole landscape of global music, some of them rising to the highest peaks of fame and adulation. Thomas Wiggins never enjoyed the same respect, but he was there at the very start. The nation’s first black music star, he helped to set that whole cultural revolution in motion. It’s an extraordinary achievement, and much larger than any stone memorial or public marker could ever convey.

Ted Gioia writes on music, literature and popular culture. This essay is adapted from his latest book, Music: A Subversive History, which is just out from Basic Books