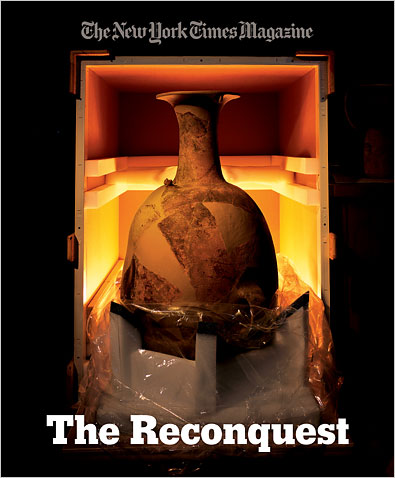 The cover story in this week’s New York Times Magazine is about repatriating artifacts to the countries where they were discovered. Egypt wants the Rosetta Stone back; China wants none of its art objects made before 1911 sold in the United States; and Peru wants its Machu Picchu artifacts back from Yale, which first sent archeologists to excavate the site in 1911-1912. The article, by Arthur Lubow, focuses on the last case, examining arguments for and against repatriation, as well as the players involved and what they have to gain and lose.

This article caught my eye, since about three weeks ago I visited Tikal, a city of ancient Mayan ruins in northern Guatemala. Our Mayan tour guide told us that in 1877 a Swiss researcher, Gustav Bernoulli, led a party to Tikal and took most of the original carved wooden lintels from above the door jambs of two of the site’s largest temples. The lintels are now on display in Basel. Back in Tikal, the door jambs have been outfitted with copies. “Maybe we should have planned a trip to Switzerland instead of Guatemala," quipped a dismayed member of our group.

A worldwide debate is percolating over whether countries that lost their artifacts to American and European archeological digs should now get them back. “In general, anything that is patrimony of the cultures of the world, whether in museums in Asia or Europe or the United States, came to be there during the times when our governments were weak and the laws were weak, or during the Roman conquest or our conquest by the Spanish," says Hilda Vidal, a curator at the National Museum of Archaeology, Anthropology and History of Peru in the Times piece. “Now that the world is more civilized, these countries should reflect on this issue. … I am hopeful that in the future all the cultural patrimony of the world will return to its country of origin."

If Lubow’s exhaustive examination of just this single, complicated case is any indication, Vidal’s wish won’t come true in the foreseeable future.