Frankly, Earth’s polar environments can be a bit polarizing. “It’s a love-hate thing, being in the Arctic and Antarctic,” says photojournalist Camille Seaman, who decidedly fell in love with Earth's poles. Seaman has spent the last decade of her career documenting the icebergs, polar bears, penguins and other wild residents that populate the frigid polar landscapes. “If you love it, you’re always trying to figure out, How do I get back?” she adds.

Now Seaman hopes to bring a love of the Arctic and Antarctic to those of us who make our homes in more temperate climes, with a new book of photos and personal essays called Melting Away (Princeton Architectural Press). Seaman hopes her images will raise awareness about the plight of the animals and ecosystems that inhabit the far edges of the Earth.

The long-time photojournalist’s first trip up north was pure coincidence. In 1999, she volunteered to give up her seat on a flight to California in exchange for a free round-trip ticket anywhere. She chose Kotzebue, Alaska, because she liked the name and had never been there. “It really was quite serendipitous,” recalls Seaman.

Since then she has traveled to the Arctic and Antarctica on and off between 2003 and 2011. Over the years, she picked up gigs as a ship’s photographer on scientific expeditions and commercial vessels. Working alongside researchers studying the area, she began to understand the things she was seeing through her lens. “I got first-hand, in-the-field education as to not only what was going on, but how to identify it, right there with my eyes and my camera,” she says. 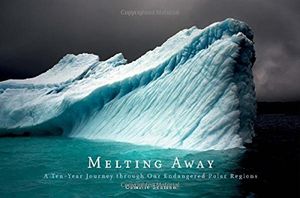 Melting Away: A Ten-Year Journey through Our Endangered Polar Regions

For ten years Camille Seaman has documented the rapidly changing landscapes of Earth's polar regions. As an expedition photographer aboard small ships in the Arctic and Antarctic, she has chronicled the accelerating effects of global warming on the jagged face of nearly fifty thousand icebergs.

For instance, snow accumulation has doubled in Antarctica since 1850, and extreme snowfall can cause problems for penguins. Not used to the wetter weather, the animals don’t instinctively leave their nests. In 2001, heavy snow buried some nesting Adélie penguins alive, cutting their numbers by 40 percent. Seaman had heard stories of the phenomenon, and actually witnessed two Gentoo penguins get buried in 2009. And in the Canadian Arctic, she was shocked to see a hungry polar bear stumble onto an islet with several species of birds nesting and eat all of the eggs in a mere two hours. Polar bears do occasionally eat bird eggs, but usually as a supplement to heartier meals of seals hunted from icy perches. With less sea ice available, the bears are returning to shorelines earlier and hungrier.

Some birds migrate north from North America and Russia to lay their eggs in Arctic regions, overlapping with the bears’ return. While snacking on eggs might benefit individual bears in the short term, such activities may be contributing to a decline in bird colony numbers, with implications for species further down the food chain. “The eggs don’t hatch. The birds don’t return to Northern Europe or Russia to eat the bugs and then the crops have problems with the bugs. You can really see the [potential] ripple effect,” Seaman says.

Seaman also highlights the changing landscapes of polar ecosystems in Melting Away. Icebergs are often the subjects of her photographs, and they almost become a unique species. Seaman attributes this effect to her own Native American heritage; she was raised as part of the Shinnecock Montaukett tribe on Long Island. “An iceberg is literally teeming with life, and it is its own entity,” says Seaman. “I’ve never seen two that were identical.”

In the last 10 years, scientists have also gained a deeper understanding of how warmer sea surface temperatures and changes to ocean chemistry will affect organisms from bears to bacteria living in the polar regions. It doesn’t look good. Two thirds of emperor penguin colonies in Antarctica are projected to shrink by 50 percent in the next century. Last week, researchers found that most polar bears face similarly dismal odds at the opposite end of the globe. And just this week researchers reported that glaciers in West Antarctica have tripled their rate of loss in the last 10 years.

Though 97 percent of scientists agree that anthropogenic climate change is happening, much of the public remains skeptical. Seaman is hesitant to tell people what they should or shouldn’t do about it. Instead, interspersed through her shots of turquoise sea ice and king penguins are personal stories about topics such as motherhood, nature and photography.

“I wanted to speak as a pedestrian, in hopes that people would recognize some of themselves in some of my stories,” Seaman explains. She was initially pretty apathetic about climate change and hopes to reach similar readers. Perhaps art may succeed where scientific data sometimes fails—in winning the hearts and minds of a new generation of environmental stewards. “A good strong image can complement the data,” says Seaman. At the very least, she hopes readers will think about what sort of planet they want to live on in the future.