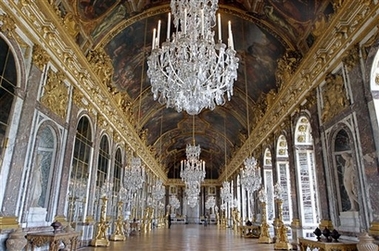 “Extreme Elegance" was the prescribed dress code for the Bal des Artistes held on Monday night to celebrate the 60th birthday and fall couture collection of the French fashion house of Christian Dior. What’s the perfect venue for a couple thousand international revelers, meticulously handmade dresses that retail for five figures (at least) and hired help that includes both fire-breathers and fire-eaters? Versailles, bien sur.

Designer John Galliano, celebrating his tenth year at the creative helm of Dior, commandeered L’Orangerie de Versailles for a show that was a whirlwind tour through the history of art and fashion. Among the over-the-top looks were ensembles inspired by the work of everyone from Manet and Monet to Cocteau and Watteau. One alabaster-skinned model in a peach-colored confection of a dress (above left) resembled a walking Reynolds portrait.

The evening’s overall theme, however, was more Goya than Gainsborough, inspired by Galliano’s recent trip to Seville, Spain. Like something out of the drunken, late-reign nightmares of Louis XIV, flamenco dancers prowled the palace halls.

In today’s New York Times, Cathy Horyn praises Galliano’s artistry. “Many of the clothes may have looked overpowering for mere mortals, and perhaps they are, but consider the source behind it," she writes. “Would we prefer it to be less complex, less intense?" In the setting of Versailles, certainly not. The opulent venue would have swallowed whole the architectural silhouettes of Armani or the American sportswear-influenced defiles of Ralph Lauren.

Women’s Wear Daily compared Galliano’s couture creations to the crown jewel of Versailles. “Just like the Hall of Mirrors, they exist because someone had an over-the-top thought and the wherewithal to realize it, the latter not only of talent and resources but guts galore." And in fact, just last week, the Hall of Mirrors (above middle) reopened to the public after a $16 million renovation that took more than three years. Louis XIV commissioned the grand hall as a monument to himself.

Among the Hall’s most famous features are the overhead paintings by Charles le Brun. The more than 30 stucco-framed compositions depict Louis XIV in his various roles, including Roman Emperor and victor over foreign powers. Galliano too is famous for his myriad guises: one season he is dressed as a pirate (complete with sword), the next as a British dandy. And this season was no exception.

After the last model’s exit, Galliano emerged onto the 163-yard runway to take his bow—dressed in a beaded matador costume and bright pink tights. The Sun King would have been proud.