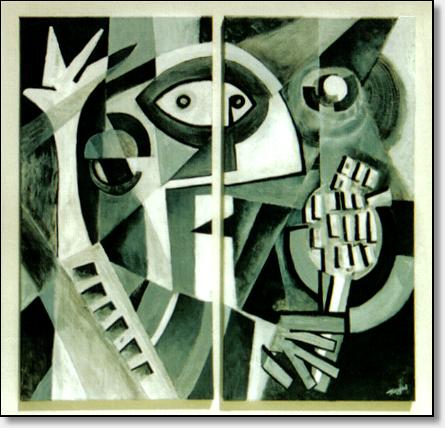 A couple of days ago, I interviewed artist Douglas Tharalson at his home and studio, a 2.5-acre ranch in Agoura tucked away in the middle of the Santa Monica Mountains National Recreation Area.

Agoura is near Malibu and several other overdeveloped pieces of California coast. Tharalson got in early and cheap on the land he now owns, and now he’s happily inspired by the mountain views and open space where he has worked there as a painter and sculptor for the past 20 years.

I asked him why he paints in a throwback cubist style, and he told me it’s his homage to the cubist artiste’s lifestyle. “I’ve always been attracted to the lifestyle even more than the art," he says. He imagines Picasso, Gris, Braque and others lived as real bohemians while inventing cubism, and their legendary time in Montmartre is what attracted him to painting in the first place.

Tharalson says Jean Varda and Jirayr Zorthian were mentors from a generation ago who carried out the "lifestyle." The two artists worked in California their entire adult lives and both were known as free spirits. Varda lived on an old ferryboat off the coast of Sausalito, and Zorthian lived on a 45-acre ranch in Altadena.

When Zorthian died in 2004, an archivist who had interviewed him for the Smithsonian Archives of American Art wrote, “I came to recognize that he was one of the few among us who was truly interesting." The two are remembered for the way they lived as much as for the art they left behind.

Now 59, Tharalson thinks that’s a goal an artist ought to work toward, no matter what his medium is.