Readers of Stephan Talty’s bestselling detective novels know he has a taste for dark fare, a predilection borne out when we asked him about what books, music and other media he’s been consuming lately.

Your new book, The Black Hand, is a non-fiction thriller about a turn-of-the-century Italian detective investigating a particularly gruesome epidemic of Mafia extortion and murders in America. Do you need relief from all that grisliness?

In my book research, I listened to Aida and La Traviata and other operas that my detective, Joseph Petrosino, talked about to American reporters to show that Italians weren't just violent, lowbrow ditch diggers. I think the romanticism and lyricism of those operas helped carry him through.

And what do you listen to lately that does the same for you?

Not long ago I read a book, Storms, by Carol Ann Harris, about Fleetwood Mac’s break up. The summer Rumours came out, my sister’s friends would come over for listening parties. I was into harder stuff then, but now I find listening to the album is like reading four different memoirs, backed by amazing music. 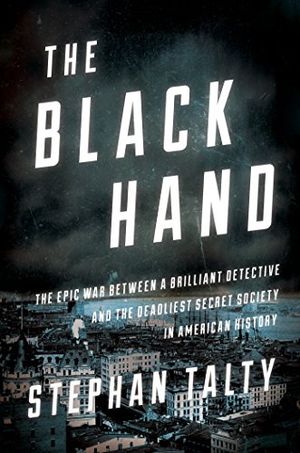 The Black Hand: The Epic War Between a Brilliant Detective and the Deadliest Secret Society in American History

Unfolding a story rich with resonance in our own era, "The Black Hand" is fast-paced narrative history at its very best.

Where do you look for inspiration?

Every nonfiction writer is desperate for the next idea and archival sites can post small things that spark something in your brain, so on Twitter I follow WeirdHistory. My other favorite is by Chris Arnade , a former Wall Street finance guy, who spent the presidential campaign, photographing and talking to the lost people, like the ones I grew up with in South Buffalo, New York, who got wiped out when the steel mills closed.

For The Black Hand, I drew visual inspiration from Caravaggio’s three huge canvases at the Church of San Luigi dei Francesi in Rome. Together they bring home the darkness and physical brutality of the world he lived in, or how he saw the world. In one Black Hand case, the terrorists cut off a victim’s arms at the elbow, but let him live as a walking advertisement. The intent was to shock, and Caravaggio's paintings shock me.

Is there anything in modern media that delivers that same visceral fascination for you?

I’m in the middle of S-Town. It's like Flannery O'Conner, Southern stories about people who never find likeminded people. Now when I’m driving back to Buffalo, passing through these nameless little towns, I’m always wondering if there is a great tragedy behind the darkened windows.

What's your favorite story on television?

I was struck by “The Leftovers” [HBO’s series about the people left behind by the rapture]. Usually depictions of the end of the world are like World War Z, in which all the action is monumental. I like how grief-stricken [the show’s] characters are. They are trying to find themselves when everything seems to be ending.

So you like that close detail in epic events. What other stories move you that way?

I just finished Journey into the Whirlwind, a gulag memoir by Eugenia Ginzburg. The great Stalin-era memoirs were written by women, and unlike men’s survival stories, which are physical feats, Ginzburg’s is about keeping a memory of who you once were as this incredible machine grinds you down.

Mitchell is a former senior long-form writer for the New York Daily News and the author of three non-fiction books. Her most recent, Liberty’s Torch: The Great Adventure to Build the Statue of Liberty, came out in 2014. Her work has also appeared in New York, the Wall Street Journal, GQ, Details, O, Glamour and The Nation.