The images are iconic to anyone who has dipped a toe in the vast and enigmatic pool of neuroscience: A delicate branching pattern emanates from and surrounds a small black splotch. Varied line weights hint at the three-dimensional structure the drawing describes, reminiscent of a bare-branched tree in winter. These are Spanish neuroanatomist Santiago Ramón y Cajal's drawings of neurons.

Over five decades of work, Cajal (1852-1935) created more than 2,900 drawings detailing the nervous system's architecture. Countless hours of close observation informed those drawings and helped him realize two fundamental truths of neuroanatomy. First, he deduced that the brain was made up of many individual cells, called neurons, rather than a spider web-like structure of fused cells (the view of many of his contemporaries). Second, the electrical signals those cells generate flow through neurons in one direction: branching dendrites receive the pulse, pass it to the main cell body and then along their axons—long projections that can connect distant parts of the brain.

For his work, Cajal shared the 1906 Nobel Prize in Physiology or Medicine with Camillo Golgi, an Italian who invented the tissue staining method Cajal used to see individual neurons. Incredibly, it would be decades before other researchers could confirm his views of brain structure and function. Now, he is heralded as the father of modern neuroscience.

"He was a genius and a great scientist, who was able to see things others could not," says Eric Newman, a University of Minnesota neuroscientist who co-edited a new book about Cajal, The Beautiful Brain: The drawings of Santiago Ramón y Cajal, with colleagues Alfonso Araque and Janet M. Dubinsky, also neuroscientists at the university. Their book contains more than 80 of Cajal’s drawings and is the companion to a traveling exhibition that opens January 28 at the Weisman Art Museum in Minneapolis. 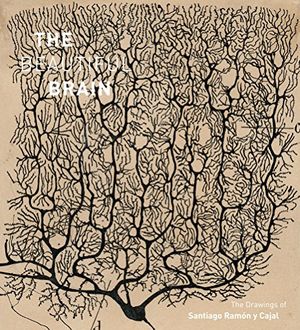 The Beautiful Brain: The Drawings of Santiago Ramon y Cajal

As the book and show demonstrate, Cajal was a skilled artist and his powers of observation led him to be a titan in science history.

The stark beauty of Cajal’s drawings arises from the intricate dictates of neuron biology and the dark Golgi staining method that Cajal perfected, but his work contains something more. Many of the images are so informative that they are still used in neurobiology classes today. “His drawings are still the best drawings,” Newman says. “They illustrate so many key points.” Even modern imaging technologies cannot surpass the elegance with which Cajal linked form and function.

The book is divided into four major sections. The first introduces the menagerie of different cell types in the brain, from the exuberant branching Purkinje neurons that keep the body upright and balanced to sparse neurons that regulate the muscle contractions that move food through the gut.

The second section shows how those many cells integrate to create sensory systems. Here, Cajal’s images explore how the brain and sensory organs receive and process smells, sights and sounds. The third section includes drawings of neurons working together in circuits, building pathways that connect different parts of the brain or give rise to certain behaviors. The final section explores images of cells growing, dividing and dying.

Newman wrote the captions for the images. "From one drawing to the next, I try to tell a story so that people can learn about neuroscience as they read," he says. But his explanations are far from didactic; instead the story of the nervous system unfolds compellingly, eased in no small part by the visual treat of Cajal's work.

“Some of the drawings we chose primarily because of their beauty,” Newman says. Then, the team had to dive into Cajal’s journals and original scientific papers to better understand the context and significance of each drawing.

The book also features an essay by Larry W. Swanson, a neurobiologist at the University of Southern California, and another co-written by Lyndel King, director and chief curator of the Weisman Art Museum, and Eric Himmel, Editor in Chief of Abrams Books, the publisher.

Swanson delves into Cajal's life and scientific accomplishments, calling him "a fascinating, multidimensional, larger-than-life character." King and Himmel explore his art and methods. Both essays draw from the man's autobiography, Recollections of My Life.

Born in 1852 in a small town in northeastern Spain, Cajal described himself as a poor student, shy and unsociable, Swanson writes. At a young age, he drew compulsively and wanted to be an artist. His father, a local doctor, wanted him to be a physician. The two reconciled when Cajal discovered how much the human body fascinated him and his father saw how excellent his drawings were for teaching anatomy. Cajal attended a local medical school.

After malaria contracted during army medical service left Cajal too weak to become a practicing physician, he turned to histology, the microscopic study of body tissues. He had a flair for poetic explanation as well: Cajal wrote that histology revealed to him the “the hum of the restless beehive which we all have within us.” At a self-built laboratory in his home, he honed his craft. A visit to Golgi in Italy introduced him to the silver-based method that stains a few random neurons deep black, providing the basis for his drawings.

Cajal often distilled observations of hundreds of neurons to draw the singular elegant structure in his final image. King and Himmel use one of his self portraits to imagine his typical day: Cajal is seated at a table holding several microscopes, resting his head on his hand and gazing at the viewer. Shelves of chemicals in glass bottles and stained cloth on the table attest to the tissue staining practiced on animal tissues, including those from rabbits, frogs and pigeons as well as on human cadaver tissues.

The essayists explain that Cajal could peer through the microscope in front of him and sketch on a small drawing surface to the side. They write:

He might start a drawing in pencil, and then later go over it in India ink, adding ink washes or watercolor for tonal areas. Often, he would spend a morning at the microscope without sketching at all and draw from memory in the afternoon, returning to the microscope to confirm and revise his observations; we can see traces of the process in whited-out areas that he wasn't happy with.

That laborious process was key to Cajal’s discoveries. "You could argue he was just a much better observer and able to interpret what he was looking at under the microscope," Newman says.

For Newman, Cajal's work carries special resonance. Newman's own research focuses on non-neuronal cells in the brain called glia. Traditionally, these cells have been thought of as passive support cells, the second fiddle to neurons. Only in recent years has this idea been overturned. Glial cells are major players that encourage and prune the connections between neurons, help modulate neuron signaling and regulate blood flow in the brain. In yet another example of his insight, Cajal recognized glial cells’ importance more than a century ago.

"He actually proposed many of the functions of glial cells that we are now finding out are true," Newman says.

The book closes with a final essay by Dubinsky that provides and explains images of the brain and its structures created with modern techniques and published in scientific journals today. These include a Brainbow mouse, which bears neurons that fluoresce in approximately 100 different colors, and a digital reconstruction of the very end of an axon—based on electron scanning microscopes and protein identifying experiments—packed full of chemical messengers waiting to spill out and send information to the next cell. Their multicolored splendor highlights what Cajal did right as well as how far scientists’ understanding has advanced since his day.

Even the science-shy can appreciate the visual splendor of Cajal’s drawings and how thoroughly they illuminated the mysteries of the brain, which can seem as daunting as the universe itself. "When we look at his drawings today," King and Himmel write in their essay, “we see not diagrams or arguments, but the first clear picture of that remote frontier, drawn by the man who traveled farthest into its endless reaches."

The Beautiful Brain was published January 17 and is available for purchase. The companion exhibition with Cajal’s original drawings is at the Weisman Art Museum in Minneapolis from January 28 to May 21. Throughout this year and into the spring of 2019, it will travel to Vancouver, Canada; New York City; Cambridge, Massachusetts; and finally Chapel Hill, North Carolina.