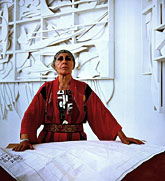 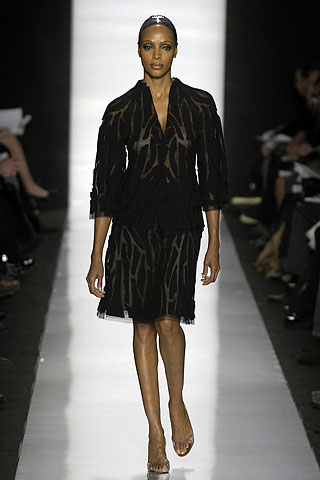 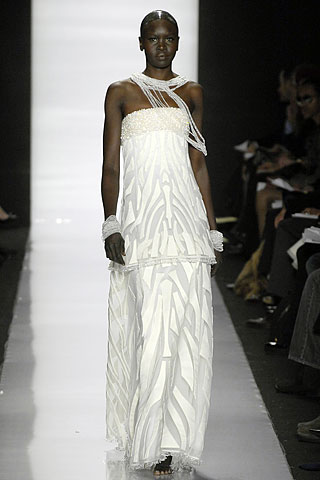 17th-century Dutch portraits. The practiced spontaneity of Franz Kline. Geisha headdresses. Louise Nevelson’s wall constructions. This is the artistic and cultural mix that inspired the most recent collection of fashion designer Ralph Rucci.

Among the ensembles in his Spring 2007 haute couture collection are a white strapless gown (pictured above, right) and a suit in black wool crepe (above, middle) based on the collages of Nevelson (above, left). The influence didn’t stop there. In another nod to the Abstract Expressionist assemblage artist, Rucci capped the heads of his models with Saran Wrap and fitted them with double sets of false eyelashes (Louise loved a good headwrap almost as much as she loved a smoky eye). According to Rucci, the goal was to make them “look like Nevelson conceptually and Nevelson realistically."

The starting point for the collection was “the thread of life motif, where the cloth finally leaves the surface of the fabric and indeed, becomes a three-dimensional surface," Rucci told me recently. Inspired by Nevelson’s fragmented black on black wall, he achieved a “cut that echoes the biomorphic line beneath the surface."

Rucci may be the best designer you’ve never heard of. He has no interest in creating this season’s must-have handbag or licensing the name of his line—Chado Ralph Rucci—to enterprising umbrellamakers and discount stores. “He’s someone who digs deep in a single field rather than branching out widely in different areas," says Valerie Steele, director and chief curator of the Museum at the Fashion Institute of Technology (FIT) in New York City.

Named for a ritualized Japanese tea ceremony with 331 individual steps, Chado Ralph Rucci is two parts luxury and originality, one part eccentricity, and Rucci pursues these values without compromise. In 2002, he became the first American since Mainbocher in the 1930s to show his own collection during couture week in Paris.

As with the work of Kline and Nevelson, most photographs of Rucci’s creations don’t do them justice. If you walk fast, you can catch the final days of the retrospective of Rucci’s work at the Museum at FIT. “Ralph Rucci: The Art of Weightlessness" features not only the highlights of the designer’s 25-year career designing ready-to-wear and made-to-order clothing for women but also some of the artworks and historical objects that continue to shape and inspire it.

Cy Twombly drawings, Buddhist deities and Francis Bacon lithographs sit among the dresses, skirts, tops and capes they inspired -- some subtly, with kindred color palettes, and some quite literally, in the case of the “Twombly Swan" dress, which translates the artist’s wiggly painting and scribbly pencil marks into impossibly intricate French embroidery on white silk gazar. Suspended from the ceiling are Rucci’s “Infanta" dresses, evening gowns in the spirit of Velasquez’s little princesses.

And, like the works of art they are, Rucci’s clothes reward a closer look. “The clothes are of the highest degree of complexity, he says. “That they are ‘felt’ as simple is the accomplishment. The viewer feels the simplicity, but on closer inspection is brought into the subliminal experience of their intensity."