Chefs may or may not be performing artists. That’s open to debate. Cooking is a craft, but some would argue that preparing the same dish again and again—the hallmark of professional consistency—is imagination-free rote repetition. Still, in this age of cooking shows and open kitchens, chefs are undeniably onstage, and a new book reveals their rich creative process. Eccentrically titled Something to Food About, it’s a collection of conversations between ten chefs and the Philadelphia-born hip-hop drummer and Tonight Show bandleader Questlove.

It shouldn’t come as a surprise that a musician is able to unlock chefs’ innermost thoughts about creativity. Performers often make restaurants an obsession while they’re on the road, and few more than Questlove: His Instagram feed features snapshots of food from fried chicken and waffles to Jiro Ono’s triple-Michelin-starred sushi. Chefs also tend to be music-obsessed. Many of the dozens I’ve interviewed have played in a band at one time or another. The two professions have striking similarities. Each relies on a script—a score or a menu—that can be interpreted as an infinitely variable set of instructions.

Chefs and musicians also face a similar challenge: pleasing an audience while opening it to new ideas. In one passage, Questlove recalls a meal he ate at the Chicago restaurant Next—a discomfiting mixture of eggshells, eyes and bones. “Not only did I manage to put it in my mouth, but it was one of the best things I ever had,” he says—and then compares the experience to playing the white frat-boy hit “Sweet Caroline” at a DJ set for a mostly black crowd. “They stopped and looked at me like they might rush the booth and flip over the turntable,” he recalls. “But then they caught the taste of the song and started to sing.”

Questlove is like an irrepressible adolescent surrendering to any riff he hears in his head. Speaking with New Orleans Cajun chef Donald Link, he refers, in a short space, to The Police, the Epcot theme park and the movie version of The Wiz. There’s plenty of talk, too, about specific dishes, and for those who want to see them, moody, harshly lit photographs by Kyoko Hamada.

Sheer, baffling novelty is part of the performance. The cerebral Seattle software visionary-turned-chef Nathan Myhrvold, whose food lab gave birth to the masterly five-volume Modernist Cuisine, admits that some of the “new, weird things” chefs put in front of diners are designed to make them say, “What the f--- is this?” But it’s these riffs the food industry turns to when looking to attract disenchanted consumers. We wouldn’t have, say, sriracha-roasted peanuts if it weren’t for the kind of back-street trips American chefs have taken through northern Thailand. Even if food can’t be reproduced, it can be stolen, reinvented, reimagined—and Questlove’s freewheeling conversations make us feel present at the creation. 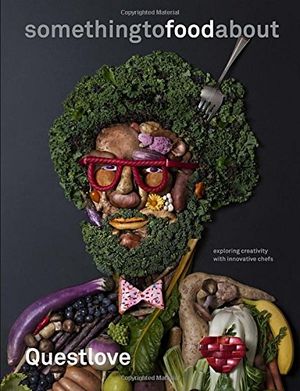 Something to Food About: Exploring Creativity With Innovative Chefs

Corby Kummer is a senior editor at The Atlantic and author of The Joy of Coffee.