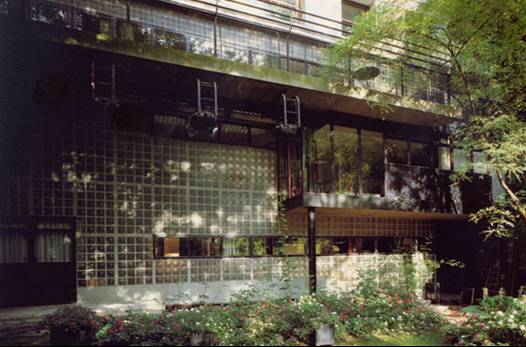 Philip Johnson’s New Canaan stunner reopened to the public in April, and tours for this year promptly sold out (console yourself with a video tour and book now for 2008!). Frank Gehry has a cloud-like glass building in the works for Bernard Arnault and his Louis Vuitton Foundation for Creation.

“The house has been compared to a Surrealist artwork, a theater stage, and an operating room," notes Ouroussoff, who concludes that it’s “above all, an exquisite machine." And he should know, because he got to live there with his girlfriend for a few days this summer, fulfilling both a personal fantasy and that of a chorus of editors.

After Ouroussoff and friend get settled with the help of a housekeeper (“Light switches. Check. Bathrooms. Check. Where to hang our clothing. Check."), we learn of the house’s Duchampian division into male and female realms, its elasticity, and the ability to transform the mood of the entire place with the flick of the outdoor floodlight switches. In short, it’s pretty much perfect: “the perfect balance between the need for companionship and solitude, a utopia of the senses."