There was his nose, to begin with. In the first version of “Rudolph the Red-Nosed Reindeer,” it glowed “like the eyes of a cat,” and Rudolph’s friends nicknamed him Ruddy because of it. When Santa came in on Christmas Eve, he found Rudolph’s bedroom alight with a rosy glow that Santa pretended was coming from his forehead. (“To call it a big, shiny nose would sound horrid!”)

Rudolph was born in 1939 at the Montgomery Ward department store headquarters in Chicago. He was the star of a humble coloring book, written by a copywriter, Robert May, who almost named the protagonist “Reginald.” May, who’d been lonely as a child, based the character on himself. Store executives fretted that shoppers might think Rudolph’s nose was red because he was drunk, but something about Rudolph’s story spoke to people. He was an outcast, down on his luck. When Santa gave him a job (it was the Great Depression, after all)—well, something clicked. That Christmas, the company passed out two and a half million copies of the book.

And so a sales ploy about an oddball redeemed by his big red honking disadvantage became centrally enshrined in American lore. The story became a hardcover children’s book, then a Disney-esque cartoon short created by Max Fleischer (who also turned Popeye and Betty Boop into stars), then a Little Golden Book. Rudolph gained and lost various family members over the years. Once he had a son named Robbie; another time, a brother called Rusty. Later he was given a different brother, the cranky and overweight Ralph.

His genealogy was absent in Johnny Marks’ famous song, but that didn’t stop Gene Autry’s recording from selling almost two million copies in its first Christmas, in 1949. To date, 150 million copies have been sold, and by mid-December, you’ll feel as though you’ve heard all of them. For some people, meanwhile, Christmas isn’t Christmas without the 1964 stop-motion animated film. It’s 100 percent horrifying. Why was Rudolph’s best friend an elf who dreams of being a dentist and knocks out the Snow Monster to extract his teeth?

Another mystery surrounds the relationship between Marks (the songwriter) and May (the ad man), given that Marks happened to be married to May’s sister. In interviews, Marks never mentioned the connection. May spoke of testing out couplets on his young daughter, Barbara. After a second marriage, Barbara stopped coming up in interviews, until his second wife died and he married her sister.

Well, families are never at their best around the holidays. But there’s a happy footnote: After May and Marks had both taken their final sleigh rides into the sky, their children agreed to share the riches Rudolph brought in forevermore. Which seems pretty Christmas-spirited to me. 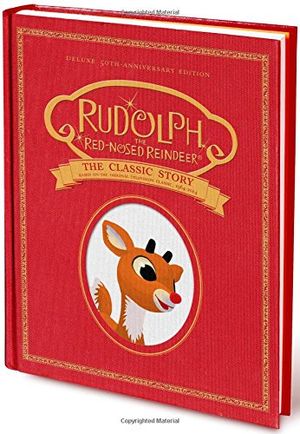 The Rudolph the Red-Nosed Reindeer television special first aired on NBC December 6, 1964. Fifty years later, it has become a beloved Christmas classic—capturing the heart and wonder of generations of fans. Here is the complete story from the classic TV show, gloriously illustrated in full color and in an elegant gift book edition.