The Inspiring Monk Who Lived in a New Mexico Cave

The mountaintop home of an Italian hermit who lived in the U.S. in the 1860s still attracts a handful of pilgrims 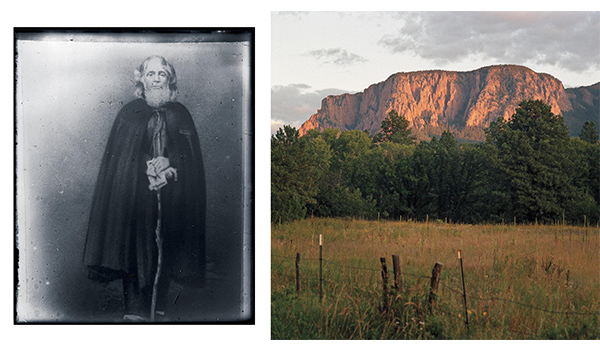 Left, Giovanni Maria de Agostini, a peripatetic Italian monk who was banished from Brazil, reached northern New Mexico on foot in 1863. He holed up on a mountain that would become known as Hermit Peak, today the object of an annual pilgrimage. Right, view of Hermit Peak. Palace of the Governors Photo Archives Collection / Gabriel Ellison-Scowcroft

About 50 miles east of Santa Fe, New Mexico, in the Sangre de Cristo mountains, Hermit Peak rises some 10,000 feet amid the pinyon-juniper woodland of the Pecos Wilderness. The hermit for which it was named was an Italian-born monk, Giovanni Maria de Agostini. For three years in the 1860s, Agostini lived high up on the mountain, foraging for food and getting water from a spring. Despite his self-imposed solitude he managed to attract a following during an era of religious fervor and experimentation in America. At the end of the 19th century, a local organization created in his honor, the Sociedad del Ermitaño, or the Society of the Hermit, counted 62 members. Their main practice was a long trek to the peak to pray and erect crosses.

Today, the Society of the Hermit’s solemn tradition has faded almost to the vanishing point, and might be lost entirely if not for one family. “I go to Mass on Sundays and I take my kids, but I feel closer to God praying in that cave, remembering that my uncle used to be right here and my grandpa used to be right here,” said Joseph Abeyta, a 36-year-old resident of Las Vegas, New Mexico. There are a handful of other Society members still in the area, but this past September, the Abeytas were the only ones who made the trek to Hermit Peak. The photographer Gabriel Ellison-Scowcroft accompanied the family to document this unique rite of faith.

The hermit himself was never part of any established parish or monastery. Agostini was born in 1801 and, according to his writings, “began to incline toward a solitary life” at the age of 5. In his 30s, he joined the Maronite Church in Rome. Maronite Christians weren’t mainstream in Italy—they’re mostly found in Syria and Lebanon—but Agostini wanted to model himself on St. Anthony of Qozhaya, a third-century Maronite who spent 20 years in solitude and then founded the first Christian monastery.

“Agostini did the same thing St. Anthony did,” says David Thomas, author of the biography of Agostini Wonder of the Century: The Astonishing World Traveler Who Was a Hermit. “He would go to some spot, always picked a cave to live in, and then he would live an exemplary primitive life there.” Agostini traveled all over Europe and South America, crossing the Andes twice and canoeing down the continent’s major rivers.

Word spread whenever the bearded holy man appeared on a new mountaintop. “Most hermits just want to live out in the middle of nowhere,” says Thomas. “This guy was very intelligent, very well educated. He had a purpose.” Agostini attracted such a huge following in the Brazilian state of Rio Grande do Sul that the government arrested him. The state’s top official wrote in a letter that the monk had “encouraged great fantacism about himself.”

In 1861, Agostini headed to Mexico, where he again attracted a large following and was sent to an insane asylum. Officials deported him to Havana after five months, citing the Mexican constitution, which allows the government to expel “any foreigner whose remaining he may deem inexpedient.”

From Cuba, Agostini took a steamship to New York and then walked 370 miles to Montreal, where he got a chilly reception. “The cold climate of New France seemed to have congealed the heart of its inhabitants,” the hermit wrote in his journal. “My ragged clothes and mean appearance did not appeal to the Canadians.” His lack of French also made it hard for him to explain to the Quebecois why he looked and lived the way he did. “They distrusted me and ran away from me. It was the saddest period of my life.”

After weighing the idea of going back to Italy, Agostini decided to explore the American West. When he joined a wagon train in Council Grove, Kansas, in August 1863, the Kansas City Times reported that the old monk refused to ride in the wagons and wouldn’t sleep in a tent. Instead, he walked alongside the wagons and at night wrapped himself up in a coarse blanket to sleep under the stars.

Arriving in New Mexico, a newly annexed U.S. territory, Agostini settled into his cave and practiced his daily devotions. Each Sunday, he walked to Las Vegas, New Mexico, for Mass. The Las Vegas Daily Optic reported that “people for miles about were so impressed with the religious character of the newcomer that they commenced making pilgrimages in large numbers to his lonely dwelling.” Visitors returned with stories about how the hermit had cured their ailments or made a spring appear by striking the earth with his staff.

The hermit was killed in 1869 in another part of New Mexico by unknown attackers and found with his crucifix in his hand, wearing a cilice—an ascetic’s spiked iron belt—that had been around his waist so long his skin had grown over it.

The hermit’s austere life and death are much in the thoughts of Joseph’s father, Victor Abeyta, as he makes his annual trek. The climb has been harder for him since he was hit by a car in 2004—he now has several metal plates and pins in the lower half of his body.

“We’re still able to come to this place and use it like they did,” he says, surveying the view from the top. “And I’m fortunate enough to still be able to do it.” 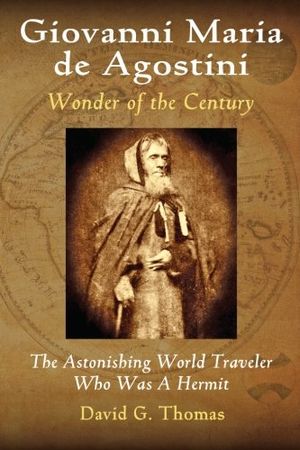 Giovanni Maria de Agostini, Wonder of the Century: The Astonishing World Traveler Who Was a Hermit

Agostini is remembered in many places, and his life story is encrusted with myth and false fact. As Thomas unveils the veritable events of the monk's life, a man of fascinating originality and prodigious endurance, infused with an indomitable spirit of adventure, emerges.

Gabriel Ellison-Scowcroft is a photographer, writer and radio producer whose work has appeared in the New York Times and the Globe and Mail, among others.