Sue Canterbury, a curator at the Dallas Museum of Art, was visiting a collector when she noticed a dramatic painting of a lighthouse. The brushwork seemed familiar, yet the composition was wholly original. “I’m standing across the room thinking, ‘Who is that?’” It was Ida O’Keeffe (1889-1961), once considered by her family to be more talented than her eldest sister, Georgia, one of the biggest names in 20th-century art. Ida reportedly grumbled that she’d be famous, too, if she had a Stieglitz. Alfred Stieglitz, the legendary photographer, was Georgia’s husband, patron and gallerist. Ida, by contrast, supported herself as a nurse and teacher, painting about 70 known canvases in her life. Canterbury’s rediscovery led to an extensive hunt for Ida’s work and a major exhibition that raises tantalizing questions about all the gifted women overlooked in an era when so few were given a chance. “Could she have been on the level of Georgia?” Canterbury asks. “That will have to remain unanswered.” 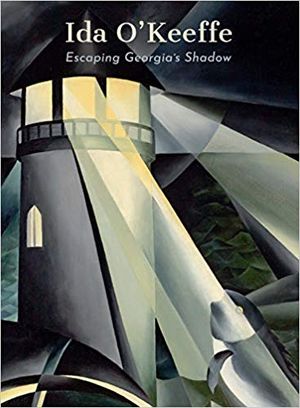 This is the first publication devoted to Ida Ten Eyck O’Keeffe (1889–1961), the younger sister of Georgia O’Keeffe. This volume illustrates works by Ida and examines their merits as well as their place within the aesthetics of American Modernism during the 1920s and 1930s.