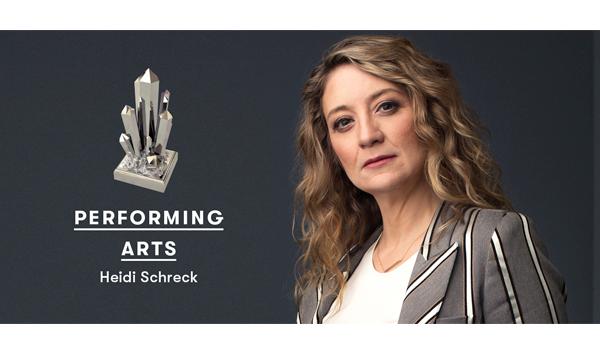 Heidi Schreck encourages a wider view of American justice in her surprising drama What the Constitution Means to Me. Celeste Sloman

Spend some money on your way out of a Broadway theater and you can leave with an overpriced mug or T-shirt. Heidi Schreck sent people home from her show with a souvenir that is arguably much more valuable, and at no charge: a pocket-size copy of the United States Constitution.

Anyone who saw Schreck’s play, What the Constitution Means to Me, during its five-month Broadway run or on one of its tour stops will surely never think of the country’s founding document the same way again.

If the play’s title sounds like something from a high school speech contest, there’s a reason for that: It was born of Schreck’s experiences as a teenager at Wenatchee High School in Washington in the 1980s, when she competed in American Legion oratorical contests. She won enough money doing so to pay for college at the University of Oregon.

In the play, Schreck, who both wrote and starred in it, wryly recreates what she has described as her “teenage girl’s bad romance with the Constitution.” From that rather adorable premise she embarks on a far-reaching examination of how the Constitution has applied—or not applied—to several generations of women in her family.

She talks about the marginalization of women and other demographic groups, about domestic violence and sexual abuse. She calls out the founders and later interpreters of the Constitution for their male-centric view of the world, in her groundbreaking analysis of what she sees as a living document that can evolve with our times.

Schreck began working on the play in 2007, when she was living in Brooklyn, and performed a brief monologue at P.S. 122, an alternative-theater space in Manhattan’s East Village, about her teenage debating experiences. “I really started from the tiny spark that so many plays start from,” she told me in an interview this past September, shortly after the play closed on Broadway and was beginning a run at the Kennedy Center in Washington, D.C. “I certainly didn’t have a grand idea.”

Encouraged by the response to her initial effort, she set about expanding the piece. It was when she posed herself the challenge that her 15-year-old self was given during those contests—find a personal connection between her life and the Constitution—that the work grew into a kind of feminist deconstruction of the nation’s founding document. (Schreck’s earlier work, Grand Concourse, featuring a soup kitchen in the Bronx as its setting, garnered a Lilly Award in 2015 for best new play; she is also a screenwriter whose credits include the television series “Nurse Jackie” and “I Love Dick.”)

What the Constitution Means “sort of took its own shape,” she said. “I felt as if the play led me.” Schreck, who was briefly on a prelaw track in college before English and theater swept her away, turned herself into something of a constitutional expert, taking a deep dive into the mind-set of the men who wrote the Constitution, who was left out of it and how it has been shaped over time. In the play, she talks quite a bit about the Ninth Amendment, which says simply, “The enumeration in the Constitution, of certain rights, shall not be construed to deny or disparage others retained by the people.” Or, as she puts it onstage, the Constitution doesn’t guarantee you the right to brush your teeth, but that doesn’t mean you don’t have that right. (The Ninth Amendment has helped secure, for instance, the right to use birth control.)

She enlarges, too, on the concept of negative rights versus positive rights—things that the government is expressly forbidden to infringe upon versus things that are proactively guaranteed. She studied up on the constitutions of other nations that have a greater emphasis on positive rights than does the U.S. Constitution. South Africa, for instance, guarantees the right to human dignity, and to a healthy environment.

“These constitutions,” she said in an interview, “I find the language around human rights in them inspiring.”

Schreck performed the longer version of the play in 2017 at the Clubbed Thumb theater company, also in the East Village. From there it gathered momentum, with runs at Berkeley Repertory Theatre in California and New York Theatre Workshop. Performing in a small venue is one thing; telling a very personal story to almost 600 ticket holders per show, which she did for 169 performances at the Helen Hayes Theater on Broadway, was an adjustment.

“I didn’t imagine the level of exposure,” she said. Talking about her sex life, her abortion, her family’s unsettling history in front of that many strangers was nerve-racking. So was performing the play when one particular person—her mother, Sherry Chastain Schreck—was in the audience for the first time. It was opening night on Broadway. “The first performance was hard—my mother was very emotional, I was very emotional,” Schreck recalled. But, she added, Mom went back several times.

The response from the audience also helped her get through the discomfort, as she realized her tale was resonating. “The biggest thing,” she said, “which I guess shouldn’t have surprised me, is that people like to stay and tell me about their own stories—a lot of people saying, ‘This reminds me of my family,’ or talking about their own relationship just to being a person in this country.”

On Broadway, where foreign tourists make up a significant part of the audience, she was often surprised at the ways in which a play about America’s founding document spoke to them. “I’ve talked to people from Japan, from Germany, Australia, Canada,” she said. “They’ve said, ‘It makes me want to look at our constitution.’ I had two Japanese women who told me, ‘We struggle with all of this in our country.’”

And then there’s that freebie Schreck included with the program. “People are so excited about receiving their Constitution,” she said.

Schreck may have thought the Broadway run was the pinnacle for the play, but the engagement at the Kennedy Center—with roughly twice as many seats as the Hayes—was a new kind of high. At the end of the play, Schreck brings a high school student (Rosdely Ciprian in the Washington production) onto the stage to debate her as to whether the Constitution should be scrapped entirely. Both of them felt a crackle in the air at the Kennedy Center.

“The debate was more electrifying than it has ever been,” Schreck said. “Both she and I realized that we were posing these questions about reimagining what our country might be before people who might actually have decision-making power.”

What if Schreck were to convene a real constitutional convention to consider mending some of the document’s flaws? What would she focus on?

“I would put the explicit protection of human rights on the agenda,” she said. Then she added emphatically, “I would certainly put the Equal Rights Amendment on there.”

Neil Genzlinger is a critic who frequently writes for the New York Times.