One day in 1963, a movie producer named Larry Turman came across a first novel by a young Californian. “It had an emotional coloration for me like Harold Pinter,” he says. “The book was funny, but it made you nervous at the same time.” So Turman, now 91 and teaching in the University of Southern California’s film and television program, did something he advises his students never to do: He put up his own money, $1,000, to option the movie rights.

Turman’s impulse buy led to one of the most consequential films ever: The Graduate, released in December 1967. Its success—a gross of almost $105 million, the third-highest at the time—revolutionized Hollywood decision-making over which movies got made, how they were cast and to whom they were marketed. Today, the film seems as subversive as it was 50 years ago, just in different ways.

In the novel, also titled The Graduate, author Charles Webb looks back in anger at the gilded California lifestyle he had as the son of a Pasadena cardiologist. He was only 24 when he published it, and yet the book gave the film not just its main plot points—the graduate’s homecoming, his seduction by Mrs. Robinson, his pursuit of her daughter, Elaine—but also much of its best dialogue.

In grand Hollywood tradition, the film “almost didn’t get made,” says Turman. “Nobody liked the book.” His fitful search for financing led him to Joseph E. Levine (“the schlockmeister of the world,” Turman says), who put up $3 million. For a director Turman went after Mike Nichols, whose recently dissolved stand-up act with Elaine May had the same mordant streak as the book. Nichols was directing Robert Redford in the Broadway megahit Barefoot in the Park, but after Turman sent him the book, he signed on. Nichols found his screenwriter at a July Fourth pig roast at the Malibu home of Jane Fonda and her husband-to-be, the director Roger Vadim. The 1965 party has become legendary for its somewhat awkward mingling of Old Hollywood icons (Henry Fonda, William Wyler, George Cukor) with the talent that would shortly emerge as the New Hollywood (Jack Nicholson, Dennis Hopper, Jane Fonda’s brother, Peter). Somewhere between the spitted pig and the tented dance floor Nichols encountered Buck Henry, who was writing for the TV spy spoof “Get Smart,” though Henry ended up sharing credit for The Graduate with Calder Willingham, who’d written a failed first script.

In casting the leading man—Benjamin Braddock, described in the book as tall and athletic—Team Turman took its biggest risk. They passed over Redford (“Who’s going to believe Bob Redford as being sexually insecure?” Turman asks) for an unheralded, height-challenged 29-year-old Dustin Hoffman. Nichols and Henry had seen him in a small stage production of Harry, Noon and Night in New York, and Henry said Hoffman “played a crippled German transvestite, and I believed all three, no question.”

Years later, Hoffman recalled telling Nichols, “The character is five-eleven, a track star....It feels like this is a dirty trick, sir.” The director replied, “You mean you’re Jewish, that’s why you don’t think you’re right. Maybe he’s Jewish inside.” More seriously, Nichols, who was also Jewish, later said the casting of Hoffman emphasized Benjamin’s alienation from the WASP world around him. A next-generation director, Steven Soderbergh, said the choice was “the seminal event in the defining of motion picture leading men in the last 50 years.” 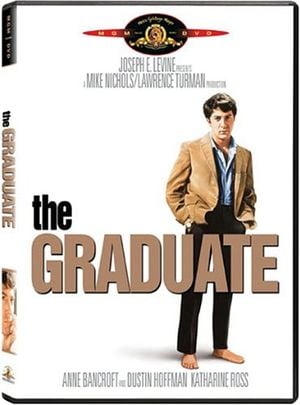 Pulsating with the rebellious spirit of the '60s and a haunting score sung by Simon and Garfunkel, The Graduate is truly a "landmark film" (Leonard Maltin).

Turman also cast against type for Mrs. Robinson. “I wanted Doris Day,” for her all-American image, he says. But she passed, so he signed Anne Bancroft, who’d won an Oscar in 1962 as the saintly Anne Sullivan in The Miracle Worker. And for Elaine Robinson, he enlisted Katharine Ross—a brunette, not a California blonde.

Simon & Garfunkel had signed on to write three songs for the film but were too busy to deliver. The editing team inserted “Sound of Silence” and “Scarborough Fair” as placeholders—and left them there. One song was new, though at Nichols’ suggestion Simon made a change: What was to have been a toast to “Mrs. Roosevelt” became “Here’s to you, Mrs. Robinson.” The song became a Number 1 hit in June 1968.

Before The Graduate, film historian Mark Harris has noted, the studios believed “everything should appeal to everyone.” After the film filled theaters for two years, they realized “almost half their paying audience was under 24.” Soon James Bond and John Wayne gave way to Ratso Rizzo and Al Pacino.

The Graduate won an Oscar, for Nichols’ direction, though critical reaction was vehemently mixed. However, a retrospective viewing by Roger Ebert shows that the film is rich enough to be read differently across time. At first he, like most boomer males, got a jolt out of Benjamin’s flight from the Establishment. But for the film’s 30th anniversary, he wrote this: “Here is to you, Mrs. Robinson. You’ve survived your defeat at the hands of that insufferable creep, Benjamin, and emerged as the most sympathetic and intelligent character in The Graduate. How could I ever have thought otherwise?”

The Ascent of Ma’am

Mrs. Robinson had few predecessors but a legion of successors. Here’s a sample of post-Graduate women who pursue younger men onscreen.

79-year-old gets death-obsessed 20-year-old to lighten up.

A woman of middle age is stunned to discover her boyfriend is 17.

A mom and her teen son’s friend find each other on prom night.

Woman on the run stops long enough to entertain a young drifter.

Claire Peterson (Jennifer Lopez) in The Boy Next Door (2015)

Teacher meets neighbor and soon longs for a change of address.

Alec Scott is a journalist based in San Francisco. He’s written for several publications including the Los Angeles Times and the Guardian.