On a summer’s day in 1914, internationally acclaimed author Edith Wharton went to an affluent friend’s for tea. Life in Paris was easy for the wealthy 52-year-old and her friends, who brought society’s upper crust with them wherever they traveled. A year earlier, Wharton, newly divorced and in search of something new, had decided to make the city—one of her favorite destinations—home.

But the relaxation of that afternoon tea party didn’t last. “As we sat there a cloud-shadow swept over us, abruptly darkening bright flowers and bright dresses,” she later recalled. The summer day had suddenly turned forbidding with news of the assassination of Archduke Franz Ferdinand. A few days later, Germany declared war on France—and suddenly Wharton was an expat near the front lines of a full-blown world war.

Many of her friends left when the war began, but Wharton stayed put. She decided to chronicle the effects of the war in reportage for Scribner’s Magazine. But most of her time in Paris was dedicated to aiding refugees—and though her humanitarian work is largely forgotten today, she helped bring the world’s attention to the horrors of displacement.

Millions of Europeans were on the move, fleeing the Germans and Russians as their own armies retreated. As hundreds of thousands of Belgian refugees poured into France and Britain, a humanitarian crisis unfolded—one that keenly touched Wharton.

In response, she started two refugee charities, established dressmaking workshops for unemployed seamstresses around Paris, and was one of the few foreigners allowed to visit the front. But the constant pressure to raise funds weighed on her more than the dangers of being near the line of fire.

And so Wharton did what she did best: She published a book. “Moved by the urgency of need for money with which to carry on the work through the coming year,” she reached out to dozens of the most prominent writers and artists of the day. Their contributions would become The Book of the Homeless, published in 1916, the proceeds of which benefited Wharton’s charities.

There was precedent for the book during the war. In 1914, King Albert’s Book paid homage to the battered King Albert I, whose neutral country was invaded by the Germans on their way to France. Wharton contributed to it along with other European literati and wrote for another anthology, The Queen’s Gift Book. Both were published by British publishing house Hodder & Stoughton. Each sent much-needed funds to convalescence homes for recovering veterans.

Famous and well-connected, Wharton adopted this model and reached out to friends. Most people she asked agreed immediately to participate. Pierre-August Renoir donated a portrait of his son, who had been wounded in the war. Igor Stravinsky donated musical scores; Claude Monet a drawing. She enlisted Henry James to help solicit more contributors, and he got yesses from Thomas Hardy, William Dean Howells, and John Singer Sargent.

There were a few noteworthy refusals, like Joseph Conrad, who, according to James, wrote “at the rate of about a word a month.” Rudyard Kipling also refused, claiming he was too busy. But most said yes, including Sarah Bernhardt, Rupert Brooke, Jean Cocteau, John Galsworthy and George Santayana, who wrote poems, stories and essays about the war’s devastating effects.

Wharton’s publisher, Charles Scribner, assented enthusiastically to the idea, pledging to comp all advertising and commission fees. Meanwhile, more contributors signed on. William Butler Yeats sent in a contribution, apologizing for the poem’s brevity. But there were hiccups. Robert Grant sent in an essay that was deemed too “partisan” in its support of President Wilson, who hadn’t yet joined the war. “I can’t tell you with what a contraction of the heart we Americans over here read of Newport balls and tennis tournaments and of President Wilson’s meditations,” Wharton scolded. And one contribution by Andre Suares was edited so would not be “too Lesbian for publication.”

The question of who would write the introduction raised more problems. Wharton wanted Theodore Roosevelt; Scribner was wary, worried Roosevelt’s strident positions on American intervention would make the book too controversial. As Scribner feared, the former president wasn’t shy about his feelings on America’s refusal to fight. “The part that America has played in this great tragedy is not an exalted part,” he wrote in the introduction. But though Scribner worried that including it would alienate Wilson’s supporters, Wharton insisted. Faced with deadline pressure, Scribner relented and included Roosevelt’s introduction in the book.

Wharton was intent on publishing The Book of the Homeless right before Christmas, just a few months after she proposed the idea. She also came up with a way to raise additional funds: an auction of the original versions of the works included. She asked the writers to send in handwritten versions of their pieces, telling Roosevelt that at least one “Tru-Fool” would relish a chance to own his handwriting. “We even hope to find two or three and pit them against each other,” she wrote, anticipating a heated auction.

Despite her best efforts, The Book of the Homeless published in January, too late for Christmas gift sales. But Wharton had gathered 57 contributions from most of the important figures in the arts. All 500 of the deluxe edition sold immediately at a price of $50 (about $2000 in today’s dollars), and half of the less expensive print run had sold out by April. That spring, Scribner sent Wharton a check for the equivalent of about $24,000. The auction brought in 25 times as much. 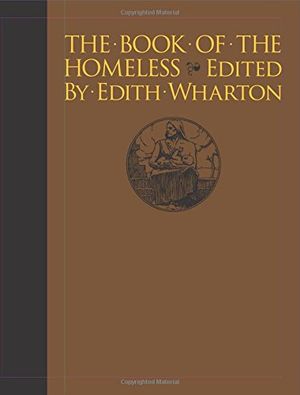 The Book of the Homeless: (Le Livre des Sans-Foyer)

In the course of fund-raising for civilian victims of World War I, Edith Wharton assembled this monumental benefit volume by drawing upon her connections to the era's leading authors and artists.

The book was well-received: The New York Times noted how tirelessly Wharton had been working for the refugee cause. “It can honestly be said that seldom has such a galaxy of first-rate authors, French, Belgian, British, and American, been brought together in one volume,” the Times Literary Supplement gushed. And the people of France showed their appreciation, too, awarding her the Legion of Honor in 1916.

Today, the book is a fascinating who’s who and a document of artistic activism. One contribution stands out: William Butler Yeats’ “On Being Asked for A War Poem.” Only six lines long, the poem is simultaneously a critique and endorsement of Wharton’s project:

I think it better that in times like these

A poet's mouth be silent, for in truth

We have no gift to set a statesman right;

He has had enough of meddling who can please

A young girl in the indolence of her youth,

Or an old man upon a winter’s night.

“I am very proud when I look back on the last year and find that I have collected [about $2.4 million] for my two refugee charities, workroom and the Red Cross,” wrote Wharton. “But, oh, I’m tired.”

Tired or not, Wharton’s creative endeavors were far from over. She remained in France for the rest of her life, publishing her Pulitzer-Prize winning The Age of Innocence in 1920. Wharton may be better known for her fiction, but the legacy of her work for refugees—and The Book of the Homeless—continues. Copies of the deluxe first edition can sell for as high as $4,500 at auction, but the book is more than a souvenir: It’s a testament to how writers and artists can come together to help those in need.