Mediterranean cuisines are more than olive oil, pasta and rough red wine. They combine foods that have been grown, gathered, hunted or herded since the dawn of civilization, with ingredients and techniques imported from around the globe during more than two millennia of exploration, trade and conquest. Mediterranean dishes can be as simple as boiled mutton or grilled fish, or as complex as the long historical gavotte of cultural advance, embrace and retreat that formed the character of this region's many lands.

The culinary history of the Mediterranean Basin is a big topic, and food writer Clifford Wright has written a big book. More than 800 pages long, A Mediterranean Feast lists more than 500 recipes and includes dozens of boxed asides describing particular ingredients, dishes and regional styles of cooking. It examines foods from every region bordering the Mediterranean and from that sea's principal islands; foods grown in the soil and foods taken from the water. It looks at food as sustenance—caloric fuel for those who work the land — and foods that, through their distinctive combinations of ingredients, flavorings and cooking techniques, exemplify regional cuisines. It considers how terrain and climate influenced Mediterranean diets, and reviews the centuries-long history of cultural and economic exchange that produced the cuisines that travelers in the region encounter today.

This is far too much territory for any book to cover in depth. Still, this volume offers a fine overview of the history, culture and character of Mediterranean food and cooking. Wright develops his discussion around three general themes. First, he argues that many of the features defining Mediterranean cuisines result from their development in a landscape "of poverty and destitution." Second, he emphasizes the significance of Islamic cuisines on the culinary history of the region. Finally, he presents a selection of recipes that reflects both the distinctive characters of the area's diverse regional cuisines and the common features that link these cuisines into a coherent Mediterranean whole.

Was life in the lands around the Mediterranean Sea really as wretched during the past thousand years as Wright implies? There were certainly episodes of famine and plague, and the region's great empires and splendid cities did rest on an underclass of impoverished farmers, fishermen and herders. But the worst thing about most people's fare — particularly in the lands of southern Europe — was probably the lack of day-to-day variety. 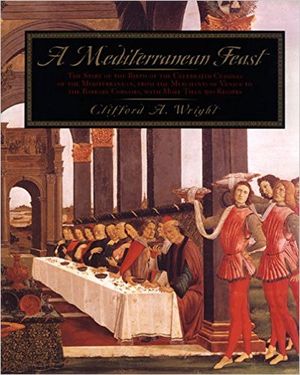 The Story of the Birth of the Celebrated Cuisines of the Mediterranean from the Merchants of Venice to the Barbary Corsairs, with More than 500 Recipes.

Before Columbus reached the West Indies, the Old World had no corn, squash, tomatoes, potatoes or peppers. Anything that wasn't eaten fresh had to be dried, smoked, salted, fermented or pickled. Few households had ovens, and spices like saffron, pepper and cinnamon were too expensive for any but the rich. People ate what was in season, what they could preserve, and most of all, what they could afford.

In southern Europe, people ate cabbage. They ate olives and cheese, ham and salted fish. They ate soups and stews flavored with garlic and onions, gnawed on coarse breads and slurped bowls of thick gruel. They had spinach and chard and beets from their household gardens, turnips in the wintertime and whatever greens and mushrooms they could gather in the wild. When they had fresh meat, they ate it grilled or boiled, and when they butchered an animal, they used everything except the squeal. Spices were indeed a luxury, as were rice and white bread. Most Mediterranean people were peasants, and they ate peasant food.

Wright's recipes emphasize this heritage. The first recipe he prints is for cabbage soup. He gives us recipes for chickpea and tripe stew (from Andalusia, in southern Spain), a salad of sliced duck gizzard and greens (from the Languedoc region of southwestern France), and a northern Italian dish of polenta (fried corn mush) and small birds. He tells us how to make sausage and lists six dishes featuring salt cod. Although hardly elegant, this is still savory stuff, particularly with the addition of a bit of black pepper and some New World tomatoes. Such recipes also show how many ingredients we regard as luxuries — mesclun greens and wild mushrooms, prosciutto and pine nuts, good olive oil and parmesan cheese — added flavor and variety to the food on peasants' plates.

The foods of southern Europe are only one part of Wright's book. Islamic civilization brought couscous and cinnamon, citrus and sumac, eggplant and artichokes to the Mediterranean feast, along with practices like sweetening food with sugar, coloring it with saffron and flavoring it with pomegranate juice, rose water or almonds. Yogurt and stuffed vegetables arrived by way of the Middle East, along with kabobs and pilaf-style steamed rice. The author's discussion of the cuisines of North Africa, Egypt and the Arab Levant will be particularly interesting to readers who, like me, tend to think "Italy" when we hear a mention of Mediterranean foods.

Wright is particularly adept at showing how such foods, and their associated styles of cooking, were moved around the Mediterranean by migration and trade. Gyros and stuffed grape leaves came to Greece from Turkey, and dishes like spinach with raisins and pine nuts, almond and saffron soup, and a flavorful mix of rice and beans called "Moors and Christians" reveal the Muslim presence in medieval Spain. And in honor of Sicily's location at the nexus of this Mediterranean exchange, the book includes more than three dozen recipes from that rocky island.

At first glance, this book seems a jumble of topics, traditions, tastes and techniques. Broad reviews of political and economic history are interspersed with discussions of topics like shipbuilding, irrigation, spices and the Mediterranean grain trade. Recipes for seafood, lamb, pasta and vegetables are scattered throughout the book; recipes from different regions are shuffled together like a deck of cards. But two good indexes — one of general topics, the other of recipes — guide readers through the confusion; the recipes I tested were very good. Wright's enthusiastic investigation of Mediterranean cuisines is a fine feast for readers interested in culture, history, and most of all, food.