Chris Stein was at the center of the burgeoning punk/new wave scene in 1970s New York City as the lead guitarist for Blondie. Cutting edge bands such as Talking Heads, the Ramones and Television were establishing their sound at clubs like the now-defunct CBGB. And as a member of one of the leading groups on the scene and a recent photography graduate of New York’s School of Visual Arts, Stein was uniquely positioned to document the musical pioneers of that time and place.

After attending art school in the late 1960s, Stein was drawn to a fertile downtown music scene of New York City. Sonically creative as well as visually, he met his musical soulmate Debbie Harry in the short-lived glam punk band The Stilettos. Following that group’s demise, Stein and Harry went on the form Blondie in 1974, with Debbie Harry serving as the group’s sultry frontwoman. They’d achieve their first commercial success by their third album, Parallel Lines, in 1978, thanks to their ethereal disco-tinged hit single, “Heart of Glass.”

The rising new wave/punk scene of that time provided ample subject matter for Stein’s lens. He had special access to his fellow musicians, shooting portraits of performers including Joey Ramone, Iggy Pop, Joan Jett and of course, Debbie Harry. And many weren’t just colleagues–they were his friends. “There was a glamour in the decay that we were all in…you look back at the rot and decay with a sort of envy,” Stein told the Los Angeles Times. He used a kitchen that he shared with Harry in New York as a makeshift dark room to develop these photos.

To commemorate the 40th anniversary of Blondie, Chris Stein is releasing his treasure trove of his photographs from the New York City music scene of the 1970s and early 1980s in his new book, Chris Stein/Negative: Me, Blondie, and the Advent of Punk. 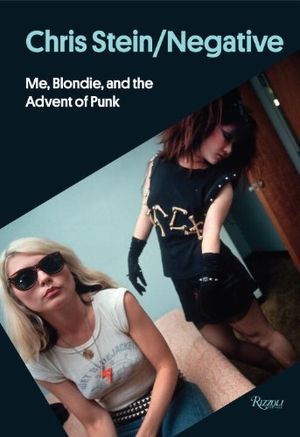 Chris Stein / Negative: Me, Blondie, and the Advent of Punk

I caught up with Stein via email just before he left on Blondie’s European tour to support their new record, Ghosts of Download.

I’ve read that you were serious about visually recording what was going on during the early days of Blondie. Was that because you had a sense that something special was happening?

I don’t know how ‘serious’ I was, but there was an immediacy to everything with little view of the future. We are now frequently asked about any views we might have then had about still working many years in the future; I think everyone was very much ‘in the moment.’

How did you find time to shoot in between practice, songwriting and gig obligations?

Maybe a little selectivity. I often would choose between bringing a camera or just being involved with whatever I was doing. Unlike today’s climate of mass recording of everything I would usually choose to watch a concert rather than photograph at it.

You ended up having access to famous people before they became famous. Who did you enjoy photographing the most, and why?

I don’t know if I had any preferences. I of course always liked photographing Debbie. I wish I had a camera when we met Liz Taylor. In retrospect I’m glad I have images of Andy [Warhol], [William] Burroughs, the Ramones, etc.

How do you think your interest in photography influenced your songwriting style, and vice versa?

Maybe there is a similar relationship between the audience and the photographer/musician, though the effects probably react on different aspects of perception. I think visual and auditory stimuli are, as the hippies used to say, “the same but different.” Directly, being in the midst of the music scene, I just was excited to capture images from it. Early on, people did see images of Debbie before they heard the music.

Ever get any regrets that you became a rock star and didn’t become a professional photographer, in the traditional sense?

As Glenn O’Brien writes in my book, “Everyone was multitasking; had several ‘jobs.’”

Who are some of your visual influences?

As far as photographers go, I am enamored of [Diane] Arbus, Weegee, etc.­–the ones that were able to impose their personal psychology on the viewer and the subject of the picture.

You’re stranded on a desert island that happens to have a working record player. What are the three albums you bring with you?

Well this posits that I would be listening to the same hour and a half of audio for all eternity more or less so it’s a tough call. Maybe things that are less defined and song like and are layered and ambient like Moondog, Metal Machine Music and [Richard] Wagner’s greatest hits.