As if her eccentric vocals and style of dress weren’t futuristic enough, the Icelandic pop star Björk cast herself as a freshly assembled android in her classic hit video “All Is Full of Love.” The video, part of a major Björk retrospective opening March 8 at the Museum of Modern Art in New York, climaxes with Björk passionately kissing another android, a moment that is simultaneously intriguing and discomforting. “Love is seen as the most human emotion in Western cultures, and not something you would associate with technology,” says musicologist Nicola Dibben, who has collaborated with Björk on other projects. In the wake of recent advances in affective computing and social robotics, thinkers such as Stephen Hawking and Elon Musk have warned of the dangers of advanced artificial intelligence. They fear a rise of the machines. But Björk’s video shows a subtler takeover. Robot love could slowly erode what makes us human.

Through her many albums, Björk explores various aspects of technology— music technology, the challenges of keeping up with new technology, the feminization of technology and the relationship between music, nature and technology. The latter was a major component of Biophilia, the first ever app-album, which allows listeners to contribute to the music experience by playing with interactive on-screen visuals. In a 2011 interview with the Atlantic, Björk says of her concept album, “I wanted to map out on a touchscreen how I experience musicology and then write with it. The most natural way for me was to compare it to elements in nature. So shapes of songs are like crystals, arrangements multiply like viruses, chords are like strata in tectonic plates, rhythm like DNA replicates, arpeggios like lightning and so on…” Biophilia is also the first downloadable app to join MoMA’s permanent collection.

The exhibition goes through June 7, and along with music videos, it features album art, instruments, photography from concerts and costumes, including the infamous swan dress Björk wore to the 2001 Academy Awards. Through visuals and sounds, the exhibition takes viewers through Björk’s career, beginning with the release of her solo album, Debut, in 1993 to her work in 2015 with a video and music installation, Black Lake, which was commissioned for the museum and part of her new album, Vulnicura. “Björk is more than just a musician,” Dibben says. “She and her team are creative entrepreneurs and innovators. It’s important that this exhibition displays the wealth of the richness of her work.” 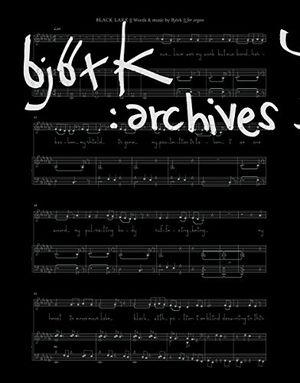