In 1942 Archie Comics introduced the gang at Riverdale High School—Archie, the klutzy redhead; Jughead, the goofy sidekick; and Betty and Veronica, frenemies to the death—and for more than 60 years none of them aged, or even graduated. Storylines repeated, gags were recycled. The country marched ahead, but the tidy fictional suburb barely noticed. When a shaggy-haired interloper appeared in a late ’60s strip, a perplexed Betty mused, “He doesn’t even have a dime for a haircut!!”

The original teenage gang couldn’t stay cloistered forever, though. Kevin Keller, a gay character, was introduced in 2010. Zombies invaded Riverdale in 2013’s Afterlife with Archie. In a revamped Archie #1 last year, the kids got cellphones, suitors of all races and PG-13 hookup-era dilemmas.

Now comes the classic’s trickiest makeover with a new Betty & Veronica #1 this July. The old Betty and Veronica, of course, spent all their time scheming to get Archie’s attention, at the expense of any decency or personal ambition. But feminine wiles on that scale don’t fly in the age of girl empowerment. So how will the girls remain true to themselves and yet time-travel to 2016?

They all seem so familiar to us today, but there was really no conception of “teenager” before Archie. The word came into use around the same time as the comic and evoked a mischievous yet harmless creature of the American future. Two years after a former newspaperman named John Goldwater and a teenage artist named Bob Montana created the comic in New York City, it was carried in 800 newspapers, and the books consistently sold about a half-million copies a month—more than Superman. Then, as now, its followers were not primarily teenagers but what we call tweens, for whom boy-girl stuff was still somewhat theoretical. And unlike superhero comics, Archie was popular among girls.

If the comic were a field guide to teenage-dom, what did Betty and Veronica teach these girls? At best they are complementary archetypes, saucy and sweet, like Ginger and Mary Ann. At worst they are poison to the developing female mind. For decades, all those two ever did was “accidentally” spill lemonade on each other’s dresses. The duo conveyed that being an American teenage girl meant being a boy-crazy aspiring pinup who hated her best friend.

The new Archie doesn’t entirely ditch this gag. Veronica was once the richer, sexier, more cosmopolitan girl every teenager secretly wanted to be; in the reboot she has tipped trashy, while Betty is a tomboy with big dreams. (The writer, Adam Hughes, has admitted he’s on “Team Betty, all the way.”)

More significantly, the two are now rivals in the fight to save Pop’s Chocklit Shoppe, the gang’s eternal hangout, which is being threatened by a soulless corporate chain. And what’s at stake in their competition isn’t Archie’s affections but their friendship. Whatever the outcome, the broader message is that the modern teenage girl cares about her community, fights for what she believes in and worries about her female friends. For a franchise so resistant to change, that’s a respectable feminist pose. And it turns Archie back into what it’s always been—a mirror for mainstream sensibility.

The idea that Betty and Veronica truly cared about boring old Archie was always comically implausible. The real chemistry, and all the fun, happened between the two girls. The comedian Lena Dunham confessed a couple of years ago that she was a lifelong fan girl, and announced a deal to write a four-part Archie series. Fellow fans immediately suggested she make Betty and Veronica lesbians. That wasn’t for sexual thrills, I believe. Fans were simply expressing what they’d known all along: Our titular hero was irrelevant. The girls were going to take over Riverdale all along. They just had to wait until the time was right. 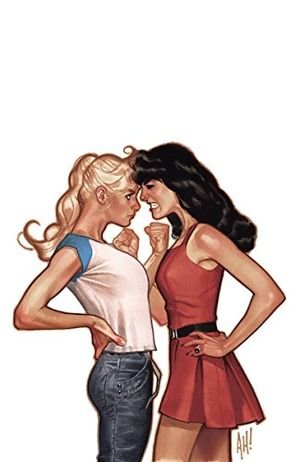 Hanna Rosin is the co-host of NPR’s behavioral science program “Invisibilia” and the author of The End of Men. She is a contributor at The Atlantic and is the founder of Slate’s DoubleX section.