You don’t have to follow the world of professional dance to know Misty Copeland. These days, the prima ballerina is becoming a household name, and it’s not just because she dispelled any myths regarding the athleticism of dance in her viral commercial for Under Armour.

She’s been on the path to stardom since she discovered ballet at age 13 (unusually late for a professional dancer), but her celebrity was solidified in 2015 when she became the first African-American woman to be promoted to principal dancer at the American Ballet Theatre. And she’s been on a roll, or rather, a grand jeté ever since.

Continuing her push to boost diversity in ballet, Copeland partnered with Justin Peck, soloist and choreographer at the New York City Ballet, to curate “Ballet Across America,” a program highlighting diversity and innovation in ballet at the Kennedy Center in Washington, D.C. this April. Following the opening night ceremony on April 17, each night, for six nights, three ballet companies will perform. The first three evenings feature Copeland’s selected companies and the following three feature Peck’s.

Smithsonian.com spoke with Copeland about the show, how Prince shaped her art and what she would be doing if she were not a dancer.

What is “Ballet Across America” all about?

It’s amazing, I think, at this point in my career to be able to be a part of something that can truly represent American dance in a very inclusive way. And I feel like that’s what the Kennedy Center has allowed Justin Peck and I to do—to really bring our diversity, our different opinions and maybe views on what we think is necessary to have representation for American dance. So, it’s really an opportunity over the course of a week for different companies to come together and perform at the Kennedy Center, have discussions with different choreographers and artistic directors, and also hear from me and Justin Peck, as well.

What do you hope people who attend take away from the program?

I hope they become fans of the companies that we are presenting. We were allowed to pretty much just have free reign and suggest companies that we wanted to have the Kennedy Center audience be able to see. When I was going through that process of deciding what companies, I really wanted to give an opportunity to people who maybe have never performed at the Kennedy Center. For the most part, that space is really open to the bigger companies throughout the world. So I thought it would be a great opportunity for me to give to smaller companies and more diverse companies. I have Nashville Ballet on my program, Complexions and the Black Iris Project.

And how did you select those three?

Again, I think just knowing people, having experience seeing the companies and knowing how passionate these companies are. And, again, I think the big thing is their widespread range of diversity when it comes to the background of dancers they have in their companies. But I, of course, had help from my manager Gilda Squire who I think has a great eye for discovering and pushing people. Jeremy McQueen from the Black Iris Project is one of the people that Gilda definitely brought to my attention and was pushing for. I really just [want] to give these companies and choreographers the opportunity to be seen by a broader audience.

In your opinion, what are three ballets everyone should see?

Oh wow. That’s hard. One very close to my heart, like it’s something I did very early on in my career at ABT and it’s still one of my favorites from the choreography standpoint and the music standpoint, is “Petite Mort,” which is contemporary work. Being in American Ballet Theater, we do full-length ballets. That’s the bulk of our rep. Maybe “Giselle.” Again, the whole thing from the music to the choreography to the costume to everything is done so incredibly well. Maybe a Forsythe ballet. I’m a huge fan of William Forsythe’s work. I don’t know, [maybe] “workwithinwork.”

Thinking back a few years to when you were first getting serious about dance as a teenager, who were your favorite dancers to watch, ballerinas or otherwise?

As soon as I learned what ballet was, my teacher was really big on showing me American dancers, and so, of course, a lot of them came through ABT. I grew up studying videos of [Mikhail] Baryshnikov and Gelsey Kirkland. But Paloma Herrera was the first dancer that I really felt this strong connection to. She was performing in “Don Quixote” with Angel Corella. It was the first ballet I ever saw live. I think I was 14 or 15, and they came to California to perform with ABT. I think Paloma was my everything when I was growing up and training.

What is one of the biggest misconceptions about ballet?

That it’s easy. That we are not athletes, therefore people assume that we can starve ourselves and just go up there and twirl around. I think what people don’t realize is that when we’re working as much as we do and training and dancing up to eight hours a day and performing in the evening, that there’s no way that we could actually function as athletes if we weren’t feeding and fueling our bodies. Also, that a ballerina can’t have brown skin. I think that’s another big misconception.

What are you listening to right now. What are some of your favorite tunes?

I’m a huge fan of James Blake. I know his last album came out last year, but he’s an artist who’s a go-to for me. I’m a big fan of J. Cole. I feel like in more recent albums he has such a relevant message when it comes to being black in America that’s very positive. I’ve also been listening to Solange’s most recent album, which I think is along those same lines. I feel like it’s such an appropriate time to have a positive voice as a black person in America today.

Can you think of another art form that is similar to dance?

I feel like there’s nothing that can be compared to dance. I really truly believe that. I think it’s one of the few art forms where you’re really using every part of your being. I guess as a musician you’re a performer, but I feel like a lot of musicians these days aren’t as much so. I think Lady Gaga and Beyoncé are some that give a full body experience performance. Musicians from back in the day used to do that. Prince is a big one. I feel like I would connect what he did with his art form to dance.

What was it like for you to work with Prince on his 2009 music video for “Crimson and Clover” and his “Welcome 2 America” tour?

Amazing. I feel like he helped create the artist I am today and just kind of opened my eyes to looking at things from a different perspective and a different way. It was absolutely incredible. I am so fortunate to have spent time with him.

Are you reading any interesting books right now?

The book that I’ve been reading so much of is my book Ballerina Body, that’s coming out soon. So much of the editing and everything. I feel like that’s on my mind when I do have a free moment to read.

What’s your definition of a “ballerina body,” since that’s the title of the book?

I don’t think there is a real true definition. I feel like the body is forever evolving, not just in ballet, but in the world. And it’s sad when people say, “A ballerina needs to look this way,” because when you look at the history, you see this array of ballet stars and they all come in such different packages. I feel like it’s being your healthiest and most fit self, not trying to be someone else. The whole theme of the book is creating your own version of the ballerina body.

Misty, if you were not a ballerina, what would you be?

What’s your favorite thing to cook?

I don’t have a favorite. I’m constantly trying out different recipes. I don’t eat red meat, pork or chicken, because I’m a pescatarian, but I’m so open to trying different types of food from different regions. I also bake, and I love sweets. So if you have a recipe to send over, I’d gladly try it out. 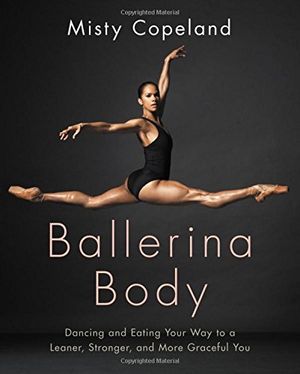 Ballerina Body: Dancing and Eating Your Way to a Leaner, Stronger, and More Graceful You