The Amazing Poster Art From the ‘Golden Age’ of Magic

An exhibition at the Art Gallery of Ontario shows how magicians enticed audiences with advertisements of levitations, decapitations and other deceptions 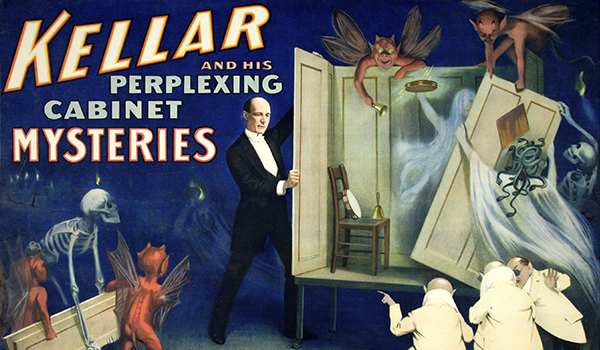 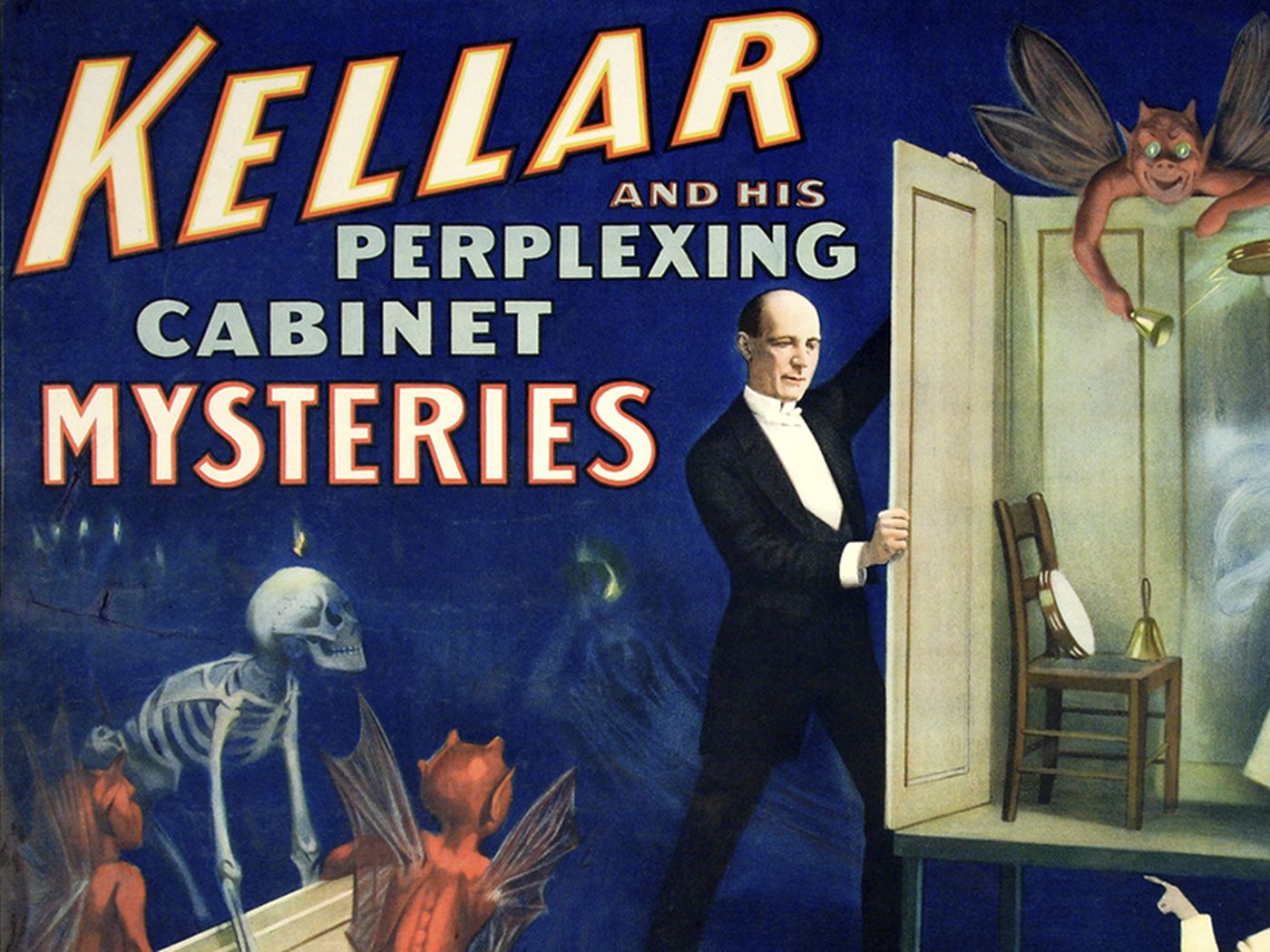 At the turn of the 20th century, magician Harry Kellar commissioned a poster to advertise one of his most famous tricks, “The Levitation of Princess Karnac,” in which he appeared to make a hypnotized woman—whom he claimed was a Hindu princess—hover in mid-air. The illustrated poster depicts Kellar dressed in a stiff tuxedo with his hands held above a floating, raven-haired woman. Two rows of little red devils bow at the magician’s feet, as though supplicating a supreme figure of dark and mysterious powers.

Though his name has been all but forgotten, Kellar was once a pioneering showman and global star. He staged big, lavish shows, during which fans might see him make live canaries disappear, or even decapitate himself. Posters were key to enticing audiences to his productions; they often show the magician conversing with devilish figures, as if in league with them—a promotional ploy that proved irresistible to Victorian audiences.

A selection of Kellar’s ads are among 58 historic magic posters on display at “Illusions: The Art of Magic,” a new exhibition at Toronto’s Art Gallery of Ontario. The show explores the fantastic feats and sensational showmanship of performers during magic’s “Golden Age”—a period that spanned roughly from the 1880s to the 1930s and saw magicians soar to unprecedented heights of international celebrity. Colorful and alluring, the posters are rife with headless figures, floating cards, crystal balls and big promises. “The greatest sensational mystery ever attempted in this or any other age!” declares an ad for Houdini’s Chinese water torture cell act. “The wonder show of the universe!” cries a poster flaunting a performance by Howard Thurston, who could seemingly make a car vanish into thin air.

“Imagine [seeing] these on billboards when you're walking in your town,” says David Ben, guest curator of the exhibition and a magician who performs on both stage and screen. Ben first became enthralled with magic when he was 12 years old, after his father gave him a magic handbook. He began studying the lives and careers of the performers who came before him, and today publishes a magic history journal. Looking around at the posters that line the AGO exhibition space, Ben admires his predecessors’ boldness.

“These guys were broad,” he says, puffing out his chest. “They played the room.”

A number of factors fueled the rise of superstar magicians in the late 19th century, including the burgeoning popularity of vaudeville in the late 1800s. Consisting of 10 to 15 short acts, these variety shows offered opportunities for “even a guy with a card act to become a star if he was skillful enough,” explains Houdini expert John Cox, author of the blog Wild About Harry.

“Houdini was a star of vaudeville,” Cox notes. “It wasn't until the end of his career that he even did a full evening magic show like we assume that he did…. Magicians played vaudeville, but a lot of them found it was more profitable to actually go out and tour on their own.”

With the growth of railway networks in America, along with the advent of steamships as a mode of international travel, intrepid performers took their acts across the country and beyond. For instance, Charles Joseph Carter, an American magician known by the stage name “Carter the Great,” embarked on eight world tours between 1900 and 1936, traveling largely in the Eastern Hemisphere—and taking 22 tons of equipment along with him. Carter’s time abroad inspired his persona; in one poster on view at the AGO, he is depicted in white safari gear, sitting astride a camel. The bottom of the ad promises that the magician “sweeps the secrets of the sphinx and marvels of the tomb of the old King Tut to the modern world.” Carter happened to share a last name with Howard Carter, who discovered the pharaoh’s tomb in 1922—and according to Ben, the magician was more than happy to capitalize on any associations with the famed archaeologist.

“I love it,” Ben says of the poster. “That sense of puffery is show biz.”

The rise of chromolithography—a color printing technique that involved transferring sketches onto stone printing slabs and adding colors in layers, each color typically needing its own stone—bolstered magicians’ self-promotional flair. Chromolithography became increasingly popular in the wake of the American Civil War, in large part because it was cheap; by the 1880s, the process was widely used in advertising. A range of theater performers relied on chromolithograph posters to flaunt their talents, but magicians “really, really took advantage” of the technology, according to Cox. “They could absolutely grip you with their posters. They would plaster cities with these things.”

The posters may have been relatively inexpensive, but it took a team of skilled craftspeople to make them: art directors who would come up with the concept for the design, artists who specialized in tracing lettering and other motifs onto lithographic stones, still other artists who filled in the outlines with vibrant colors. Some companies were more highly regarded than others; in America, the Strobridge Lithographing Company was considered to be one of the best, creating ads for the likes of Kellar, Thurston and Houdini.

“Illusions: The Art of Magic” highlights a range of artistic styles and sensibilities. A poster by the Dangerfield Printing Company features a close-up portrait of a grimacing Houdini, trapped upside down in his water torture cell. A skeletal hand clutching a crystal ball stretches across an ad promoting the “seer” Alexander—an American performer (real name: Claude Alexander Conlin) who wowed audiences with his ability to read minds. Yet another poster, this one by Strobridge, depicts Kellar against a deep blue and vibrant orange backdrop, linking arms with a dastardly figure, probably Mephistopheles, as the duo drink red wine. (At least occasionally, Kellar’s inspiration sprang from non-satanic sources; his famed “Levitation of Princess Karnac” act, for instance, was pilfered from the English magician John Nevil Maskelyne.)

The diverse array of posters featured in “Illusions” is on loan from the McCord Museum in Montreal, which is home to the Allan Slaight Collection of more than 600 chromolithographs and 1,000 items related to Houdini. Arguably still the world’s most famous magician, Houdini is present throughout the exhibition; in addition to several of his chromolithograph ads, one of his straightjackets is on display. But Ben says curators did not want to “go super huge” on the master escape artist. Instead, they sought to showcase a selection of posters that “introduce us to who the prominent players were that, with few exceptions, time has forgotten.”

One section of “Illusions” spotlights the little-known female magicians of the Golden Age. Women make frequent appearances in the exhibition’s posters as the passive objects of male showrunners’ tricks: they are levitated, decapitated, sawed in half, shot through with arrows. But some became successful headliners in their own right. Adelaide Herrmann, for instance, was married to the French performer Alexander Herrmann, one of the most popular magicians of the late 19th century. She began her magic career as Alexander’s assistant, but when he died in 1896, she took over his act. Adelaide wore pants and a white blouse on stage, levitated and decapitated female assistants, and caught bullets with her bare hands. Audiences in North America and Europe loved her, and she toured major vaudeville circuits until she was in her seventies. A poster on view at the AGO hints at her supremacy within the field. She is depicted alone, wearing a sumptuous dress of red, blue and gold. “Adelaide Herrmann,” the text reads, “Queen of Magic.”

The exhibition also calls attention to the appropriation and caricaturing of Eastern cultures by Golden Age magicians, an unsettling practice that is evident in many of the posters on display. Fueled in part by the advent of railroads and steamships, which opened up new lands to Western travelers, Americans and Europeans of the 19th century developed a fervent fascination with the Middle East, North Africa and Asia—a fascination that in turn inspired exoticized representations of the East in art, literature and even interior decorating trends. Magicians, ever the opportunists, freely took advantage of the craze.

In one corner of the gallery hangs a poster depicting a man in a red robe and peacock feather cap, with a long braid dangling over his shoulder. White lettering announces the performer as “Chung Ling Soo”—whose real name was William Ellsworth Campbell Robinson. Born in New York in 1861, Robinson modeled his persona after Ching Ling Foo, a conjurer who did in fact hail from China. Robinson pantomimed his way through his acts, never speaking on stage—until 1918, when one of his bullet tricks went terribly wrong and he received a mortal wound. “Oh my God,” Robinson reportedly cried out in perfect English. “Something’s happened. Lower the curtain.”

Orientalism was not the only idea that magicians incorporated into their stage acts. When spiritualism, a religious movement rooted in the idea that the souls of the dead can communicate with the living, took off in the mid-19th century, some magicians began bringing supernatural elements to the stage. Thurston, who reportedly believed in spiritual phenomena, performed “Spirit Cabinet” illusions. The magician might place a tambourine, cane and bell into an empty cabinet and close the door. Suddenly, the props would start rattling—a sign that the spirits were present. The effects would build from there, with objects like a large sphere or a handkerchief floating out of the cabinet. In one of his ads, Thurston can be seen gazing down at a skull, ephemeral figures and disembodied arms swirling around his head. The bottom of the poster asks a question that was likely on the minds of many of his fans: “Do the spirits come back?”

When it comes to how magicians of the Golden Age carried out their spirit-conjuring, bullet-catching, straight-jacket-busting feats, “Illusions” does not reveal any secrets, preserving the sense of intrigue that performers sought to create from the moment they plastered their ads around town.

“These posters really ignited the imagination, because they played on mystery,” Ben says. The goal, he adds, was not simply to pull a fast one on audiences; Golden Age magicians created immersive experiences that opened people up to new worlds, realms and possibilities.

“You don't see performers in this advertising saying, ‘We'll fool you,’” Ben notes. “They want to take you on a journey.”