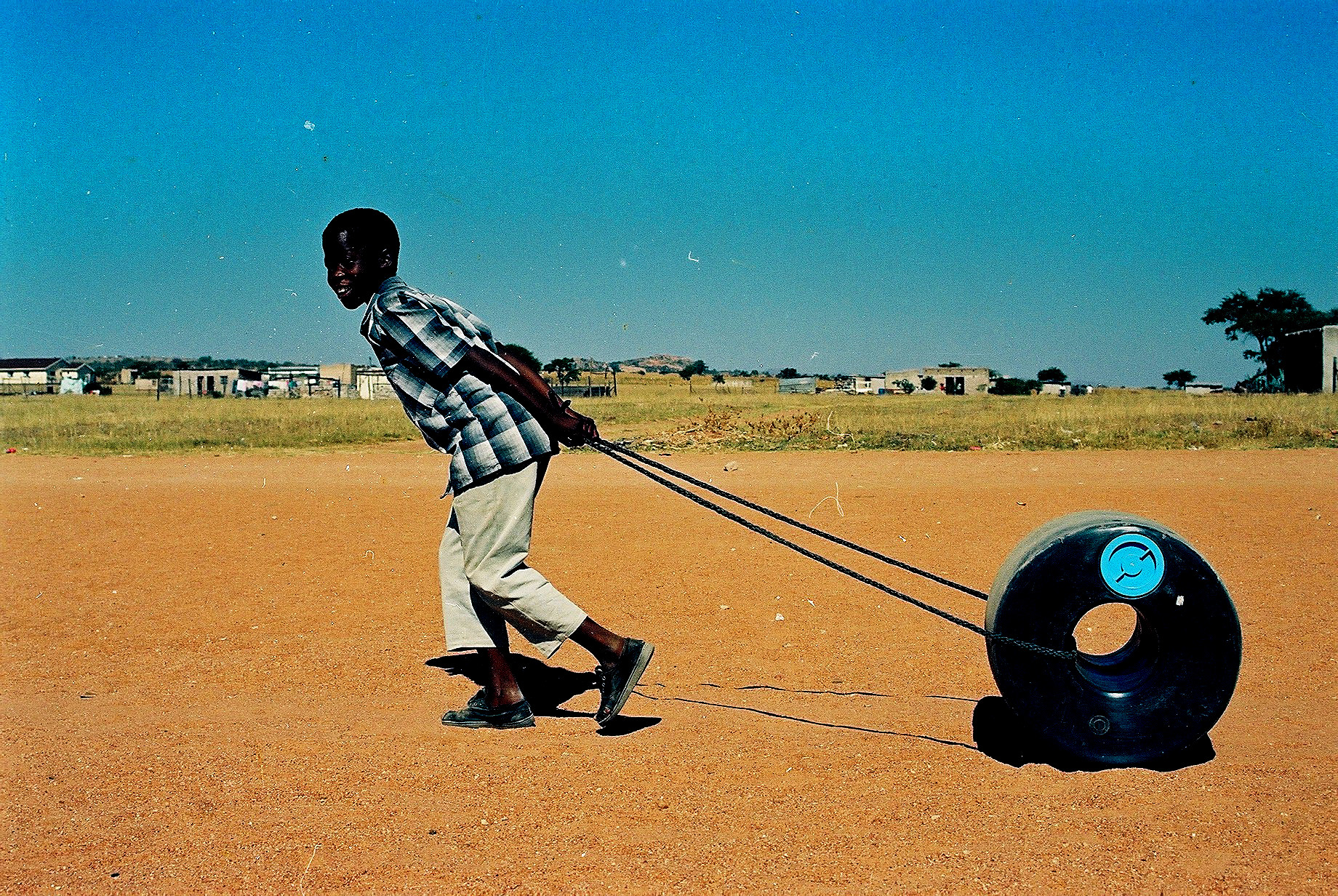 What’s most interesting about the above photo is not the brilliantly colored African landscape or the Seydou Keita-meets-Cartier Bresson fine art appeal, it’s that blue plastic Lifesaver-shaped thing that the boy is tugging along behind him. It’s called a Q Drum and has saved millions of lives since it was designed in 1993. It is currently sitting in the garden of the Smithsonian’s Cooper-Hewitt, National Design Museum, in New York City.

The Q Drum is basically a giant, rolling canteen. Designed and manufactured by South Africa-based Kaymac Rotomolders and Pioneer Plastics, it provides a way to easily transport about 20 gallons of clean, potable water to rural African villages that may be many miles away from reliable water sources.

The Q Drum—simple, cheap, and unifunctional—doesn’t fit the typical definition of “design," but neither do the other objects on view in “Design for the Other 90%," an exhibition of affordable and socially responsible objects designed for the more than five billion people in the world (90% of the world’s total population) that often lack the means to purchase even the most basic goods. (Read more about the exhibit in this Smithsonian article.)

Not surprisingly, the objects fall into categories that echo basic survival needs, including water, shelter and health/sanitation. Other works address issues of energy, education, and transportation. A walk through the campsite-style exhibition will introduce you to such objects as temporary, biodegradable emergency shelters; solar-powered, rechargeable hearing aids; low-cost, waterproof prosthetic limbs; a straw that functions as a personal water purification tool; and a laptop computer for kids that retails for $100.

But, lurking as it is in the shadow of the superslick objects and technologies of the Cooper-Hewitt’s Design Triennial (also now on view), is this stuff really design, and do the creators of objects like the Q Drum think of themselves as designers? According to Cheryl Heller, a member of the exhibition’s design advisory council and CEO of Heller Communication Design, the answer is, well, sort of.

"I have worked for many years as a designer, but have always found the term limiting," Heller says. “I believe that the act of creation, and real innovation, are beyond labels, and can take place anywhere people take the time to understand the context of a challenge, and are willing to think about things in a new way."

Barbara Bloemink, who conceptualized the exhibition while curatorial director of the Cooper-Hewitt and also served on the advisory council, believes that the innovations featured in the exhibition pack a powerful punch. “My hope is that the works raise public awareness not only of the tremendous need for objects like these in over 60 percent of the world, but also to see the human ingenuity, using very simple parts and materials, and how a single person’s work can affect millions of people in a positive way."

“Design for the Other 90%" is on view through September 23, 2007 at the Smithsonian’s Cooper-Hewitt, National Design Museum.